Earlier this week, the South Carolina Senate voted overwhelmingly to remove the Confederate battle flag from the state capitol grounds. There was some concern that the House chamber might pose a more difficult challenge.

But an impassioned plea (YouTube) from  Summerville Rep. Jenny Horne, a descendant of Confederate President Jefferson Davis, moved her colleagues to vote for removal of the flag. Lawmaker: Rep. Jenny Horne’s Confederate flag speech ‘key’ to getting it down: 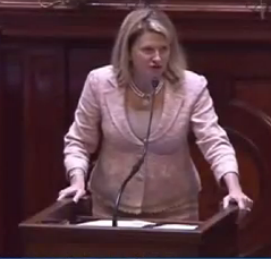 Horne said anything less than removing the flag is an insult to the family of slain Lowcountry lawmaker Sen. Clementa Pinckney. Pinckney, the pastor of Emanuel AME Church in Charleston, and eight of his parishioners were shot to death on June 17 during a bible study at the church. Accused killer Dylann Roof, 21, posed waving the Confederate flag in photos posted on a website where a racist manifesto gave a rationale for the attack.

“The people of Charleston deserve immediate and swift removal of that flag from this grounds,” Horne said. “I cannot believe that we do not have the heart in this body to do something meaningful such as take a symbol of hate off these grounds on Friday.”

Horne, who was first elected to House District 94 in 2008, went on to say that she is a descendant of Confederate President Jefferson Davis.

“But that does not matter,” she said. “It’s not about Jenny Horne. It’s about the people of South Carolina who have demanded that this symbol of hate come off the Statehouse grounds.”

“I thought she captured what the whole debate was all about and it shows her compassion. It shows her feelings for people,” said Mack, who also considers Horne a friend. “It shows her integrity.”

He said Horne’s status as a white, Republican female made her remarks more powerful. And Mack said Horne “so passionately laid out what we had a opportunity to do, to continue to heal the Charleston community and the state of South Carolina. … She was a key element in getting that done.”

The low-profile move came Tuesday evening after a brief debate on a measure funding the National Park Service, which maintains 14 national cemeteries, most of which contain graves of Civil War soldiers.

The proposal by Rep. Jared Huffman, D-Calif., added language to block the Park Service from allowing private groups to decorate the graves of southern soldiers with Confederate flags in states that commemorate Confederate Memorial Day. The cemeteries affected are the Andersonville and Vicksburg cemeteries in Georgia and Mississippi.

The flag ban was adopted by a voice vote. The Park Service funding bill is scheduled for a vote on Thursday.

Plans to reconsider the prohibition had been set for a vote on Thursday afternoon, but House Republicans abruptly scrapped the vote. House scraps vote on Confederate flag in federal cemeteries:

“What exactly is the tradition of the Confederate battle flag that we’re supporting?” Rep. Hakeem Jeffries, D-N.Y. challenged supporters of the proposal, shortly before the GOP leadership announced its decision.

“Is it slavery, rape, kidnap ,treason, genocide or all of the above?”

No Republican rose to respond.

Democratic protests aside, the vote was slated for a particularly awkward time — hours after the South Carolina Legislature voted to remove the same flag from a pole on the grounds of the State capitol.

The decision abruptly halted debate on legislation providing funds for the Interior Department and related agencies, and marked the latest in a string of developments relating to the Confederate flag in the House.

The TanMan, Weeper of the House John Boehner, surprised everyone with this announcement: Boehner wants Confederate symbols in Capitol reviewed:

Boehner (R-Ohio) said he would soon create an informal bipartisan group to review all matters related to the display of Confederate memorabilia, likely to include those in the U.S. Capitol.

Boehner also sidelined legislation that would provide annual funds for the Interior Department after Southern lawmakers pushed to get a vote that would allow for brief displays and sales of the flag in national cemeteries.

The vote, even if it failed, would have been an embarrassment to Republicans leaders who have tried to move beyond the old fights over the Confederate flag in the wake of the killing of nine African American worshippers inside Charleston’s historic Emanuel AME Church. Boehner was among national Republican leaders who embraced Haley’s role in removing the flag, and he pointedly said Thursday that he did not believe Confederate flags should be displayed in national cemeteries.

Boehner said the working group of Democrats and Republicans would have a broad mandate to review all issues related to Confederate symbols and then make bipartisan recommendations for the full Congress to consider.

Democrats responded by reintroducing a resolution that would have mandated the removal of Mississippi’s state flag from display on U.S. Capitol grounds, because it displays the Confederate “Battle Flag.” That resolution, offered by House Minority Leader Nancy Pelosi (D-Calif.), was tabled on a mostly partisan vote that referred it to a committee.

UPDATE: The House voted 238-176 to refer the Pelosi measure to the House Administration Committee for further review, on a largely party-line vote. Rep. Curt Clawson (R-Fla.) was the only Republican to side with Democrats on the Confederate flag. Rep. Mia Love (Utah), the only female black Republican in Congress, briefly voted “present” before changing her vote in favor of referral in the final moments of the roll call.

Those Democratic moves left Boehner angry over what he saw as the rejection of his attempt to defuse the issue. “The Speaker offered a thoughtful and responsible way to address this issue and Pelosi responded with a cheap political stunt,” Kevin Smith, Boehner’s spokesman, said.

Other Democrats have called for the removal of statues of Jefferson Davis and other Confederates that are prominently displayed in some corners of the Capitol. Democrats seized on the potential amendment vote in a series of floor speeches Thursday morning that accused Republicans of embracing a symbol many view as racist.

This would realistically apply only to two in the Deep South, one in Vicksburg, Miss., and another in Andersonville, Ga., which are the resting grounds for both Union and Confederate soldiers.

Members of the Georgia and Mississippi delegations objected to the amendment that would abolish that tradition, and they threatened to withhold support for the overall legislation funding the Interior Department.

Expecting no Democratic votes for the bill — it includes steep cuts to domestic agencies — GOP leaders then lacked the votes to approve the overall legislation if the southern conservatives did not get their way on the Confederate flag. Late Wednesday night, senior Republicans signaled they would give them their vote to allow for the flag display, but by Thursday morning amid the uproar, Boehner moved to quash the fight.

The speaker, asked whether his review would include Confederate symbols in the Capitol, signaled it would review all aspects of the issue.

For those of you who have never been to our nation’s Capitol, this includes quite a few “Confederate symbols,” including several statues in the National Statuary Hall. Numerous statues of Confederate figures such as Jefferson Davis, the president of the Confederate States, and  General Robert E. Lee, commander of the Confederate Army of Northern Virginia, are on display in the Capitol.