Home/AZ Politics/Starbucks to open at McCain’s Sedona compound!
Previous Next 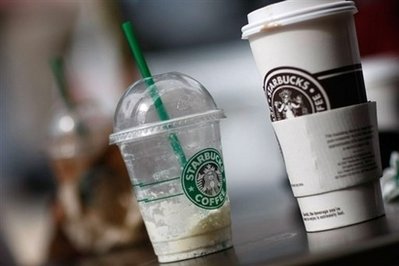 John McCain has been mocked in the media for his morning ritual of taking a nine vehicle secret service caravan to the local Starbucks in Sedona for his cup of cappuccino. Los Angeles Times ("A nine-car motorcade took him to a nearby Starbucks early in the morning, where he ordered a large cappuccino.") Star.Tribune (AP/New York Times) ("While the political spotlight was on Obama and Biden in Springfield, Ill., McCain reduced his public appearances to coffee runs to Starbucks.")

A friend of mine commented, "now we know why McCain wants to ‘drill here, drill now’ – its so he can waste gas driving nine SUV’s into town for a freakin’ cappuccino run!"

Rather than face any more public scrutiny over cappuccino-gate, the McCains have decided to retreat behind the security of their Sedona compound.  Mac’s sugar momma has bought him his very own Starbucks franchise for the Sedona compound, complete with a live-in barista on their household staff so that Mac can enjoy his cup of cappuccino any time, day or night.  It’s good to be rich.  Just ask Paris Hilton.