Donald Trump’s consigliere (fixer) Michael Cohen once said he would “take a bullet for Donald Trump.”

But today Michael Cohen entered into a plea deal with the U.S. Attorney for the Southern District of New York and agreed to be a cooperating witness. Just call Mikey Flipper today.

In acknowledging the charges against him, Cohen said he was directed to violate campaign law at the direction of a candidate for federal office. At the same candidate’s direction, he said he paid $130,000 to somebody to keep them quiet, which was later repaid by the candidate. He didn’t identify the candidate or the person who was paid, but those facts match Cohen’s payment to Clifford [Stormy Daniels] and Trump’s repayment.

The prosecutor told the judge the purpose of the payments was to ensure that the individuals did not disclose “alleged affairs with the candidate.” Besides the $130,000 payment, Cohen admitted to making an illegal contribution of $150,000, which was how much McDougal received from the National Enquirer’s publisher to quash her story.

Michael Cohen, President Donald Trump’s former personal attorney, pleaded guilty Tuesday afternoon to eight counts of tax evasion, bank fraud and campaign finance violations, including two counts related to hush money payments made to women — and said he made the payments “at the direction of the candidate,” meaning Trump.

Asked if he knew that what he did was illegal, he told the court yes.

Cohen told the court that he and an executive from a media company, at the direction of a federal candidate, arranged to keep one of the alleged affairs from the public with a payment of $150,000. McDougal and her lawyers have said that the National Enquirer, run by Trump associate David Pecker, paid her $150,000 in August 2016 as part of a “catch-and-kill” strategy to keep the story from circulating publicly.

He told the court Tuesday that after using the money from the loan for the payment, he was reimbursed by the unnamed candidate.

Cohen’s plea deal does not include a provision that he must cooperate as a witness in federal investigations, according to one source. It includes a recommendation of jail time by prosecutors, and one source said the recommended sentence could range from three to six years.

It is not unusual that a cooperation agreement is not articulated in the plea deal, and it is not mentioned in open court (it is frequently under seal). The simple fact remains that there would not be a plea deal here if Michael Cohen is not cooperating in some respect with the U.S. Attorney. We just don’t know the extent of his cooperation.

Now that the criminal case against Michael Cohen is wrapping up, this should allow Stormy Daniel’s lawyer Michael Avenatti to obtain an order lifting the stay in his civil lawsuit against Donald Trump. As you might imagine, Avenatti is jubilant. 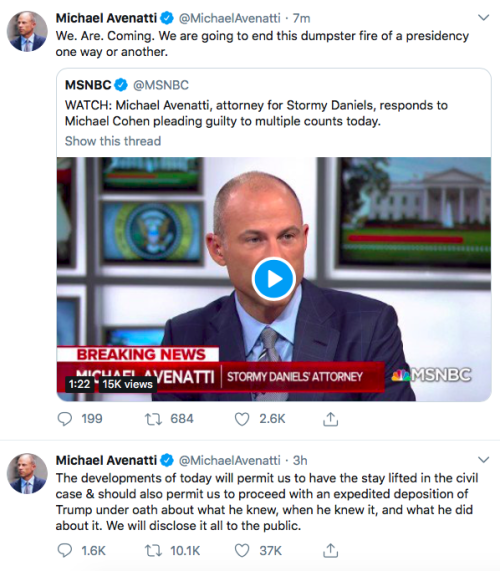 Occurring almost simultaneously, the jury in the first trial of former Trump campaign manager Paul Manafort came back with a guilty verdict on eight counts, but were hopelessly deadlocked on the ten other counts, for which the judge — whose own shockingly unprofessional conduct during trial in commenting on the evidence, the witnesses, and even the prosecutor’ appearance and demeanor likely influenced the jurors and led to the deadlocked counts — declared a mistrial.

Paul Manafort, President Trump’s former campaign chairman, was convicted on Tuesday in his financial fraud trial, bringing a dramatic end to a politically charged case that riveted the capital.

The verdict was a victory for the special counsel, Robert S. Mueller III, whose prosecutors built a case that Mr. Manafort hid millions of dollars in foreign accounts to evade taxes and lied to banks repeatedly to obtain $20 million in loans.

Mr. Manafort was convicted of five counts of tax fraud, two counts of bank fraud and one count of failure to disclose a foreign bank account. The jury was unable to reach a verdict on 10 of the 18 counts and the judge declared a mistrial on those charges.

Mr. Manafort faces a second criminal trial next month in Washington on seven other charges brought by the special counsel, including obstruction of justice, failure to register as a foreign agent and conspiracy to launder money.

The Washington Post adds, Manafort convicted on 8 counts; mistrial declared on 10 others:

The jury convicted Manafort on eight of the 18 counts against him and said it was deadlocked on the other 10. U.S. District Court Judge T.S. Ellis declared a mistrial on those charges.

The charges on which the jury deadlocked included three counts for not filing a form to report a foreign bank account, and seven for committing bank fraud or conspiring to commit bank fraud.

Once the jury left the courtroom, Ellis asked Manafort to approach the lectern. The judge told Manafort that he would be ordering a pre-sentencing report and it was important for Manafort to “pay careful attention to the preparation of the document.” Manafort, in a black suit, listened as the judge explained the pre-sentencing process.

Manafort’s guilty verdict may strengthen Mueller’s hand as he continues to investigate possible conspiracy and seeks an interview with the president; an acquittal could have led to a broader effort by conservatives to shut down the special counsel’s office.

Donald Trump continued his “witch hunt” assault on the Special Counsel in comments to the press on his way to another Trump Nuremberg Rally in West Virginia tonight,  saying today’s convictions do not involve Russians and collusion with the Russians by his campaign.

The Special Counsel has indicted the Russian troll farm, and has indicted Russian military intelligence (GRU) who ran the interference campaign in the 2016 election. Those indictments referred to Americans with whom the Russians were in contact.

UPDATE: As if right on cue: Michael Cohen’s attorney, Lanny Davis, in an interview on the Rachel Maddow Show said that Cohen has knowledge that should be of interest to Robert Mueller and he is happy to tell Mueller what he knows about the “possibility of a conspiracy to collude and corrupt the American democracy system in the 2016 election” and also what Trump knew about computer hacking of the DNC. Cohen more than happy to tell Mueller all that he knows: attorney (video).

Nathan Davis would like to bring a Teacher’s Voice to the...

My Darkest Concern: The Pandemic Coup