During the 2016 general election, Donald Trump made the central theme of his campaign the unsupported notions that there would be mass voter fraud and that the election was “rigged” against him to explain his expected impending loss.

Trump also refused to say whether he would accept the outcome of a vote in which he lost. In the third presidential debate, Chris Wallace, the moderator, kept pressing the Republican nominee about whether he’d accept the outcome. “I’ll keep you in suspense,” Trump said. Donald Trump and the Day After the Election.

Due to Trump’s shocking upset win in the anti-democratic Electoral College (he decisively lost the popular vote), America was spared the high drama of learning just how far Donald Trump and his sycophant cult followers would go if he disputed a “rigged” election.

Most Americans have forgotten about the uncertainty and fear of this moment in time. Michael Cohen has not forgotten.

Michael Cohen knows the darkness in the soul of Donald Trump, and in the closing statement of his testimony on Wednesday he had a chilling warning for Americans. Michael Cohen’s parting shot: I fear what happens if Trump loses in 2020:

Michael Cohen closed his remarkable testimony before Congress on Wednesday with an opaque but alarming warning about what could happen if President Donald Trump loses the 2020 election and some words addressed directly to his former boss.

“My loyalty to Mr. Trump has cost me everything: my family’s happiness, friendships, my law license, my company, my livelihood, my honor, my reputation and, soon, my freedom. And I will not sit back, say nothing, and allow him to do the same to the country,” Cohen said at the hearing’s closing. “Indeed, given my experience working for Mr. Trump, I fear that if he loses the election in 2020 that there will never be a peaceful transition of power, and this is why I agreed to appear before you today.”

Last Wednesday we learned that the FBI had detained a Coast Guard lieutenant named Christopher Hasson, filing a motion stating that he “intended to murder innocent civilians on a scale rarely seen in this country.”

According to WMAR-TV, federal agents found 15 firearms and 1,000 rounds of ammunition in Hasson’s apartment. Moreover, investigators found deleted e-mails in which Hasson allegedly mused about a “two-pronged attack” consisting of a bioterror assault followed by a sniper attack, and also ones in which he bragged about being a white nationalist…

The day after that was reported, Joe DiGenova [who at one time was hired to be Trump’s personal attorney in the Russia investigation before he was dismissed] was a guest on Laura Ingraham’s radio show and said this:

We are in a civil war in this country. There’s two standards of justice, one for Democrats one for Republicans. The press is all Democrat, all liberal, all progressive, all left – they hate Republicans, they hate Trump. So the suggestion that there’s ever going to be civil discourse in this country for the foreseeable future in this country is over. It’s not going to be. It’s going to be total war. And as I say to my friends, I do two things – I vote and I buy guns.

What you have is a former U.S. Attorney suggesting that civil discourse is impossible in this country because, as Trump says, “the press are the enemy.” Therefore, if their brand of Republicanism isn’t successful at the ballot box, second amendment remedies are the option.

Following DiGenova’s comments, Sebastian Gorka [a former deputy assistant to President Donald Trump, now a contributor at Fox News] thought the subject of a civil war in this country was fodder for further discussion. 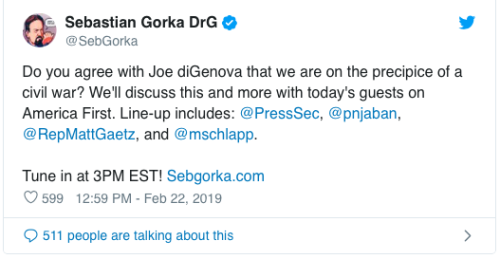 As David Neiwart documents, talk of a civil war has been circulating among extremist groups for some time now. In the Trump era, it is beginning to emerge in “the mainstream of conservative-movement discourse.”

On many occasions, this president has overtly affirmed the use of violence. But combined with his appeals to a past when white males were dominant, Trump feeds the notion that this country never put our previous civil war to rest. For many of his followers, the Confederate worldview is still very much alive.

The essence of the Confederate worldview is that the democratic process cannot legitimately change the established social order, and so all forms of legal and illegal resistance are justified when it tries…

The Confederate sees a divinely ordained way things are supposed to be, and defends it at all costs. No process, no matter how orderly or democratic, can justify fundamental change.

I don’t mean to be an alarmist, but this is what scares me the most about our current situation. That is why it is imperative that someone like Joe DiGenova gets called out for the kind of inflammatory rhetoric he spouted last week.

The migration of talk about civil war from extremists into mainstream conservative discourse is incredibly dangerous. We’ve been fortunate that individuals like Cesar Sayoc and Christopher Hasson have been caught before they killed anyone. But conservatives are dancing very close to a treacherous cliff.

Donald Trump, with his incessant efforts to delegitimize American elections and institutions (the Department of Justice, U.S. Intelligence Agencies, federal courts, Congress, the media) is laying the groundwork for a revival of his 2016 campaign themes of mass voter fraud and claims the election is “rigged” against him. This time he actually wields the power of the presidency. The egomaniacal Trump is unlikely to concede defeat and voluntarily surrender power — as have all previous presidents. As Michael Cohen warns, “I fear that if he loses the election in 2020 that there will never be a peaceful transition of power.”

UPDATE: The Washington Post reports, “A tumultuous couple of weeks in American politics seem to have raised the rhetorical flourishes to a new level and also brought a troubling question to the surface: At what point does all the alarmist talk of civil war actually increase the prospect of violence, riots or domestic terrorism?” In America, talk turns to something unspoken for 150 years: Civil war.

History has shown this is what happens when a country is led by a demagogue who is the cult leader of an authoritarian cult of personality. It can happen here.

‘Bounty Gate’: The experts speak – Trump knew and has done nothing