Donald Trump sold two lies to his simpleton MAGA supporters: that “I am the greatest deal negotiator” — a self-manufactured myth blown up this week in Decade in the Red: Trump Tax Figures Show Over $1 Billion in Business Losses — and that “trade wars are easy to win.”

The self-described “Tariff Man” has failed again to negotiate a trade deal with China. And to prove he is “tough” to his simpleton MAGA supporters, he just doubled tariffs on $200 billion of Chinese imports, escalating U.S.-China trade war: In Beijing, the Commerce Ministry said China “deeply regrets” the decision to increase the tariffs and “will have to take necessary countermeasures.” China, Defiant but Careful, Promises Aggressive Response to Tariffs: “Before Friday’s tariff increase, multiple state media outlets had published a cryptic, anonymously written article with the headline, ‘If You Want to Talk, We Can Talk. If You Want to Fight, We’ll Fight.'”

President Trump said in a Twitter thread Friday that China is paying billions of dollars to the U.S. Treasury due to tariffs hours after he reignited the trade war with a tariff spike. This is a claim he’s made before, including back in January, when he said it twice during a press conference and on Twitter. Trump is wrong on how China tariffs work:

Reality check: The tariffs are paid by U.S. importers of affected Chinese goods, not by China’s government or by Chinese companies. Importers then either raise costs on consumers, lower their own profit margins or both.

President Donald Trump is justifying raising tariffs on Chinese imports on grounds they are helping the U.S. economy and are mostly paid by China. The opposite is true, economists say.

According to data from U.S. Customs and Border Protection, almost $15.3 billion in duties imposed by the Trump administration last year were assessed on imported goods from China as of April 10. Actual collections could lag and be lower with refunds and other factors.

While Trump has suggested on Twitter and in public comments that tariffs are somehow being charged to or paid by China, economists say that’s misleading. U.S. importers are responsible for the duties, and ultimately U.S. businesses and consumers pay through higher costs, they say.

“Our results imply that the tariff revenue the U.S. is now collecting is insufficient to compensate the losses being born by the consumers of imports,” a study published in March by economists from the Federal Reserve Bank of New York, Princeton University and Columbia University concluded.

A separate paper published in March by economists Pinelopi Goldberg, the World Bank’s chief economist, Pablo Fajgelbaum of UCLA, Patrick Kennedy of the University of California, Berkeley, and Amit Khandelwal of Columbia Business School also found that consumers and U.S. companies were paying most of the costs of Trump’s tariffs.

It also went a step further: After factoring in the retaliation by other countries, it concluded the main victims of Trump’s trade wars had been farmers and blue-collar workers in areas that supported Trump in the 2016 election.

“Workers in very Republican counties bore the brunt of the costs of the trade war, in part because retaliations disproportionately targeted agricultural sectors,” the authors wrote.

The tariffs will “drive down exports, and suppress job gains for the industry by as much as 400,000 over 10 years. It will also invite China to hit back at American businesses, farmers, communities, and families,” said Kip Eideberg, vice president of government affairs for the Association of Equipment Manufacturers, which represents more than 1,000 U.S. makers of farm, construction and mining machinery.

“With producers already struggling with falling commodity prices, additional retaliatory tariffs on U.S. agricultural exports will have a chilling effect on equipment manufacturers,” Eideberg said in a statement after the penalties went into effect.

Once again, Trump is proposing more agriculture subsidies to farmers to offset their losses from his tariffs (some would call this federal assistance “bribery” to retain farmers’ votes). Trump Says U.S. Will Buy Crops to Offset China Losses:

Trump said on Twitter on Friday that the U.S. will use its money from tariffs [i.e., from American importers] to buy American agricultural products “in larger amounts than China ever did” and send it to “poor and starving countries” for humanitarian aid. The president indicated potential purchases of $15 billion from farmers.

First of all, this is the very government-managed redistribution of the economy that Republicans wanted to deride as “socialism” in the 2020 election. Remember when Republicans decried picking winners and losers in a free market economy? We are all socialists now.

Secondly, is this foreign aid — which Republicans routinely oppose — going to countries that Donald Trump has derided as “shithole countries”? How about sending this aid to our fellow American citizens in Puerto Rico, something Republicans also oppose. Just sayin’. House Approves Disaster Relief and Puerto Rico Aid Over Trump’s Opposition.

As a major exporter of soybeans, one of the U.S. exports long targeted by China, Louisiana will be especially hard hit by the trade war. 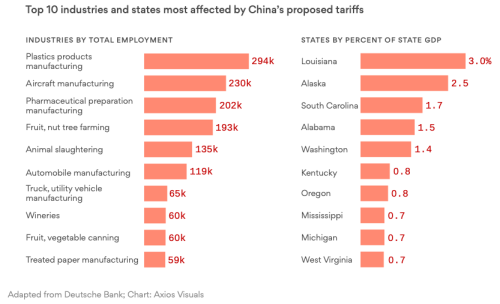 Chinese tariffs also targeted petrochemical-heavy industries like plastics products in the second and third rounds of retaliation as the U.S. chemical industry began the first wave of more than $200 billion in new and planned infrastructure, S&P Global Platts notes.

Alex Camara, CEO of Audio Control in Seattle, on a call Thursday with reporters organized by the National Retail Federation, said “It frustrates me a little when I see headlines that tariffs are a tax on the Chinese economy. No, they are not. They are a direct impact on the cost and cash I have to spend on employment and investment. This is a direct tax.”

This seems like a no-brainer, but it might need to be said: When the government collects money from tariffs, that money does not immediately translate into economic stimulus. There is no policy that, say, directly pipes cash into a highway fund from customs, or to taxpayers from a refund check. We are not just snatching money from China and blowing it on tank tops for everyone at American Apparel.

Most economists argue the opposite — that tariffs reduce economic activity by raising prices for consumers. That reduction thus far from the China tariffs is most likely small, but it is, in those calculations, almost certainly a reduction and not a rise.

Despite Mr. Trump’s proclamations, “China” is not paying the cost of the tariffs. Businesses and consumers — mostly American — are, like the owner and customers of your friendly neighborhood lighting showroom. Also, tariffs have not had a huge effect on prices yet, not because China is bearing them, but because, thus far, the additional taxes Mr. Trump has imposed on Chinese imports have not been large enough to budge the inflation rate more than a tenth of a percentage point.

The Federal Reserve Bank of San Francisco estimates that Mr. Trump’s initial wave of China tariffs raised consumer prices by 0.1 percentage point — and that a second wave would quadruple that effect. That means if Mr. Trump follows through and raises tariff rates, the pain could be much more noticeable to shoppers.

UPDATE: Trade talks between China and the United States ended on Friday without a deal as President Trump raised tariffs on $200 billion worth of Chinese imports and signaled he was prepared for a prolonged economic fight. Trump Renews Trade War as China Talks End Without a Deal:

Mr. Trump, who just weeks ago was predicting a signing ceremony for an “epic” trade deal with Chinese leader Xi Jinping, reclaimed his familiar stance of threatening China and insisting his aggressive approach would help the American economy. In a flurry of tweets on Friday, Mr. Trump warned that he would tax nearly all of China’s imports if Beijing continued to backtrack on a trade deal.

“Tariffs will make our Country MUCH STRONGER, not weaker. Just sit back and watch!” Mr. Trump said on Friday morning, adding that the Chinese “should not renegotiate deals with the U.S. at the last minute.”