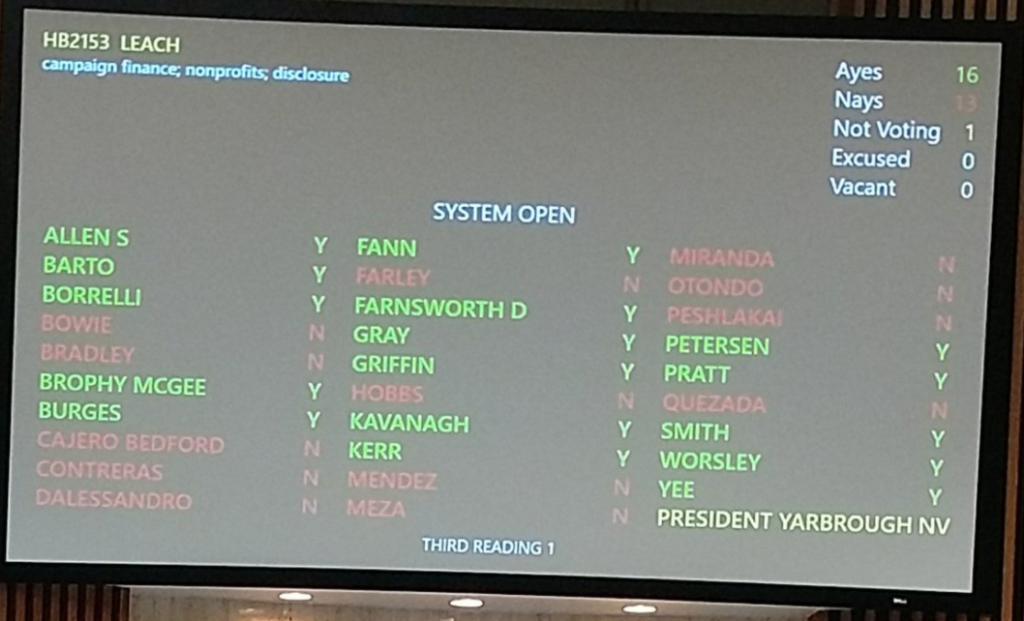 Update: Arizona lawmakers (again) sided with dark-money special interests instead of voters. The Senate passed HB 2153 by a 17-13 (party–line) vote. The bill now goes to the desk of Governor Doug Ducey to sign or veto.

One of the worst pieces of legislation ever produced by the Republicans in the state legislature is nearing a vote that would lock away the source of dark money in local Arizona politics.

The bill is a direct response to a city charter amendment in Tempe to require such disclosures. 91 percent of Tempe voters said “yes” to the political campaign transparency measure.

Leach’s HB2153 would throw a greater cloud of darkness over dark money political campaign contributions now made in secret by out-of-state contributors and notorious right-winger donors like the billionaire Koch brothers.

Condemnation of the dark money bill was swift:

“It would be a fool’s errand to pass that bill,” Tempe Councilwoman Lauren Kuby said  Wednesday, noting the overwhelming support the city measure received.

Sen. Steve Farley, D-Tucson, said, “If someone takes part in the political process, it should be something that takes part in the public. That transparency and accountability is the foundation of democracy,” Farley said. “If we make laws in private, if our political process takes place in private, if we don’t know who’s giving the money, then who’s going to trust the bills and laws we come up with here?”

Rivko Knox, of the League of Women Voters of Arizona, said this keeps voters in the dark about who is influencing elections. “Representative democracy is distorted when information is about who is providing significant funding for or against candidates, or proposed laws, is unavailable,” she said.

There is no benefit for the voting public to hide the sources of campaign contributions. A bogus argument was offered by Sen. Sylvia Allen, R-Snowflake, who said, “The problem is that the left will use this information and they harass businesses. They go after businesses, they go after individuals, and they make their lives so miserable when they find out that they’ve donated to a cause that they don’t agree to.”

There are no facts or evidence to support Allen’s paranoid view of the world.

Sen Steve Farley responded, saying that following Allen’s logic would mean that lawmakers could cast their votes in secret to prevent them from being harassed. And that, Farley said, makes no sense. “If someone takes part in the political process, it should be something that takes part in the public,” he said.

Ironically, the vote in the state Senate comes as an Outlaw Dirty Money voter initiative is quickly gaining ground.

Outlaw Dirty Money constitutional amendment, if approved at the polls in November, will ensure that we know what person or corporation was the original source of all major contributions seeking to influence an Arizona election. The initiative states: “The People of Arizona have the right to know the identity of the original source of all major contributions used to pay, in whole or part, for a campaign expenditure.  This right requires the prompt, accessible, comprehensible and public disclosure of original sources.”

Arizona has become the point of the dirty money spear. In the 2014 election, out of $28 million in non-candidate spending for statewide candidates, an estimated $18 million was dirty. That gives Arizona the highest participation of dirty money, as a percent of total election spending, in the entire country.