The Argument Against The Radical Conservative Supreme Court Justices

The Argument Against The Radical Conservative Supreme Court Justices

Just as they did in the infamous Bush v. Gore litigation in 2000, Republican lawyers are trying to get the Supreme Court to undermine state court rulings protecting voting rights under state law. Their theory? That state courts, by relying in part on state constitutions, are wrongly exercising power that belongs to state legislatures.

This idea that state constitutions are irrelevant, and that all that matters is what state legislatures say, is preposterous. Yet recent events suggest this wrongheaded theory may have some traction among the justices.

And this theory has huge consequences. It would mean that many of the decisions you are reading about, where state judges are applying state constitutions to protect the right to vote (say, by finding that ballots postmarked by Election Day will be counted, or that onerous witness requirements will be relaxed because of Covid-19) would now be fair game for the Supreme Court to reverse — even though these decisions are interpretations of state law by state courts.

So far, partisan attempts to involve the federal judiciary have failed, and rightly so. Early last week, the Supreme Court rejected an effort by Pennsylvania Republicans to overturn a Pennsylvania Supreme Court decision that votes postmarked by Election Day but received a few days later must be counted. The court deadlocked 4-4, letting the state court decision stand, with Chief Justice John Roberts joining the court’s three Democratic appointees in voting to leave undisturbed what the state court had done.

Now the Republican challengers are trying to bring the case back before the court, hoping to win support from its newest member, Amy Coney Barrett. We may see a similar push to overturn a second Pennsylvania Supreme Court ruling issued last Friday, also protecting state voters’ rights — this time to have their votes counted notwithstanding technical signature glitches in mail-in or absentee ballots.

Federal courts have no business interfering in state-law matters. As the three of us wrote back in 2000, the effort of several justices to hijack state law in Bush v. Gore was a disgrace. These justices asserted that the “Florida Supreme Court’s interpretation of the Florida election laws impermissibly distorted them beyond what a fair reading required.” Of course, “fair reading” meant how these justices read state law, not how Florida’s expert judges saw the matter.

No Supreme Court case before 2000 ever tried this maneuver to upend a decision by a state court on state law, and in Bush v. Gore itself, only three justices, led by the chief justice at the time, William Rehnquist, claimed that the federal Constitution made them the ultimate word on the meaning of state election codes. 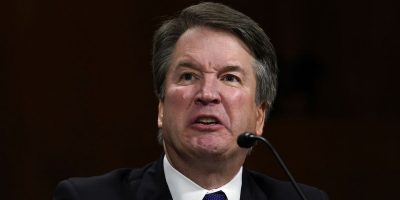 Until this week, only Justice Clarence Thomas, writing for himself, had ever invoked any aspect of Bush v. Gore as good law. But on Monday evening, ominously, Justice Brett Kavanaugh repeatedly endorsed Rehnquist’s Bush v. Gore concurrence, claiming that the Supreme Court should feel free to second-guess state court interpretations of state election law whenever presidential elections are at issue.

“The text of the Constitution requires federal courts to ensure that state courts do not rewrite state election laws,” he wrote in a footnote to a decision in which the court refused, 5-3, to extend Wisconsin’s deadline for receiving absentee ballots to six days after the election.

In fact, this part of Bush v. Gore has already been squarely rejected by a landmark 2015 case, Arizona Legislature v. Arizona Independent Redistricting Commission. Writing for the court in one of her greatest opinions, Justice Ruth Bader Ginsburg — who had emphatically dissented in Bush v. Gore — made clear that when Article I of the federal Constitution empowers the “legislature” of each state to regulate various aspects of congressional elections, the word “legislature” means the lawmaking process set up by a state’s constitution: Nothing in the federal Constitution, she said, “instructs, nor has this court ever held, that a state legislature” may regulate “federal elections in defiance of the provisions of the state’s constitution.”

Thus, when a state court construes a state election statute to align it with a state constitution’s right-to-vote principles, that state court is doing exactly what the federal Constitution and binding federal precedent authorize.

Justice Kavanaugh and the three other justices who wanted to jump into the Pennsylvania postmark dispute missed all this — a particularly striking lapse for jurists who say they are guided by the letter and spirit of the Constitution and by the basic rules of well-settled precedents. Indeed, just last year, the court, in a major opinion by Chief Justice Roberts, and joined by all the other dissenters in the Arizona Legislature case, and by Justice Kavanaugh, cited that case and squarely relied on its key holding.

Does it really make sense that your ballot in Pennsylvania will count for state elections but not the presidency — or federal House or Senate races, for that matter — because it arrives on Nov. 5?

The federal Constitution is emphatically clear and so is federal precedent. Any potential Supreme Court ruling to the contrary, especially any ruling with a partisan alignment, would be a disaster for the court and the country.

One Bush v. Gore is enough.

Two stolen elections in 20 years perpetrated by highly partisan Republicans on the Supreme Court would end the great American experiment with democracy as we know it. America has never recovered from the consequences of Bush v. Gore.

The radicalism we are seeing from the Supreme Court this week is reason and justification enough for aggressive judicial reform of the Supreme Court. These radical conservative justices are out of control.

Here is just a sampling of recent opinions for Supreme Court reform:

Emily Bazelon at The New York Times, The Supreme Court Is Picking a Fight It Is Destined to Lose: The elected branches won’t hesitate to put the court in its place.

Marshall Auerback at The Nation, It’s ‘Court Reform,’ Not Court Packing: Whatever they call it, Democrats should embrace fixing a Supreme Court that has become an unaccountable legislature in all but name.

Elie Mystal at The Nation, There Is Only One Solution to the Amy Coney Barrett Debacle: Yes, Democrats must expand the courts. Here’s why, and here’s how.

Adam Levitin at The American Prospect, Supersize the Supreme Court to Save It: Congress should effect a wholesale makeover of the Court by adding two dozen more seats.

Larry Kramer at The New York Times, It’s Time to Pack the Supreme Court. Again. A court packing spiral may be the only way to moderate the court.

Aaron Tang at The New York Times, Democrats, You Should Threaten to Pack the Court: It’s an incentive for the existing justices to moderate their views.

Paul Waldman at The Washington Post, There’s no more doubt: Democrats have to expand the Supreme Court: Mitch McConnell has shown them the way. They can do it, and they must do it.

E.J. Dionne, Jr. at The Washington Post, Enlarging the Supreme Court is the only answer to the right’s judicial radicalism.

Sean Illing at Vox, The case for stripping the Supreme Court of its power: If the Court is no longer a neutral arbiter of the law, if it’s gradually shape-shifting into a partisan weapon, then maybe it’s time to rethink its role in our constitutional system.

Kent Greenfield at The New York Times, I Love the Court. But We Need Another One. Enter the United States Constitutional Court.

Kia Rahnama at Politico, The Other Tool Democrats Have to Rein in the Supreme Court: Congress could also limit what kinds of cases the court can hear.

Steven Calabresi at The New York Times, One Term, 18 Years. That’s How the Supreme Court Should Work.

All of these ideas should be on the table for the bipartisan commission of judicial reform Joe Biden has endorsed. The justices have invited judicial reform on themselves.