Sometimes political satire is far more effective than straight news, especially when it is grounded upon the truth. David Fitzsimmons’ column today at the Arizona Daily Star is a classic. Fitz: Vouchers and vultures circle over our public education:

The governor’s chief of staff, Kirk Adams, handed Doug Ducey the numbers. “Governor, I’m proud to say we have the worst-funded public education system in the United States. We’re behind Mississippi and Albania.” Adams beamed. “And wherever Borat was from.”

The governor was animated. “Really, Adams? That’s fantastic. The question is, can we top that? Be creative! Ask yourself, ‘Can we do worse?’” 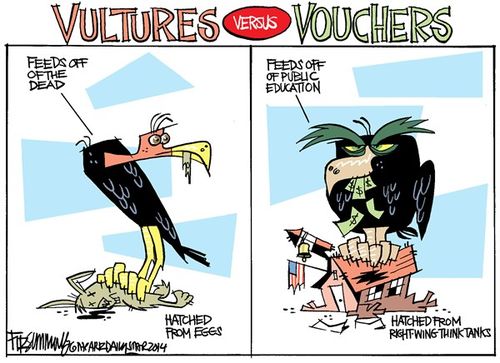 “Well, we have an idea brewing in the Legislature. What would happen if we expanded our vouchers scheme statewide to include everyone? It’s a great public education killer.”

“Okay. Our vouchers scheme will divert public school money to …”

“Steal! I like the sound of that. It’s gutsy. Bold. Honest!”

Adams took a deep breath. “Al-right-y then. Our vouchers scheme will steal taxpayer dollars from public education’s pitiful coffers — giggle — and redistribute those monies as subsides for private and parochial schools! And we’re calling it the ‘Empowerment Scholarship Account.’” 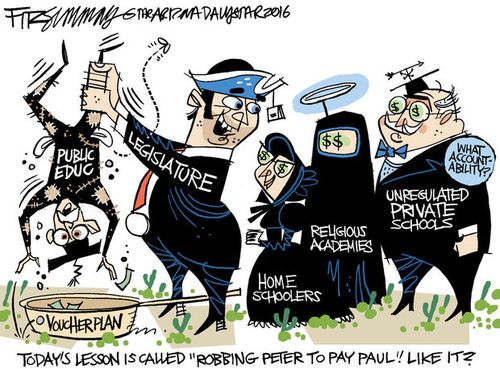 Adams pocketed the coupon.“We’re winning the fight, sir! I saw in the latest poll that 87 percent of Arizonans are getting sick of explaining the value of public education to Republicans. They’re desperate to accept Proposition 123. Throw a starving man a crumb and he’ll crawl to lick it off the sidewalk.”

“That’s wonderful, Adams.” The governor clapped him on the back. “Now it’s my turn. I have news for you, my favorite minion.” He paused and looked out over Phoenix. “I have a dream that one day all of our state’s kids will be eligible to get a private sector education — at public expense! Of course, we’ll have to snake around our state constitution to do it. Where there’s a will, and a powerful lobby, there’s a way! Right, Adams?” The governor drew Adams in close and whispered. “Listen, I do have a concern. I heard this might be great for low-income and special needs kids …” 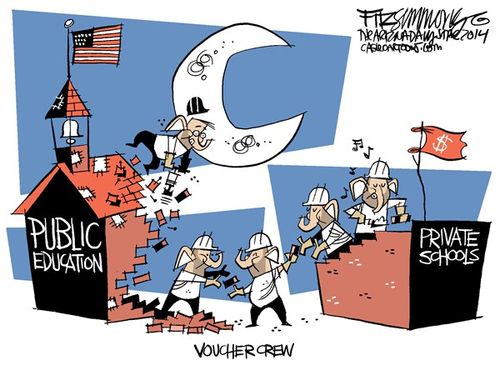 “Parents of poor kids can’t do that. They can’t cover the high tuitions — even with the subsidy. And the transportation just isn’t there. All we’re doing is redistributing wealth — upwards — to the rich kids.” Adams slapped Ducey on the back. “You’re the Bernie Sanders of the 1 percent, governor!”

“Thanks, Kirk! I was worried there for a minute. After working so hard to gut public education, to stop the voters’ sales tax initiative, to ignore the court order to restore funding, to slash the universities, to cripple JTED, to kill off adult education, to cut off all our community colleges, and after working so hard to drive good teachers away from our state in droves — after all that — I was concerned that we might be doing something constructive.”

“I can’t. Not as long as we still need to provide public education to the lazy have-nots …”

“Under our plan — who cares? The good news is this: Our public schools have fixed costs and crumbling buildings to maintain. With more cuts they’re doomed to wither and die. Here’s the bad news. The entire Tea Party is mad as hell because some Muslim-Americans may send their kids to Muslim schools. They say we’re funding madrassas on the taxpayer’s dime.”

The governor thought deeply. “If TUSD was teaching Juan and Juanita to revolt against this great country of ours — heaven knows what Ali and Jasmine are learning! I thought we regulated that kind of thing.”

Adams spoke calmly. “We don’t regulate private education, governor. Unlike our public schools, they’re completely unaccountable, unregulated and unchecked. There is no oversight. Home schoolers, private schools and parochial schools all operate in the dark. Remember, governor, we only use oversight and regulation to cripple public education.”

The governor got misty eyed. “Imagine! Under this plan — we’ll have a vast education system, unfettered by regulation.”

It’s not too late to stop this unconstitutional privatization of Arizona’s public school system. A final vote has not been scheduled. Contact your state legislators today to oppose House Bill 2482 and Senate Bill 1279.You should also oppose Senate Bill 1125, another bill the Legislature wants to reduce and eventually eliminate desegregation funding.

According to a report by the Arizona Center for Investigative Reporting, which analyzed public-school demographics: “While there are exceptions, when charter schools are compared to their neighborhoods and to other nearby schools, data shows that they are more likely to be whiter than the surrounding area, while district schools tend to over-represent Hispanic students.”

The traditional public schools impacted by all of this, along with the the children left behind, would decline even further.

Kill these bills. Then vote these lawless Tea-Publicans out of office in November.