Four years ago it was widely assumed that David Garcia would be elected Superintendent of Public Instruction. His opponent, Diane Douglas, barely ran a visible campaign for the office. But due to a GOP voter registration edge in Arizona and mindless GOP tribalism in the voter booth, Diane Douglas won in the shocker of the 2014 election.

Douglas has been controversial and a complete disaster during her tenure as Superintendent of Public Instruction. This is why she was defeated for reelection in the GOP primary back in August. Hindsight is always 20-20. These Republican voters should have been more discerning back in 2014 instead of voting out of GOP tribalism. They could have saved everyone a lot of unnecessary trauma from the antics of Diane Douglas. Republicans should keep this lesson in mind this year. 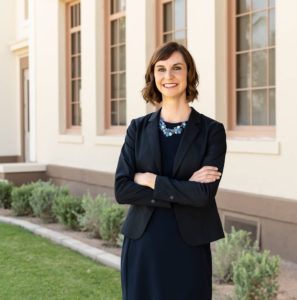 The race for superintendent of public instruction hinges on the answer to one simple question: Is experience or energy needed more?

The superintendent doesn’t have the power to boost teacher pay or raise taxes to bolster education funding, the two issues driving current education debates. That’s up to the Legislature, the state Board of Education and local school boards.

But this race matters because the winner will oversee the Department of Education – which is basically broken [after the disastrous tenure of Diane Douglas].

There has been heavy turnover during outgoing superintendent Diane Douglas’s tenure. Many experts have left, and morale is in the tank for those who remain. Not surprisingly, this office is no longer producing the helpful training, reliable policy direction and robust student-achievement data that Arizona’s public schools need.

It needs a fixer – someone who can break up the status quo and reinvigorate the department.

How would they fix the office?

The good news is Republican Frank Riggs and Democrat Kathy Hoffman are keenly aware of this problem and have pledged to make reform a top priority if elected.

Riggs says he would surround himself with “big cause, low ego” people, while Hoffman says she intends to fill key posts with people from diverse backgrounds and points of view, including those that differ from her own.

Both say they would prioritize improving morale and refocusing the staff on core values, such as customer service.

And that’s important, because the Department of Education does some big – if behind-the-scenes – things. It disburses $6 billion in funding to the state’s district and charter schools. It also oversees statewide programs like early childhood, special education, gifted education and English as a second language.

Where else are they alike?

Hoffman and Riggs agree on other big-picture issues facing Arizona’s 1.1 million public-school students, such as:

How do they differ?

So, who’s best for the job?

But here’s the clearest difference between the two candidates:

Riggs is 68. He served California in Congress [in the 1990s], where he chaired an education subcommittee. He was a member of a school board. He founded a charter school. He led a non-profit that helps charter schools grow.

In 2014, Riggs unsuccessfully sought the Republican nomination for Governor of Arizona, finishing last in the Republican primary with less than five percent of the vote.

Hoffman, by contrast, is 32. She is a political novice who taught in public schools for six years and participated in the #RedforEd walkout this spring.

She has the energy.

Hoffman pulled off a surprise upset of a far more experienced David Schapira in the primary. She is a quick study, with an amiable personality and the ability to listen and set clear goals. She also knows the stark realities teachers face – a perspective that would come in handy as the department re-evaluates how it can best serve the state’s public schools.

Hoffman must make good on her promise of hiring diverse, experienced administrators to be successful.

But if this spring’s walkout taught us anything, it’s that a new generation of teachers are fired up and ready to make a positive difference in politics.

Hoffman deserves the chance to put that energy into action.

A public school educator in charge of public education in Arizona – what a novel idea! Let’s do that.