The Arizona Republic today recommends a “no” vote on Prop. 126. If you hate taxes, Prop. 126 is a no-brainer, right? Well, not exactly:

The appeal of Proposition 126 is that it would prohibit imposing a sales tax on services in Arizona. 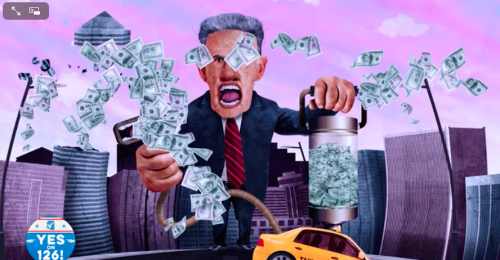 Why? Because in shielding services from being taxed, the Protect Arizona Taxpayers Act.

It may mean, for instance, a hike in marginal income-tax rates. Or a higher sales tax on goods.

Why nix an important revenue source?

Talk of new revenue took on greater urgency this year following the #RedforEd movement that prompted Gov. Doug Ducey to pledge a 20-percent raise in teacher pay and more money for schools over the next few years. Even with an improved economy, it’s uncertain whether there will be sufficient tax revenue to pay for it all.

The issue gains more relevance now that an education-funding initiative involving raising income taxes on the rich has been knocked off the Nov. 6 ballot.

If all services were taxed at the same 5.6 percent state sales tax rate for goods, the state could generate about $5 billion in new revenue, according to projections by the Arizona Department of Revenue. This would range from $454 million in doctor visits and $185 million in legal services to $18.7 million from beauty salons and $13.7 million from chiropractors.

Do we really need a preemptive strike?

This is a preemptive strike, spearheaded by the state’s Realtors association. For the most part, there’s no tax on services now.

Backers of Prop. 126 say low- and middle-income Arizonans would be helped because some services, like health care and child care, disproportionately impact them. Proponents argue that small service providers would be spared from having to pass costs on to consumers, or to eat some of the costs to maintain business.

They also say that a service tax would effectively stifle entrepreneurship and slow Arizona’s economy.

Are states clamoring to raise taxes?

The campaign by Prop. 126 proponents seeks to portray greedy lawmakers out to prey on unsuspecting consumers. They point to a growing number of states, including North Carolina and Washington, that have in recent years levied or raised taxes on services. They say Arizona lawmakers considered similar legislation as recently as 2016.

But while North Carolina did impose a tax on services, that state also cut income tax rates at the same time. The 2016 Arizona House bill essentially aimed to take the same approach — expand the tax base by taxing services but minimize the impact on business operators by reducing the income-tax rates.

And in Washington, the controversy was over Seattle’s head tax proposal — a tax on the jobs of giant employers — to help pay for for homeless programs. The city council there reduced the proposed tax by almost half after Amazon and other companies pitched a fit.

Are these acceptable consequences?

The measure aims to amend the state Constitution which, if passed, means the change would be voter protected — that is, the Legislature would not be able to ever impose a new or increased tax on services.

Prop. 126 also doesn’t include any legal definition of “services,” which may freeze at the current level some sales taxes on goods that could be argued in court are actually services — taxes we pay at restaurants and bars is an instructive example.

As Republic columnist Robert Robb points out, that could mean “that the sales tax the Legislature approved to replace the existing dedicated education sales tax … would produce a third less of the revenue expected.”

More important are the unintended consequences. By banning one kind of tax, the measure exposes Arizonans to other types of new or increased taxes.

That’s not a small point. Not when Arizonans already face sales taxes on goods of 9 percent on more in Phoenix and other cities. Not when goods constitute a declining percentage of economy activity and services an increasing percentage.

And not when the Legislature must have a full range of options when considering new revenue — for education or any other pressing need. They don’t need to be handcuffed.

So, what’s the best choice?

Proposition 126 is built on the notion that politicians are scheming to tax unsuspecting Arizonans and relies on misleading claims to scare them to impose a service-tax ban. And to do so by enshrining the ban in the state Constitution.

The measure is the wrong approach on consumption taxes. We need to broaden the base and spread the burden among taxpayers, not narrow it.

The Realtors Association has spent millions on its misleading television advertising since August. There has not been any organized campaign running counter ads on television against Prop. 126 of which I am aware. It has largely been a grassroots opposition campaign to this preemptive fiscally irresponsible and reckless special interest tax measure.

Arizona Freedom Caucus Members want to gamble with the Health of the State’s School Children, Teachers, and Staff

(UPDATED) With the American Ideal and Soul at Stake, Joe Biden needs a 20, 26, and 34 state strategy to win the country