The chairwoman of the House Ways and Means Committee introduced a bill January 27 that would allow the Legislature to override the secretary of state’s certification of the state’s electoral votes.

HB 2720 (.pdf), sponsored by Rep. Shawnna Bolick, R-Phoenix, says the Legislature “retains its legislative authority regarding the office of presidential elector” and can, by a simple majority vote, at any time before the inauguration of a new president, revoke the certification regardless of whether the Legislature is in regular or special session or has held hearings on the matter.

Bolick’s bill would also make it easier to contest the results of an election by not letting a court dismiss a challenge or enter a summary judgment until after a jury trial, and limiting the circumstances under which laches, a legal doctrine dealing with unreasonable delay in filing a suit, can be used to dismiss election challenges.

You read that right. The legislature reserves the right to disenfranchise voters of the popular vote and to select presidential electors to the undemocratic Electoral College, the only way Republicans can win presidential elections. (Republicans have lost seven of eight presidential elections since 1992 in the popular vote, nevertheless claimed an Electoral College win in two of these elections, giving us two of the worst presidents in modern American history, George W. Bush and Donald Trump, with disastrous results). And the the Sedition Party wants you to voluntarily surrender your popular vote to them at the next election. If enough cult members of the Trump personality cult turn out to vote, it could actually happen.

Remember when @Bolick4AZ proposed a bill that would let the #azleg override voters to pick the president, there was a huge outcry and it didn’t get a hearing?

Well, now there’s a hearing Tuesday on #SCR1006, which would have voters vote to give up their votes for electors. pic.twitter.com/sdY3FI6YDE

The bill is scheduled in the Senate Appropriations Committee at 9:00 a.m. on Tuesday, February 23. 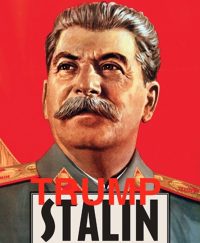 One day last week, state Rep. John Kavanagh decided that while in service to the citizens of Arizona he would channel Russian communist dictator Joseph Stalin.

In the 1920s, Stalin, then editor of Pravda, the official newspaper of the Soviet Union’s communist party, embarked on a strategy of what he called “dezinformatsiya.”

Stalin believed – correctly – that a dictator can tighten his grip on a country by spreading lies and punishing anyone who would dare try to refute them.

During last year’s election there was a lot of disinformation about Arizona’s voting system.

Secretary of State Katie Hobbs did what she could to combat the lies, a job made more difficult when Republicans in the Legislature refused to allow her to use state money to combat those lies. She found private funding.

He wrote in part, “In Arizona, we have some of the strongest election laws in the country, laws that prioritize accountability and clearly lay out procedures for conducting, canvassing, and even contesting the results of an election.”

For which the Arizona Sedition Party censured him at their state party meeting in January.

But the disinformation persisted.

And, uncontested, it could do irreparable damage in the future.

Which, apparently, is exactly what Arizona Republicans want to happen.

On a party-line vote the House Committee on Government and Elections last week they voted to move foreward a bill preventing the Secretary of State from trying to combat the spread of election disinformation. 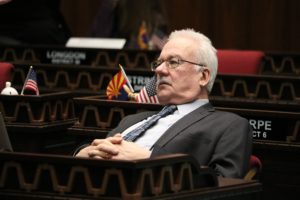 House Bill 2569 would deny election officials from receiving either private or public funds to combat disinformation about elections.

Now you know his sick mind when this blog troll posts comments here, he is engaging in Soviet-style dezinformatsiya, but then you already knew that.

Disinformation is the opposite of truth.

Supporting disinformation is supporting lies. Worse than that, however, is a group of lawmakers not just supporting the spread of lies, but trying to protect those lies with a law.

It’s right out of the Communist Party playbook.

Social media has vastly advanced the ability to spread disinformation. We see evidence of it everyday used against people of all political affiliations. Luckily, we have media entities who try to combat it.

[T]he government needs to pitch in as well, however, to get in on that fight.

Gov. Ducey did so after the last election.

He may need to do so again, with his veto pen.

The Washington Post’s Catherine Rampell warned us back in January 2019 that The GOP has become the Soviet party:

Once upon a time, Ayn Rand-reading, red-baiting Republicans denounced Soviet Russia as an evil superpower intent on destroying the American way of life.

My, how things have changed.

The Grand Old Party has quietly become the pro-Russia party — and not only because the party’s standard-bearer seems peculiarly enamored of Russian President Vladimir Putin. Under Republican leadership, the United States is starting to look an awful lot like the failed Soviet system the party once stood unified against.

Why? Because of the whims of a would-be autocrat who cares more about erecting an expensive monument to his own campaign rhetoric than about the pain and suffering of the little people he claims to champion.

And for now, at least, most of those little people are too frightened of the government’s wrath to fight back overtly. Instead, desperate to keep jobs that might someday offer them a paycheck again, the proletariat protest in more passive ways: by calling in sick in higher numbers.

The would-be autocrat surrounds himself with toadies who spend more time scheming against one another — sometimes to comic effect — than trying to offer their boss sound guidance or thoughtful policy solutions. In his presence, and perhaps especially when the cameras are on, they praise him relentlessly: his brains, his leadership, his “perfect genes.”

Apparent corruption among these kowtowing aides — including improper use of public funds or private favors for fancy travel and other pampering — remains rampant. Unlike in true socialist states, it seems, our leaders haven’t run out of other people’s money.

Meanwhile, federal law enforcement is publicly directed to pursue the would-be autocrat’s political enemies, as well as the family members of those enemies, such as former Trump lawyer Michael Cohen’s father-in-law. Purges of law enforcement or other members of the “deep state” are also demanded, and sometimes acted upon. Such actions, when taken by thugs abroad, were once denounced by Republicans.

State-run media, or something closely approximating it, feeds the public a steady diet of pro-leader propaganda and shields viewers from news that might embarrass the head of state. Independent sources of information or accountability, or those who deviate from the party line, are branded “enemies of the people.”

On the macroeconomic front, leadership may be touting “deregulation” but in many ways is moving toward a more centrally planned economy, which includes the shielding of pet industries from the whims of the market or technological change.

That means propping up coal plants, which fracking has made less competitive. And slapping tariffs across thousands of foreign products, to subsidize struggling domestic competitors or sometimes to protect “national security.” And granting more price supports for farmers.

Just as government has inserted itself into more markets, though, it has abruptly stopped functioning, holding up the processing of those farmer subsidies or tariff exemptions. It’s the old Soviet model in a nutshell: promising much, interfering a lot, failing to deliver.

The Sedition Party is un-American and anti-democratic, disloyal to the Constitution and to American democracy. These insurrectionists and domestic terrorists are a national security threat to the United States. They are Putin’s fifth column of fellow travelers who want to destroy American democracy from within and replace it with GQP authoritarianism.

UPDATE: Jeremy Duda from the Arizona Mirror reports That Rep. Gowan’s ballot measure is being held, but his bill to shortening the time for early mail voting (and that would disenfranchise voters) passed on a party-line vote:

Senate Approps now discussing SCR1006, @DavidGowanAZ's proposed ballot referral that would allow the legislature to overrule the voters and choose presidential electors, regardless of which candidate wins the election.

.@joeledman of @AZadvocacy says lawmakers should vote for this if they support it. Edman notes that the lawmakers will all be on the ballot along with this proposal, some running for other offices, and if they think voters' choices shouldn't matter, voters deserve to know that.

.@DavidGowanAZ says he's holding SCR1006. I'm not sure what the purpose of actually having this debate was.

If this actually went to the ballot, I would imagine it would be quite the gift to Democrats, who would get to campaign against a proposal to effectively take away Arizonans' right to vote for president.

Now they're debating Gowan's SB1593, which shortens the early voting period from 27 to 22 days, and requires that mail-in ballots be postmarked by Thursday before the election, disallows ballots postmarked later, even if they arrive before polls close on election day.

Gowan says this bill is to give county election officials more time to count ballots. The AZ Association of Counties, which represents those officials, is officially opposed to the bill, which means the majority of county recorders are opposed.

SB1593 would also require voters to use a second ballot for their ballot affidavit and put that in the original envelope used to return ballots. @jennmarson from @AZCounties says some counties stopped using this in the past because voters often forgot to use second envelope.