The GOP establishment’s full-blown panic over Donald Trump that I posted about earlier should be a pant-crapper after this. The Hill reports  that “The Donald” Trump leads GOP presidential field in new national poll:

Media coverage of Donald Trump’s controversial immigration remarks have lifted the GOP presidential candidate to the top of the Republican field, according to a new Economist/YouGov poll.

Trump was the preferred GOP nominee for president for 15 percent of respondents — 4 points ahead of former Gov. Jeb Bush (Fla.) and Sen. Rand Paul (Ky.), who were tied for second place.

In addition to being the first choice for the majority of likely voters who participated in the poll, Trump was also the primary second choice for those who preferred another candidate as their nominee.

12 percent of respondents said Trump was second in line for their vote, while only 7 percent picked either Bush or Paul as their safety candidate.

While Trump may be on top this week, registered Republican voters gave him a very weak chance of holding on to that spot in the long run.

The vast majority of respondents — 29 percent — said they believed Jeb Bush would ultimately claim the GOP presidential nomination. Only 7 percent said the same about Trump.

The YouGov methodology has been called into question by some, but the results of this poll are in line with other surveys, including one from the left-leaning Public Policy Polling, which gave Trump a comfortable lead in North Carolina.

Why does this matter? Because the polls over the next few weeks will decide who gets to sit at the big table in the August 6 FAUX News GOP presidential primary debate, and who gets relegated to the kiddie table. 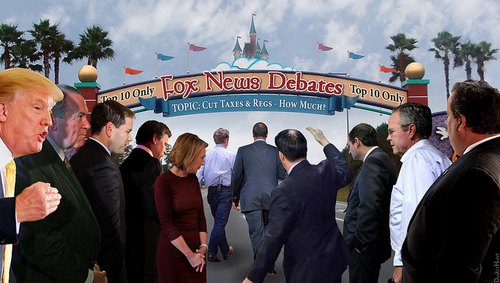 John Kasich may be the last Republican to enter the presidential fray, but his timing could be the best: Exactly two weeks after the splash of his planned announcement on July 21, Fox News Channel will average together the latest polls of the Republican field and determine which 10 of the 16 announced candidates will participate in the first debate in Cleveland.

Making the cut gives a candidate the platform to stand out in a crowded field; not making the cut leaves him or her knocking on the door.

Every candidate — with the exceptions of Jeb Bush, Scott Walker, and Marco Rubio — is in danger of losing his or her place. That leaves the rest of the field hoping their numbers will tick up at just the right time, knowing that the tiniest fluctuation of numbers could be the difference between acceptance and rejection. The difference between being on the main debate stage and being relegated to the B-team is likely be at most 1 or 2 percentage points.

Kasich’s announcement could generate enough publicity to give him at least a brief bump — and a spot in the Aug. 6 debate at the expense of a rival. Political neophytes Ben Carson and Donald Trump seem likely to generate enough publicity on their own to get them over the polling hurdle. If Kasich can bounce into the top 10, that would leave the rest of the field — 10 candidates, almost all of whom have held major elective office — fighting for four spots.

Fox’s decision to limit the debate to the top 10 candidates — in an effort to avoid a cacophony of voices — makes qualifying for the debate a necessity for campaigns struggling to appear viable.

And since national polls will determine which candidates are invited, a few are increasingly desperate to boost their horse-race standing in the days leading up to the debate — in essence, generating a bounce or sugar high in late July that will either vault them into the top 10 or help them stay there.

Now, time is running short. With the release of each GOP primary poll, media outlets like The Washington Post recalculate the average for each of the candidates to project which ones would be in the first debate if it were held today.

But the current average reflects only a baseline. None of the polls that currently compose it will be part of the average that Fox uses to determine which candidates it will invite.

So today’s YouGov poll doesn’t count for “The Donald.” Don’t worry, he will make the cut for the August 6 debate.

In case you missed it, yet another Republican is joining this crowded field.  Former Virginia Governor Jim Gilmore Wants to Run for President, Too! Sure, why not?

I think we may have reached critical mass where virtually every Republican with an ego big enough to think that he or she is qualified to run for president — or to win the consolation prize of hosting a show on FAUX News — will announce they are running for president. The number may grow exponentially.

And what kind of country do we live in when we allow Roger Ailes at FAUX News to decide who gets to debate, and who doesn’t? The media are supposed to be objective observers, not the “deciders” of our politics. (I know, I was laughing when I wrote this!)