The ‘Enemy of The People,’ Mitch McConnell, is the real radical

Home/AZ Politics/The ‘Enemy of The People,’ Mitch McConnell, is the real radical
Previous Next

The ‘Enemy of The People,’ Mitch McConnell, is the real radical

The “Enemy of The people,” Senate Majority Leader Mitch McConnell, says the Senate will vote on ‘Green New Deal’ as he seeks to portray Democrats as radical:

Senate Majority Leader Mitch McConnell (R-Ky.) said Tuesday that he will schedule a vote on the Green New Deal, a sweeping climate and economic plan spearheaded by first-year Rep. Alexandria Ocasio-Cortez (D-N.Y.) as he tries to portray Democrats as radical ahead of the 2020 election.

Cough! Say what now? Mitch McConnell accusing anyone other than himself of being a radical is a sick joke. 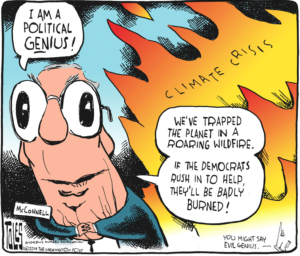 UPDATE: Tom Toles nails it. Being wrong on climate wasn’t enough. Now Mitch McConnell wants to be cute about it too.

When Barak Obama was elected president at the height of the worst financial crisis since the Great Depression and Americans were truly frightened, Mitch McConnell summed up his plan to the National Journal: “The single most important thing we want to achieve is for President Obama to be a one-term president.” McConnell was the architect of partisan “total obstruction” at a time of great national crisis.

By rights, McConnell’s tombstone should say that he presided over the end of the Senate. And I’d add a second line: “He broke America.” No man has done more in recent years to undermine the functioning of U.S. government. His has been the epitome of unprincipled leadership, the triumph of tactics in service of short-term power.

When Justice Antonin Scalia died on Feb. 13, 2016, within the hour of his death, McConnell said the Senate shouldn’t confirm his replacement until after the election. “The American people should have a voice in the selection of their next Supreme Court Justice. Therefore, this vacancy should not be filled until we have a new president,” McConnell said.

This unprecedented judicial blockade was an unconstitutional usurpation of the prerogatives of the president to fill judicial vacancies (and was part of the broader scheme of judicial blockade of Obama’s nominees for all other federal judicial vacancies). The Washington Post reported that McConnell boasted to constituents at an August 2016 political event in his home state of Kentucky, “One of my proudest moments was when I looked at Barack Obama in the eye and I said, ‘Mr. President, you will not fill this Supreme Court vacancy,’” he said to cheers at the annual Fancy Farm Picnic.

When U.S. intelligence agencies confirmed that the Russians were attacking the U.S. election, President Obama asked the four congressional leaders in a bipartisan meeting in the Oval Office to join him in asking the states to work with the administration in addressing the Russian attack. White House Chief of Staff Denis McDonough revealed that Senate Majority Leader Mitch McConnell “watered down” a warning about Russia’s attempts to interfere in the 2016 election and defended the Obama administration’s response to foreign meddling in the campaign. McConnell ‘watered down’ Russia warning in 2016:

The language in a September 2016 letter from congressional leaders to state election officials was drastically softened at McConnell’s urging, McDonough said in an exclusive interview Sunday on NBC’s “Meet The Press.”

The New York Times reported in 2017 that Mitch McConnell had questioned the intelligence on election interference and agreed to a softer version of the letter that spoke of “malefactors” to be aware of but did not specifically mention Russia.

Joe Biden said Tuesday that Senate Majority Leader Mitch McConnell stopped the Obama administration from speaking out about Russian interference in the 2016 campaign by refusing to sign on to a bipartisan statement of condemnation.

That moment, the former Democratic vice president said, made him think “the die had been cast … this was all about the political play.”

Senate Majority Leader Mitch McConnell should explain why he blocked a bipartisan denunciation of Russian interference in our election before voters went to the polls.

Americans deserve to hear why McConnell did not trust them with the evidence that he and 11 other congressional leaders received in a confidential briefing in September.

The Washington Post reports that during that briefing McConnell “made clear to the administration that he would consider any effort by the White House to challenge the Russians publicly an act of partisan politics.”

McConnell also questioned the veracity of the intelligence, according to the Post, based on information from unidentified officials present at the September briefing.

McConnell would not answer reporters’ questions about the Post’s account. He passed up the opportunity to deny that he torpedoed the administration’s request for a bipartisan pre-election statement calling out the Russians.

Now McConnell and other Republicans are saying the integrity of our elections is too important for partisanship. But before the election McConnell appears to have put partisan concerns first.

Since then, Mitch McConnell has blocked every attempt by senators to protect Special Counsel Robert Mueller and his investigation. McConnell says legislation protecting Mueller not necessary. One has to question whether Donald Trump is not the only Russian asset who has infiltrated our government.

As Charles Pierce says, There Is No More Loathsome Creature Walking Our Political Landscape Than Mitch McConnell:

He doesn’t have the essential patriotism god gave a snail. He pledges allegiance to his donors, and they get what they want. He’s selling out his country, and he’s doing it in real-time and out in the open. This is worse than McCarthy or McCarran ever were. Mitch McConnell is the the thief of the nation’s soul.

As historian Christopher Browning has written, “If the US has someone whom historians will look back on as the gravedigger of American democracy, it is Mitch McConnell.” The Suffocation of Democracy.

I have said before that Mitch McConnell belongs in the pantheon of the worst senators in U.S. history. He is demonstrably a villain who believes in authoritarianism, as long as his party and he remains in control. No one has abused the rules of the Senate and American democracy more than has Mitch McConnell. History will not remember him kindly, nor should it. His name should be spoken with disdain as we do for those most despised villains in American history.

So you want to talk about “radical,” Mitch? YOU are the real radical and a traitor to the Constitution and your country.

This authoritarian abuser of power is not done with his plan to destroy American democracy. This dinosaur intends to run for reelection in 2020. It should be the sacred pledge of every patriotic loyal American to defeat this evil GOP bastard and remove this stain from the Senate.

Chuck Schumer is actively recruiting a high-profile fighter pilot to take on Mitch McConnell in 2020 — a calculated act of aggression against a leading Republican foe.

Schumer met with Amy McGrath, a Marine veteran-turned 2018 congressional candidate, at Democratic Party headquarters last month to pitch her on running against McConnell. McGrath listened and didn’t rule it out.

McGrath, the first woman to fly in an F/A-18 in a combat mission for the Marines, first gained national notoriety for a political ad entitled “Told Me,” enumerating the glass ceilings she shattered as a woman in combat. 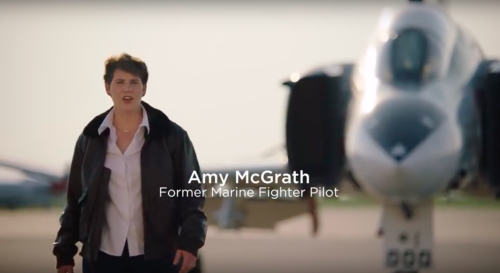 If she does decide to throw her hat in the ring, McGrath will be in for a challenge. Her narrow loss against Rep. Andy Barr in a deeply conservative district revealed her to be a worthy opponent for any Republican, but McConnell, who has served in the Senate since 1985, will have the advantage of an extremely red electorate that presumably likes the power he brings their state. He defeated his 2014 challenger, Kentucky Secretary of State Alison Lundergan Grimes, by 16 points.

McGrath’s one advantage: McConnell is not well-liked, even by his own constituents. In fact, he is the least-popular currently sitting senator.

While it’s not unprecedented for one Senate leader to try to unseat a counterpart — Senator Majority Leader Tom Daschle (D-SD) in 2004 was the most recent; House Speaker Tom Foley (D-WA) famously lost his re-election in 1994— the recruitment mission is an unmistakable act of hostility that’s sure to ratchet up tensions.

Nickolas confirmed the meeting but said that no decision was imminent.

McConnell is marshaling all the dark powers, and dark money, he has accumulated over his career to wage total war against anyone who would dare challenge his authoritarian abuse of power.

McConnell aides have also examined McGrath’s unsuccessful 2018 bid, when GOP Rep. Andy Barr cast her as too liberal for the central Kentucky district. Aides to the Republican leader view the contest as a template for how to defeat her in 2020.

As part of their research into McGrath, which dates back to 2017, McConnell’s team has been scrutinizing her past statements and positions and looking into years of video footage of her.

The GOP leader is also activating the big donor network he’s cultivated over his three-decade-plus Senate career. And plans are being drawn up for the pro-McConnell group Kentuckians for Strong Leadership. On Wednesday, Steven Law, Carl Forti, and Scott Jennings, senior party strategists who’ve previously been involved with the super PAC, will hold an organizational meeting to discuss the path forward.

Aside from the super PAC, McConnell has accumulated over $4 million for his campaign bank account.

“The brilliance of McConnell’s campaigns are that they are comprised of a complex orchestra of political instruments brought together for a symphony of absolute destruction,” said Josh Holmes, a McConnell political adviser. “His opponents may hear a note or two before they decide to run but he saves the full composition to ensure it’s the last thing a candidate hears before they enter the political graveyard.”

Challenging McConnell likely will be the most expensive U.S.Senate race in history, and undoubtedly one of the ugliest campaigns of 2020. But such consummate evil has to be challenged by the righteous. Kentuckians cannot concede another six years to this prince of darkness simply because the task appears daunting and expensive. It is time for a David to rise up and to slay this Goliath and send him to “the political graveyard.”