Home/Courts & Law, National Politics/The entire Republican Party apparatus is gearing up to suppress the vote in 2020
Previous Next

In 1982, the Republican Party agreed to a consent decree after Democrats sued it for activities at polling places that they said were aimed at suppressing the minority vote. The consent decree barred the organization from using voter challengers, poll watchers, i.e., the “National Ballot Security Task Force,” and vote caging plans to target and intimidate voters of color. It specifically precluded the RNC’s poll watchers from overstepping their role as election observers and prohibited them from asking voters for identification, filming or recording voters, and distributing literature about voter fraud penalties.

Every few years or so the RNC moved the court to set aside the consent decree, telling the court essentially “Honest judge, we’ll be good! We don’t do that anymore.” And every few years, the court would look at the evidence and call “bullshit!,” and extend the decree. That is, until 2018, when the RNC finally found a friendly judge to lift the consent decree. The Republican Party Emerges From Decades of Court Supervision.

Actually, Republicans never really stopped suppressing the vote, they just outsourced it to third-party organizations not subject to the consent decree, like True The Vote, to do their dirty work for them. Now the RNC is ready to get its hands dirty again.

Six months before a presidential election in which turnout could matter more than persuasion, the Republican Party, the Trump campaign and conservative activists are mounting an aggressive national effort to shape who gets to vote in November — and whose ballots are counted.

Its premise is that a Republican victory in November is imperiled by widespread voter fraud, a baseless charge embraced by President Trump, but repeatedly debunked by research.Democrats and voting rights advocates say the driving factor is politics, not fraud — especially since Mr. Trump’s narrow win in 2016 underscored the potentially crucial value of depressing turnout by Democrats, particularly minorities.

The Republican program, which has gained steam in recent weeks, envisions recruiting up to 50,000 volunteers in 15 key states to monitor polling places and challenge ballots and voters deemed suspicious. That is part of a $20 million plan that also allots millions to challenge lawsuits by Democrats and voting-rights advocates seeking to loosen state restrictions on balloting. The party and its allies also intend to use advertising, the internet and President Trump’s command of the airwaves to cast Democrats as agents of election theft.

Ahem, voter suppression is election theft. Trump correctly observed recently that if Republicans do not suppress Democratic voters, “You’d never have a Republican elected in this country again.” A party that relies on suppressing the vote has lost all legitimacy and should be rejected by voters.

The efforts are bolstered by a 2018 federal court ruling that for the first time in nearly four decades allows the national Republican Party to mount campaigns against purported voter fraud without court approval. The court ban on Republican Party voter-fraud operations was imposed in 1982, and then modified in 1986 and again in 1990, each time after courts found instances of Republicans intimidating or working to exclude minority voters in the name of preventing fraud. The party was found to have violated it yet again in 2004.

[T]he program escalates a Republican focus on limiting who can vote that became a juggernaut after the Supreme Court dismantled the Voting Rights Act in 2013. But beyond that, it also reflects an enduring tension in American life in which the voting rights of minorities — whether granted in 1870 by the 15th Amendment or nearly a century later by the Voting Rights Act of 1965 — seldom seem free from challenge.

Besides the national party and Mr. Trump’s campaign strategists, conservative advocacy groups are joining lawsuits, recruiting poll monitors and mounting media campaigns of their own. Leading them is a new and well-funded organization, the Honest Elections Project, formed by Leonard Leo, a prolific fund-raiser, [executive vice president of the right-wing Federalist Society] advocate of a conservative judiciary and confidant of President Trump.

Republicans will have an Election Day operations program “that probably no other presidential campaign has had before,” Josh Helton, a Republican consultant, said at a meeting of the Conservative Political Action Committee in March. “It’s going to be all hands on deck.”

In battleground states, that extends even to comparatively quiet places like Fond du Lac County, an eastern Wisconsin outpost of about 100,000 people and 1,200 farms midway between Green Bay and Milwaukee.

“I think the big push is going to be for poll observers” in November’s general election, the Republican Party county chairman, Rohn Bishop, said this month. “No harm in making sure.” Indeed, he said that training sessions for election monitors were already in the works. 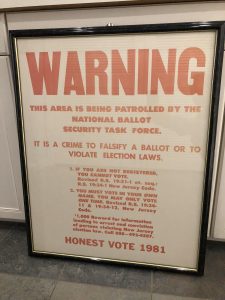 Democrats who have been tracking the effort say the goal is not to limit fraud, but to make the supposed threat of election theft the tentpole of a coordinated campaign by Republicans and their allies to limit the number of Democratic ballots counted in November.

“This is a burn-it-down strategy, a strategy to win at all costs,” said Lauren Groh-Wargo, the senior adviser at Fair Fight, the voting rights group founded by Stacey Abrams, the former Democratic candidate for governor of Georgia. “They see this as central to victory.”

Fair Fight claims that the groups’ combined spending on lawsuits, election monitoring and spreading allegations of cheating will far exceed the $20 million announced to date. That message, blasted out, in particular by Mr. Trump, has stirred concerns that the Republican fraud drumbeat could lay the groundwork for Mr. Trump and his supporters to reject the election results should he lose.

Just as Trump threatened to do in 2016. Trump won’t accept election results if he loses.

The Covid-19 pandemic has raised the stakes further, leading Democrats and voting rights advocates to call for expanded voting by mail and Mr. Trump and some Republicans to claim with little evidence that it would invite fraud.

Some skeptics say the voting wars are partly political Kabuki, acted out to rally supporters in both parties and raise funds for advocacy groups. But in a presidential election where social distancing has muffled campaigning and few voters remain on the fence, turnout has taken on outsized importance. And neither side disputes that November’s vote, as in 2016, could turn on a relative handful of ballots in key states.

Neither the Trump campaign nor the Republican National Committee responded to requests for interviews, although the committee provided a summary of its work and policies. In essence, Republicans say Democratic efforts to relax voting restrictions are partisan moves that demand a firm response, and that Republican countermeasures reflect standard political mobilizing.

Others say the Republican focus on vanishingly rare cases of fraud targets a politically useful phantom.

“It’s utter nonsense. This has been shown over and over,” said Kenneth R. Mayer, an elections expert at the University of Wisconsin-Madison. “The continued insistence that there are material levels of intentional voter fraud is itself a form of fraud.”

Being present at the polls isn’t unusual; in fact, both parties monitor polls. Monitors check whether poll workers follow the rules and can complain to election supervisors or summon party lawyers if differences are not resolved.

They also can challenge voters’ right to cast a ballot — if, for instance, a voter lacks a required ID card. That can force voters to cast provisional ballots that are not counted unless they prove their eligibility.

But Democrats say the Republican focus on monitors and repeated allegations of fraud are part of a coordinated strategy to depress turnout, especially by minorities, by fueling anxieties among voters already suspicious of the authorities.

“They don’t need to keep millions of people away” from the polls, said Ms. Groh-Wargo. “Challenge a couple of voters here, a couple there, and it all aggregates up. They realize they’re going to win or lose this thing at the margins.”

Among other things, Democrats cite Mr. Trump’s repeated demands that law-enforcement officers patrol the polls and the recent creation of voter-fraud task forces by Republicans in four state governments, at least in part at the national party’s urging. [This was the basis for the 1982 consent decree].

They also point to a meeting in February attended by conservative political luminaries and at least one national Republican Party official, sponsored by the Center for National Policy, a group of conservative power brokers. The topic was voter fraud and “ballot security” operations, particularly in inner cities and areas with Native American populations, according to The Intercept, which published excerpts from a recording of the meeting.

One group represented at that meeting, Texas-based True the Vote, is recruiting military veterans to become poll monitors. The group, an offshoot of a Houston Tea Party branch, was scrutinized by local prosecutors after its first poll-monitoring effort in 2012 sparked complaints of voter intimidation.

The group’s founder, Catherine Engelbrecht, told the gathering that Democrats could inundate the polls with phony votes. “The swarming tactics of a radicalized socialist mind-set,” she warned, “is a dangerous thing to behold.” The group did not respond to a request for comment.

“We were really operating with one hand behind our back,” he said.

The party has named three regional directors of Election Day operations, is hiring directors in 15 key states and will beef up the paid staffs that recruit and work with volunteers. Wisconsin, for example, is to receive 100 operatives, compared to 62 in 2016.

One aim, he said, is to expand poll monitoring beyond the usual big-city Democratic strongholds. Mr. Clark, in remarks which were posted online by the Democratic opposition group American Bridge, cited a county where he said Mr. Trump won by 14,000 votes in 2016. “But maybe he should have won by 17,000,” he said. “Their cheating doesn’t just happen when you lose a county.”

In addition to the $20 million raised by the party for legal battles over election rules, conservative advocacy groups have joined the legal war, filing lawsuits and briefs in states such as New Mexico, Minnesota and Nevada. The Honest Elections Project, which surfaced only this spring, already has joined legal battles over voting in six states and has spent $250,000 on advertising opposing voting by mail.

Honest Elections officials did not respond to a request for an interview. But an account in the online publication Axios in January detailed plans by Mr. Leo, its creator, “to funnel tens of millions of dollars into conservative fights” nationwide.

Republicans said the goal of their litigation effort was “to ensure the integrity of the 2020 election” and rebuff Democratic attempts “to sue their way to victory in 2020.” But Mark Elias, a Washington lawyer who represents Democrats in many of the suits that Republicans are contesting, said every Republican court filing has sought to add or keep limits on voting rather than remove them.

“I go to bed sleeping pretty well, thinking I’m fighting for everybody to be able to vote,” he said. “When was the last time a party said it would spend $20 million to make voting harder?”

That would be the last time the RNC met to discuss “ballot security.”