Republicans only care about the federal deficit and national debt when Democrats are in charge of Congress and the White House.

When Republicans are in charge, “Reagan proved that deficits don’t matter,” as Dick Cheney infamously once said.

Remember when Republicans used to say that the national debt was “generational theft” from future generations of taxpayers? Funny how we are not hearing this from Republicans now.

But here is a recent example from Neal Urwitz at the conservative Newsmax, regarding the current GOP tax bill that will add another 1.5 trillion dollars plus to the national debt in order to give tax cuts to corporations and Plutocrats. It’s Not a Tax Cut — It’s Generational Theft:

Hey Baby Boomers — if you could stop stealing from my generation, we’d really appreciate it.

To be clear, I’m referring to President Trump’s tax-cut proposal. His proposal, if enacted, would increase the federal government deficit by trillions of dollars. Sure, the administration claims it’ll be revenue neutral, but there’s no way that’s true.

Sure, some people argue that the increased economic growth from tax cuts will make up the resulting deficit — this theory is known as the Laffer Curve — but even Republicans don’t really believe that anymore. The theory has simply been tried and failed too many times for anyone to reasonably think it’ll work this time.

To state the obvious, if we accumulate massive debt as a nation, someone has to pay the piper. And that is going to be all the generations after the Baby Boomers …

The upshot is my generation will have to pay much higher taxes and will have less money for the things we’ll need in the future — like sophisticated defense, functioning education, homeland security, or fixing our crumbling infrastructure. Oh, and we’ll have to do it with anemic economic growth.

This GOP tax plan, like every GOP tax plan for the past 37 years, is built upon the myth of faith-based supply side “trickle down” economics that has been thoroughly disproved and discredited over time. And yet they persist, because for Republicans it is an article of faith in a false religion, not based upon reality or demonstrably objective facts. “Don’t bother me with facts, I know what I believe!”

The New York Times succinctly makes the case against the GOP tax bill today in its editorial. The Republican Tax on the Future:

Of all the lies Republican lawmakers and President Trump tell about their tax bills, the biggest whopper is that these windfall tax cuts for corporations and the wealthy would generate so much growth that they would pay for themselves.

The House and Senate tax bills probably would provide a tiny lift to the economy for a couple years — enough, supporters no doubt hope, for them to cynically claim success. It’s what comes next that the G.O.P. glosses over: the addition of more than a trillion dollars to the federal debt in just 10 years. Far from paying for themselves, these cuts would leave a bill for several future generations to pay off.

In addition, these bills would create new incentives for businesses to move production offshore and increase the trade deficit, which will benefit foreign economies and hurt the very factory workers Mr. Trump claims to fight for. 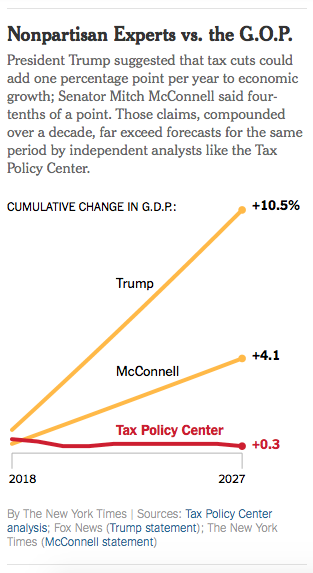 Consider the following: The Urban-Brookings Tax Policy Center recently concluded that the House bill would end up lifting the country’s gross domestic product by just 0.3 percent in 2027. The University of Pennsylvania’s Penn Wharton Budget Model is slightly more optimistic, but not by much: It expects the House bill to increase G.D.P. by 0.4 percent to 0.9 percent cumulatively after 10 years and pegs the Senate bill’s impact at 0.3 percent to 0.8 percent.

These pitiful estimates are a far cry from Mr. Trump’s prediction that economic growth could rise a full percentage point a year, or more than 10 percent over a decade. 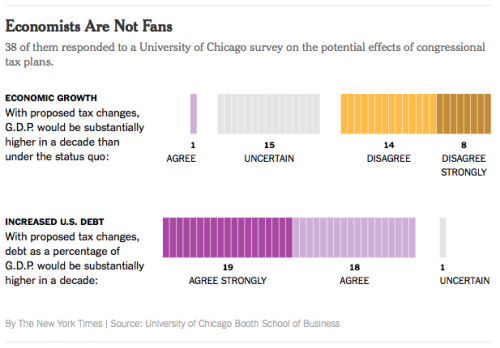 This expert consensus refutes the already thoroughly discredited arguments of supposed deficit hawks, like the House speaker, Paul Ryan, that the bills would energize the economy and make it more competitive globally.

At the heart of these bills is a cut in the corporate tax rate to 20 percent, from 35 percent, that the administration and congressional leaders argue will encourage businesses to invest, hire more people and give workers raises. They base this claim on cherry-picked studies finding that countries with lower corporate tax rates have had higher wage growth, while ignoring evidence that past cuts to the corporate tax rate in the United States and Britain did not lead to economic booms or higher incomes.

In fact, many business executives say that a big tax cut would not propel them to invest and give raises. “From real world experience I can tell you that tax rates literally never came up in any discussion about hiring or pay levels,” David Mendels, a former top executive at Brightcove and Adobe, wrote on LinkedIn recently. Companies invest more when they anticipate greater demand for their goods and services. With the economy close to full employment and corporate profits at record levels, it is hard to see a tax cut doing much to stimulate investment.

At the same time, experts warn that by lowering tax rates for foreign earnings, the bills would encourage businesses to move more of their operations overseas. And the bills exempt some of those foreign profits from United States taxes entirely. Further, companies would be able to claim taxes paid in high-tax countries like Japan as a credit against profits earned in countries like Bermuda with no corporate tax.

Economists also expect the tax bills to lead to bigger trade deficits because the government would be forced to borrow more to pay its bills, driving up interest rates. Those higher rates would prompt foreigners to buy more United States bonds, driving up the value of the dollar. That would make American exports less attractive to other countries and imports cheaper to American consumers. American factories and their workers would become less competitive in the global market, adding new victims to the “rusted-out factories scattered like tombstones across the landscape of our nation” that Mr. Trump deplored in his Inaugural Address.

Republicans appear to be hoping that Americans would be so happy with temporary tax cuts that would kick in next year that they would look for someone other than Mr. Trump or Mr. Ryan to blame when things didn’t work out as promised. But if the vast majority of serious economists are right, these bills would bring nothing but bad news. At least three Republican senators need to vote no to stop that from happening. Surely there are three such lawmakers with the integrity and decency to stop this boondoggle.

Three Republican senators who are not seeking reelection and who have expressed concerns about the GOP tax bill and the national debt: Tennessee’s Bob Corker and Arizona’s John McCain and Jeff Flake. It’s time for them to step up and put “country first” and to reject this destructive ideological tax bill built upon the disproved and discredited faith-based supply side “trickle down” economic theory. The time for their “Profiles in Courage” moment has arrived.

Call Sens. McCain and Flake now and tell them to vote against this terrible GOP tax bill, do it for the future. The vote on this bill is scheduled this week.