The GOP tax cut scam was even worse than you imagined

The GOP tax cut scam was even worse than you imagined

MSNBC’s Chris Hayes did a brief segment on Monday night’s episode of All In with Chris Hayes about a new economics report that got lost in all the noise of the corporate media’s fixation this week with Billionaire plutocrats of the New Gilded Age dismissing progressive proposals to increase taxes on the super-wealthy to address extreme wealth inequality (i.e., Michael Bloomberg and Howard Schultz).

See Oxfam’s new report, “Public Good or Private Wealth,” which shows how the growing gap between rich and poor is undermining the fight against poverty, damaging our economies and fueling public anger across the globe. Last year, billionaires saw their wealth grow by $2.5 billion a day while the poorest saw their wealth fall:

The 2017 US tax bill is super-charging the worldwide tax race to the bottom and exacerbating the trend of governments dramatically cutting tax rates for wealthy individuals and corporations around the world. In the US, 30 people hold as much wealth as the poorest half of the population. Cutting wealth and corporate taxes predominantly benefits men who own 50 percent more wealth than women globally, and control over 86 percent of corporations.

“The recent US tax law is a master class on how to favor massive corporations and the richest citizens,”said Paul O’Brien, Oxfam America’s Vice President for Policy and Campaigns.

HAYES: The trillion dollars in tax cuts for rich people and corporations just turned one year old, and it is unquestionably the single biggest domestic accomplishment of the Trump administration, congressional Republicans and their allies and enablers.

Now at the time it was being debated many people, such as myself, argued it would amount to a vast redistribution of wealth upwards, towards shareholders, CEOs and other rich people. One of the arguments by Trump and his fellow Republicans was that, no, this was not just handing cash to rich corporations so they could give it to their shareholders and make them even richer, instead it was going to unlock a brand new era of capital investment in America.

The argument was that our, quote unquote, “uncompetitive tax policy” was forcing these poor companies to hoard cash rather than invest in America and expand hiring.

HAYES: At the time, many of us pointed out this was preposterous, corporate America was swimming in capital with ultra low interest rates and no obstacles to investing more.

Far likelier, critics argued, was that the extra trillion plus dollars just would be plowed back into what are called share buybacks, which is an effort to boost stock prices and reward shareholders.

Point of fact: Corporate America gives out a record $1 trillion in stock buybacks and 2018’s Record in Stock Buybacks Could Be Shattered in 2019.

Well, it’s been a full year since the tax law went into effect and the results are in, drum roll, please, the $1.5 trillion tax cut had no major impact on business spending, according to a new survey by the National Association for Business Economics. Only 10 percent, I`m not misstating that, 10 percent of business economists said their companies had sped up investments because of the tax law, and a mere 4 percent said they had redirected hiring and investment to the U.S. because of the tax law.

The vast majority of American businesses haven’t boosted hiring or investment as a result of the Republican tax law, according to a survey by the National Association for Business Economics.

Democrats and some nonprofit organizations predicted the tax cuts would not lead to significant job gains and only benefit the wealthy.

Instead companies put much of the money toward stock buybacks rather than investments. Buybacks hit a record $1 trillion in 2018, a nearly 50 percent increase from the year before.

In other words, the critics were right and Trump and the Republicans were wrong, which doesn`t really matter for the wealthy people and corporations who cashed in. And you would be forgiven for taken the cynical that that was the whole point anyway no matter the terrible arguments.

I would just urge you to keep that in mind the next time the same people come around selling their latest round of tax cuts.

The 2017 tax cut has received pretty bad press, and rightly so. Its proponents made big promises about soaring investment and wages, and also assured everyone that it would pay for itself; none of that has happened.

Yet coverage actually hasn’t been negative enough. The story you mostly read runs something like this: The tax cut has caused corporations to bring some money home, but they’ve used it for stock buybacks rather than to raise wages, and the boost to growth has been modest. That doesn’t sound great, but it’s still better than the reality: No money has, in fact, been brought home, and the tax cut has probably reduced national income. Indeed, at least 90 percent of Americans will end up poorer thanks to that cut.

Let me explain each point in turn.

First, when people say that U.S. corporations have “brought money home” they’re referring to dividends overseas subsidiaries have paid to their parent corporations. These did indeed surge briefly in 2018, as the tax law made it advantageous to transfer some assets from the books of those subsidiaries to the home companies; these transactions also showed up as a reduction in the measured stake of the parents in the subsidiaries, i.e., as negative direct investment (Figure 1). 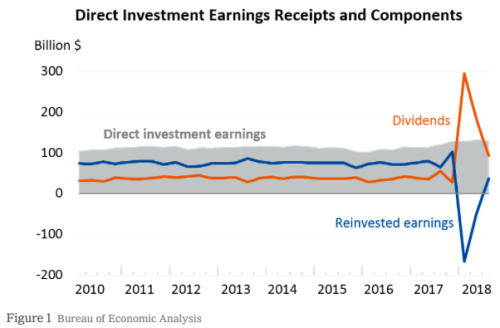 But these transactions are simply rearrangements of companies’ books for tax purposes; they don’t necessarily correspond to anything real. Suppose that Multinational Megacorp USA decides to have its subsidiary, Multinational Mega Ireland, transfer some assets to the home company. This will produce the kind of simultaneous and opposite movement in dividends and direct investment you see in Figure 1. But the company’s overall balance sheet – which always included the assets of MM Ireland – hasn’t changed at all. No real resources have been transferred; MM USA has neither gained nor lost the ability to invest here.

If you want to know whether investable funds are really being transferred to the U.S., you need to look at the overall balance on financial account – or, what should be the same (and is more accurately measured), the inverse of the balance on current account. Figure 2 shows that balance as a share of GDP – and as you can see, basically nothing has happened. 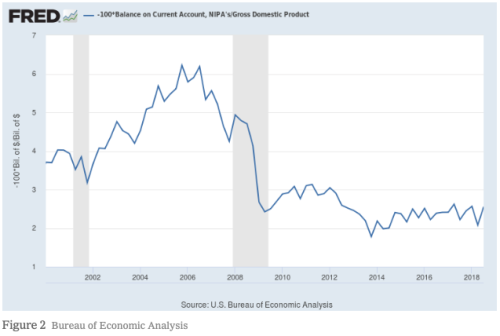 So the tax cut induced some accounting maneuvers, but did nothing to promote capital flows to America.

The tax cut did, however, have one important international effect: We’re now paying more money to foreigners.

Bear in mind that the one clear, overwhelming result of the tax cut is a big break for corporations: Federal tax receipts on corporate income have plunged (Figure 3). 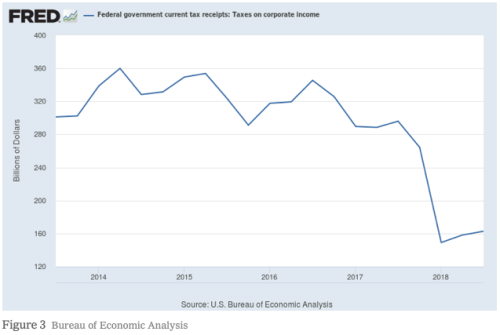 The key point to realize is that in today’s globalized corporate system, a lot of any country’s corporate sector, our own very much included, is actually owned by foreigners, either directly because corporations here are foreign subsidiaries, or indirectly because foreigners own American stocks. Indeed, roughly a third of U.S. corporate profits basically flow to foreign nationals – which means that a third of the tax cut flowed abroad, rather than staying at home. This probably outweighs any positive effect on GDP growth. So the tax cut probably made America poorer, not richer.

And it certainly made most Americans poorer. While 2/3 of the corporate tax cut may have gone to U.S. residents, 84 percent of stocks are held by the wealthiest 10 percent of the population. Everyone else will see hardly any benefit.

Meanwhile, since the tax cut isn’t paying for itself, it will eventually have to be paid for some other way – either by raising other taxes, or by cutting spending on programs people value. The cost of these hikes or cuts will be much less concentrated on the top 10 percent than the benefit of the original tax cut. So it’s a near-certainty that the vast majority of Americans will be worse off thanks to Trump’s only major legislative success.

As I said, even the mainly negative reporting doesn’t convey how bad a deal this whole thing is turning out to be.