The House votes to remove the deadline for ERA ratification

The House votes to remove the deadline for ERA ratification

In late January after Virginia became the 38th state to ratify the Equal Rights Amendment, the attorneys general of the last three states to ratify the ERA filed a lawsuit in federal court arguing that the Trump administration must add the amendment to the U.S. Constitution. State AGs file lawsuit demanding addition of ERA to Constitution:

The latest suit, assigned to U.S. District Judge Rudolph Contreras, contradicts a Justice Department memo earlier this month that said the national archivist, who certifies the ratification of amendments, should not do so for the ERA, citing the 1982 deadline. The archivist has said he will follow the DOJ advice unless a final federal court decision overrides it.

“This could be a historical case for future amendments, not that they come along that often,” said Carl W. Tobias, a constitutional scholar at the University of Richmond Law School. “I can’t imagine it wouldn’t go to the Supreme Court.”

Proponents of the amendment have dismissed the ratification deadline as irrelevant because it is not a constitutional requirement, even though opponents argue the Supreme Court has upheld ratification deadlines in the case of Coleman v. Miller in 1939 and Dillon v. Gloss in 1921.

Note: The Coleman ruling — which modified the high Court’s earlier 1921 dictum in Dillon v. Gloss — held that the question of timeliness of ratification is a political question and non-justiciable one, leaving the issue to the discretion of Congress. Thus the length of time elapsing between proposal and ratification is irrelevant to the validity of the amendment.

Based upon the Court’s reasoning in Coleman, the Archivist of the United States proclaimed the Twenty-seventh Amendment to the United State Constitution as having been ratified when it surpassed the “three fourths of the several states” threshold for becoming a part of the Constitution. Declared ratified on May 7, 1992, it had been submitted to the states for ratification on September 25, 1789, an unprecedented time period of 202 years, 7 months and 12 days.

Pursuant to Coleman, it is none other than the Congress itself — if and when the Congress should later be presented with valid ratifications from the required number of states — which has the discretion to arbitrate the question of whether too much time has elapsed between Congress’ initial proposal of that amendment and the most recent state ratification thereof.

Accordingly, the U.S. House today gave the Equal Rights Amendment a temporary new lease on life Thursday by voting to remove a 1982 deadline for ratification by the states. U.S. House removes ERA ratification deadline, one obstacle to enactment:

The 232-to-183 vote, on a resolution introduced by Rep. Jackie Speier (D-Calif.), pushes the issue to the Senate, where Sens. Ben Cardin (D-Md.) and Lisa Murkowski (R-Alaska) have introduced a similar measure.

Where does our self-proclaimed “woman warrior,” Sen. Martha McSally, stand on ratification of the ERA? Does she stand for women’s equality, or not?

During debate on the House floor, Republicans leaned on antiabortion and constitutional arguments to oppose the ERA, arguing that enshrining protections for women in the Constitution would mean abortion could not be restricted. Democrats focused on the legality of deadlines and the importance of equal rights. 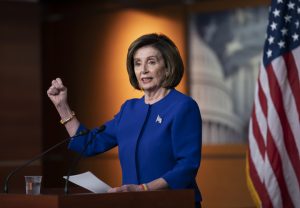 “This has nothing to do with the abortion issue. That is an excuse, not a reason,” said House Speaker Nancy Pelosi (D-Calif.), arguing that women are still paid less than men for similar work, and often are shorted on pensions and maternity leaves.

The Democratic side of the House floor erupted in cheers once enough votes were cast to ensure the resolution would pass. Republican Reps. John Curtis (Utah), Rodney Davis (Ill.), Brian Fitzpatrick (Pa.), Tom Reed (N.Y.) and Jeff Van Drew (N.J.) joined 227 Democrats in voting for it.

[F]ive states that ratified the amendment in the 1970s have since said they wanted to rescind their votes. ERA proponents say those actions are moot, [because the Constitution does not provide for rescission of ratification and] reversals have not been allowed in the past, while opponents say it’s a clear signal of the will of the states.

Attorney General Herring called those actions “purported rescissions,” saying the Constitution does not give governments the power to rescind such votes. During ratification of the 14th Amendment, which guarantees “equal protection of the laws,” Ohio and New Jersey attempted to “pull back” their ratifications but they not were allowed to do so. “I would like to see a new beginning,” Ginsburg said during an event at Georgetown’s law school in Washington. “I’d like it to start over.”

“There’s too much controversy about late comers,” Ginsburg said. “Plus, a number of states have withdrawn their ratification. So if you count a latecomer on the plus side, how can you disregard states that said, ‘We’ve changed our minds’?”

This statement is contrary to law and established precedent. It is disappointing that the Supreme Court’s fiercest advocate of women’s rights would make such an inaccurate statement of law and give her opponents talking points to use. I’m certain that she now regrets saying it.

Of course, Republicans on the House floor Thursday repeatedly quoted Justice Ginsburg’s unfortunate words as they marshalled arguments against the amendment.

It should be noted that Justice Ginsburg went on to say:

Ginsburg has been a champion of the Equal Rights Amendment for decades. And her standard response to the question of how she would improve the Constitution is to point to the ERA.

Ginsburg said Monday she is often asked, “Haven’t you, through the vehicle of the 14th amendment’s equal protection clause” gotten to “the same place where you would be with the ERA?” She said her answer is “not quite.”

Ginsburg noted that every Constitution in the world written since 1950 has the equivalent of an Equal Rights Amendment.

“I would like to show my granddaughters that the equal citizenship stature of men and women is a fundamental human right,” Ginsburg said, echoing comments she has made previously.

She added: “The union will be more perfect when that simple statement — that men and women are persons of equal citizenship stature — is part of our fundamental instrument of government. So even if the argument is it’s largely symbolic, it is a very important symbol.”

The archivist’s decision to follow the DOJ advice, unless a final federal court decision is issued, “underscores the need for the courts to put this to rest,” Herring said.

Attorney General Raoul called the archivist’s role “ministerial and clerical” and said the archivist does not have the discretion to fail to certify the amendment.

“We now have this historic opportunity to ensure that equal rights, regardless of sex, are properly recognized as part of the Constitution,” said Herring, a Democrat who has said he is interested in running for governor. “Virginians have made it clear that it is their will that the ERA be ratified, and I now have the great honor of continuing that fight.”

A lawsuit opposing ratification was filed in Alabama last year by the attorneys general of Alabama, Louisiana and South Dakota. Another lawsuit supports ratification and was filed in Massachusetts by Equal Means Equal, the Yellow Roses and Katherine Weitbrecht.

The Alabama lawsuit seeks to bar the National Archives and Records Administration from certifying the vote, and led to the DOJ letter.

The Massachusetts lawsuit argues that neither Congress nor the executive branch have power to set a deadline for passage of a constitutional amendment and seeks the court to order the national archivist to properly record the ratification and bar the archivist from accepting the five state rescissions and other remedies.

Tobias, the University of Richmond professor, said there are multiple ways the lawsuit could go forward.

“A federal judge may combine the cases,” he mused. “The D.C. Circuit might be more favorably inclined, given their general jurisprudence, but the Supreme Court is fairly conservative — but who knows what conservative means in this case?

The Supreme Court in Coleman has already held that the question of timeliness of ratification is a political question and non-justiciable one, leaving the issue to the discretion of Congress, not the Supreme Court. If Congress acts to accept ratification, it is not the place of the Court to question.

Finally, the rescission issue is simply a red herring: rescission of ratification is not provided for in the Constitution and reversals have not been allowed in the past (established precedent).