Flagstaff’s the Arizona Daily Sun editorialized that the governor and the GOP cannot be trusted to negotiate in good faith when it comes to public school funding. Our View: Ignore Ducey and go for a dedicated school funding tax:

The first days of most strikes are easy.

Last week’s opening days of a statewide teacher walkout over pay and school funding were predictably high on energy and hope.

But as most labor leaders know, a walkout is about much more than just those walking the picket lines. It’s about winning the hearts and minds not only of community opinion leaders but of business owners and neighbors, too. There are bills on which to ask forgiveness, kids to ask the neighbors to care for and the sleepless nights that come with putting your career on the line. If it takes a village to raise a child, it will take an equally strong community to get their teachers through a work stoppage that is about all the right goals, even if the tactics turn out to be wrong.

The goals, of course, are to get every Arizona child the best education possible. That means giving students and teachers the best tools within the resources available. Better pay is thus a means to an end – it attracts the best teachers, stems rapid turnover and stabilizes a key sector of the local workforce. If other states with similar economic capacity have been able to do right by their teachers, why not Arizona?

The answer is more political and cultural than economic. Empty-nester retirees fleeing high-tax states and with little personal stake anymore in public education have encouraged conservative ideologues to pursue trickle-down tax cuts and privatized school choice, despite evidence that neither is working. Net corporate tax revenues on which public schools depend are off dramatically after a decade of tax cuts, and vouchers have served mainly to transfer public dollars to private and religious schools, regardless of educational outcome.

Arizona has some of the most poorly funded public schools in the nation — and over the past several decades, state lawmakers have systematically divested from public education.

The root of these education cuts started decades ago, when state legislators gave tax cuts to the wealthy and corporations during times of economic prosperity. The hope was that it would spur economic growth — but that growth never came. When the economy turned south, states needed to raise more revenue.

But conservative lawmakers refused to raise taxes; they just cut spending. And because education often takes up the largest portion of state budgets, schools were hit especially hard.

And in Arizona, this divestment project has been decades in the making.

The individual tax rates have tumbled downward, and exemptions have increased.

These tax cuts have cost the state about $4 billion in revenue in today’s dollars.

And this tax structure now puts the most financial pressure on the poorest residents. 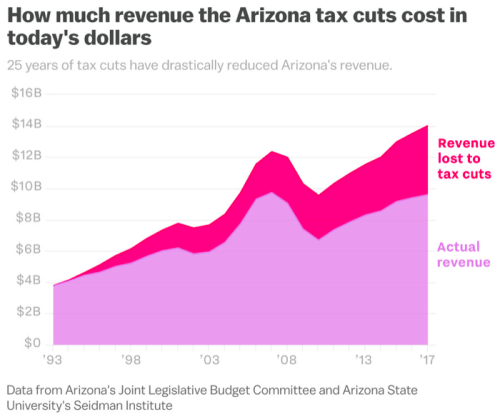 “It’s an ideological aversion to taxes,” Arizona State business professor Tom Rex told me. “It’s a governor and legislature who have not only said they will never raise taxes but cut taxes every year. And we’ve done that for 25 years.”

Because education is a large portion of the state’s budget, these cuts have hurt schools quite a bit.

The teacher walkout, then, is more than a labor issue. It’s a challenge to the starve-the-beast approach to public services practiced by the Republican majority in Phoenix. As such, it’s a question of political philosophy that can ultimately be won only through the ballot box. Education advocates need to align with anti-dark money activists, sustainable energy supporters and others to form a broad-based political movement that leads to a new majority, and tactically a strike isn’t the best way to do that.

On paper, it might seem that keeping the pressure on Gov. Ducey and the Legislature will work – if he agreed to a 20 percent teacher pay raise, why not an extra billion dollars more for support staff, school buildings and overall public education spending? The answer lies in where the money will come from – not from a dedicated tax but out of ongoing revenue that may or may not survive when the state economy enters its next downturn. (At least he’s not trying to tap the schools’ own land trust fund any further.) And the GOP’s record of opposing and reneging on past school funding deals while shifting funds to the unaccountable private sector make it likely that even if they negotiate, it won’t be in good faith.

That’s why a ballot initiative that creates a legislative untouchable stream of tax revenue, whether from sales, income or property, has been our choice from the start. Walking out on students during the crucial last month of the school year is sure to alienate the moderate Republicans in Sun City and the conservative Democrats in the Tucson suburbs, the ones educators will need in any ballot fight over taxes and candidates for the Legislature. A walkout also continues to deflect time and energy from the grassroots organizing and fundraising that has to be come together by November 6.

Our advice top teachers: Forget about negotiating with Ducey and the Legislature or attempting to strong-arm them with a strike. As long as their core mantra is “No new taxes,” they aren’t going to agree to a dedicated funding source, which is the only way students’ long-term interests will be served. Go back to your students and take care of our families. Then dedicate yourself to building a majority for political and social change in November. There are barely six months left and the clock is ticking.

See, The bizarre right-wing campaign to discredit striking Arizona teachers: “Republican politicians in Arizona seem to be on a mission to discredit the strike. They’ve threatened to sue teachers and even strip them of their teaching certificates.” The editors are correct: you can’t negotiate with these ideological extremists. You have to vote them out of office and empower a new majority.

And the citizens initiative that the editors call for has been filed. Ballot measure to tax the rich for K-12 funding launched:

A coalition of teachers, parents and education advocates led by the Center for Economic Progress, a progressive public policy group, launched an effort Friday to raise income taxes on wealthy Arizonans to pay for the state’s public education.

Consultants for the campaign estimate the proposal would generate $690 million annually in new revenue.

The coalition announced the ballot initiative on the second day of Red for Ed rallies at the state Capitol as schools statewide remained closed during mass walkouts.

Center for Economic Progress Director David Lujan and teacher Joshua Buckley, who will chair the Invest in Education Committee, told reporters questions would be answered on Monday.

Cue the ideological extremists from the Arizona Chamber of Commerce and Industry, the benefactors of all those corporate welfare tax cuts over the past 30 years, which came out against the proposal less than an hour after it was filed with the Secretary of State’s Office.

“It is never a good time to raise income taxes on small businesses and their employees; that would just create a drag on the state’s overall economy,” said President and CEO Glenn Hamer in a statement.

Petitions for ballot measures are due on July 5, giving initiative backers just over two months to collect 150,642 valid signatures to get on the ballot.

There were more than 50,000 educators who marched on the capitol on Thursday. If every one of them carried an initiative petition and gathered just 10 signatures among their family and friends in coming weeks, the measure would qualify for the ballot. It is up to the Invest in Education Committee to get those petitions into the hands of educators now.

Linda Valdez of the Arizona Republic also touches upon “the trickle-down lie” that the editors of the Arizona Daily Sun editorialized about. The big lie that led to Arizona’s #RedForEd teacher walkout:

It is the big lie behind Gov. Doug Ducey’s empty promise that economic growth will pay for teacher raises.

The passion that led to a teacher walkout and brought a sea of 50,000 #RedforEd teachers to the Capitol is real and powerful.

Arizona has cut taxes since the ’90s

But so are the facts: For decades, Arizonans have elected those who sell the trickle-down snake oil.

The money isn’t there for raises.

The money isn’t there to fund schools.

Since the 1990s, Arizona has been cutting taxes, which cuts revenue, which leaves schools without adequate funding.

We keep electing those who promise more cuts

This is should not be a surprise. Arizonans have consistently elected politicians who promise – as Ducey did – to cut taxes.

And keep the treasury too empty to fund state needs.

The politicians were honest about their intentions to follow the big lie. But they are being dishonest now if they pretend to be sorry the state is short of money.

You have to understand that shrinking government through starvation is the goal of the conservative philosophy that rules Arizona.

Reduced funding for schools and other needed services is not an unintended consequence. It was the goal.

It has become popular to blame the recession for atrocious state of school funding. To call for pre-recession funding levels – don’t get me wrong, that would be a big improvement.

But the recession was not the underlying problem. It is the philosophy behind the way Arizona has been governed that doomed our schools. That predates the recession.

If we cut taxes, we get more money? Nope

We’ve been governed by a philosophy that insists lower taxes and smaller government is the key to economic growth.

It left us with low-wage state where schools are so underfunded that teachers have taken to the streets. It left us with universities so strapped they had to raise tuition to rates the average Arizonan can’t afford.

Yet Ducey’s “solution” to the current K-12 crisis is to once again rely on the crazy idea that you can get more from less.

He insists economic growth – spurred by his tax cutting – will provide enough for 20 percent teacher raises over three years.

The other lie: Privatizing is better

Even his conservative cohorts in the Legislature couldn’t keep a straight face. The Legislature’s financial analysts doubt it, too.

Yet the majority of our elected officials – the ones with the power to change things – are apologists for trickle down.

The majority in the Legislature has also demonstrated a preference for privatizing education by diverting money from public schools.

That’s because the other part of the trickle-down philosophy is that starving government is good because that leads to more privatization. More corporate power and less “we the people.”

Who can fix this? You

The true believers of this very un-American ideal are the ones we have put in office.

They are the ones we have to fix this mess.

So who elected them? And how do we un-elect them?

Joe Biden and Arizona Democratic Party Criticize Trumps handling of COVID 19 in the Grand Canyon State; Ducey is the one who needs to...