The Mayors of Flagstaff, Phoenix, and Tucson do not Think Reopening the State is a Good Idea

Home/AZ Politics, COVID-19 & Healthcare/The Mayors of Flagstaff, Phoenix, and Tucson do not Think Reopening the State is a Good Idea
Previous Next

The Mayors of Flagstaff, Phoenix, and Tucson do not Think Reopening the State is a Good Idea

UPDATE 5/25: Thank you for reading BlogForArizona. If you are interested in this topic, you may also be interested in reading:
Proof Ducey’s Lying: Arizona’s NOT Ready to Re-Open

Tomorrow (May 15, 2020,) the full Stay at Home Proclamation in Arizona mandated by Governor Doug Ducey to help mitigate the spread of the Coronavirus will expire.

Mr. Ducey, after exhibiting courage by rebuffing the more fringe elements in his party by extending the public health decree at the end of April, appears to have caved to the Trump Zone, Fox Island, and Disinfowar residents in the former party of Lincoln.

While the Governor has claimed that it is safe for Arizona to reopen provided proper safety and social distance measures are adhered to, the Mayors of Flagstaff (Coral Evans,) Phoenix (Kate Gallego,) and Tucson (Regina Romero) do not think Mr. Ducey acted prudently.

Mayor Coral Evans probably spoke for many in the reality community when she made her views known at the May 12, 2020, Flagstaff City Council meeting. She said:

“Governor Ducey’s existing Executive Order 2020-18 (which sunsets 5/15/2020) preempts Arizona mayors from further taking any actions related to COVID-19, and his new order 2020-33 even further and expressly prohibits local government from enacting any restrictions or mandates regarding COVID 19.”

“The State of Arizona is currently operating under his Executive Order and only he determines what restrictions are in place, what are lifted, and the timelines for reopening.”

“Governor Ducey has not mandated that face masks be worn, he has “recommended,” that people “consider wearing them” (meaning people do not have to wear them).”

“He has “recommended,” that people follow social distancing guidelines, but he has not mandated it.”

“He has suggested that people only travel if necessary, but has not mandated an end to non-essential travel.”

“He has suggested that retail establishments limit occupancy, but he has not mandated it.”

“He has suggested that people continue to stay home unless they are going to an “essential business” after declaring just about all businesses essential.”

“The majority of businesses are reopening, regardless of the situation on the Navajo Nation and the increase of cases and deaths in Coconino County.”

“When the City of Wilcox “opened” and the Sheriff refused to issue any citations the Governor did nothing.”

“The Public Health experts in Coconino County say we can expect COVID-19 number to continue to increase in our City and County for the next 2-3 weeks.”

“COVID-19 has turned our economy (locally and nationally) upside down.”

“Most of our small businesses never got the financial assistance that was promised and for some it came too late.”

“Many people have still not yet received the promised $1,200 COVID-19 stimulus that was promised by the Federal government.”

“Many people will have balloon payments for rent in July as the monies promised to assist with rent has been woefully inadequate to address the need we have in our community.”

“The majority of people have still not received unemployment.”

“Here in Flagstaff many people worked 2+ jobs and although they lost 1-2 because they still have one and make more than $240 a week, they are not eligible for Arizona’s traditional unemployment program. I lost two of the three jobs that I had. My daughter was working part-time and was laid off. Neither of us qualify for unemployment.”

“The Arizona Legislature took a break on March 23 and have yet to return. They are still receiving a per diem, they aren’t working at the Capitol, and there is no plan to move forward.”

“Many have said that they do not feel like help is coming and that they will have to risk their lives because they haven’t received the stimulus or unemployment and their landlords are threatening them on a daily basis with eviction and incredible late fees.”

“Government at the federal and state level has failed us. And preempted elected officials at the local level from taking any action.”

“Our economy was decimated based on the concept that we would be saving lives by taking direct, purposeful action.”

“Instead, our leadership chose to not follow CDC guidelines, ignore science, not mandate actions that were needed, not model the behavior that was needed, and deny/delay or provide woefully inadequate assistance to businesses and citizens.”

“The way things stand now it looks as if we will lose just as many if not more people.”

“I hope this answers some of the questions that you might have.”

“This week, Governor Ducey announced that his “Stay Home, Stay Healthy, Stay Connected” Executive Order, will be ending May 15 and new guidance will be put in place. As eager as we all are to return to any sense of normalcy, I believe that the Governor is moving too quickly and that we should proceed methodically and cautiously to prevent a re-emergence that would be even more damaging to our economy in the long-run.”

“Dr. Fauci and our nation’s top health experts testified earlier this week that without widespread testing and a robust contact tracing plan in place, states that are re-opening risk a second wave of the virus. Although some improvements have been made, we lag the rest of the country in both areas. I don’t want our economy to just re-open, I want it to remain open. That will NOT happen if there is a second wave of the virus and we are forced to shut down again.”

“As more businesses open up, I encourage everyone to continue following CDC guidelines by practicing social distancing and wearing a face covering while out in public. My deepest gratitude goes to all the businesses and employers that are taking adequate precautions to protect their employees and patrons. Restaurants in Pima County that are opening up for dine-in services should review the regulations adopted by the Pima County Board of Supervisors yesterday. All businesses that are opening should also review the recommendations and guidelines put out by the Governor’s office……….”

“I’ll talk to you soon Tucson.”

Clearly, the three Mayors of the largest regional cities in the state have misgivings about what has (or has not) happened and what may yet come.

It is important to note that:

These are statistics that show Arizona IS NOT ready to reopen.

It is also imperative to acknowledge that enforcing social distancing, as evidenced by the below picture of the C.A.S.A. restaurant in Tempe on May 12, maybe difficult to monitor on a consistent basis if legal authorities do not seriously enforce these public health safety measures. 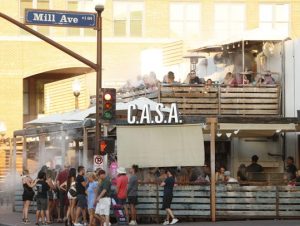 It is clear that the small-government, Laissez-Faire, every state for themselves, deny the science and reality mindset of the current incarnation of the Republican Party has failed to meet the challenges of this public health emergency.

Their inaction has led to an expansion of this pandemic that could have been avoided and a severe contraction of the economy when preventive healthcare actions could have mitigated the depths of the downtown.

People should listen to credible scientific and medical sources and the local and state leaders who have been consistently cautious and right before venturing out and possibly catching a virus that, despite what Donald Trump says, is not going away.

As the Mayors of Flagstaff, Phoenix, and Tucson have said in their statements: Follow the CDC Guidelines.

Even if Donald Trump and, now, Doug Ducey do not.