If you want your news from a Republican perspective, there is Mike Allen, co-founder and executive editor of Axios and former chief political reporter for Politico. Today he has a post with Jonathan Swan who covers the Trump presidency and Republican leaders on Capitol Hill for Axios. The GOP grabs socialism as 2020 lifeline: 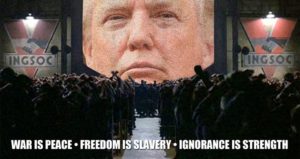 For the first time since the midterms, Republicans find themselves playing offense as they push “socialism vs. freedom” as an opening 2020 message.

This is truly Orwellian, because 2020 is actually about the survival of American democracy vs. authoritarian Trumpism. It is about the restoration and renewal of our democracy, versus the descent into darkness of crypto-fascist authoritarianism.

Why it matters: Giddy House Republicans hope they can ride this message into 2020 — just as Dems seized their winning 2018 midterm message as soon as House Rs voted in 2017 to weaken protections for pre-existing conditions.

Republicans have long demagogued by branding Democrats “socialists.” Now, some Democrats are helping by self-identifying.

This follows a report by Sheryl Stolberg in the New York Times, Republicans Already Are Demonizing Democrats as Socialists and Baby Killers: 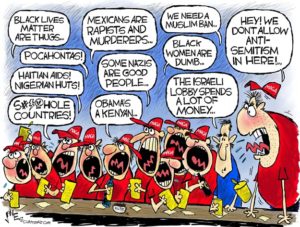 In the 116th Congress, if you’re a Democrat, you’re either a socialist, a baby killer or an anti-Semite.

That, at least, is what Republicans want voters to think, as they seek to demonize Democrats well in advance of the 2020 elections by painting them as left-wing crazies who will destroy the American economy, murder newborn babies and turn a blind eye to bigotry against Jews.

The unusually aggressive assault, which Republican officials and strategists outlined in interviews last week, is meant to strangle the new Democratic majority in its infancy. It was set in motion this month by President Trump, who used his State of the Union address to rail against “new calls to adopt socialism in our country” and mischaracterize legislation backed by Democrats in New York and Virginia as allowing “a baby to be ripped from the mother’s womb moments before birth.”

Then last week, Republicans amped it up, seizing on a Twitter post by a freshman representative, Ilhan Omar of Minnesota, which even some Democrats condemned as anti-Semitic, and ridiculing the “Green New Deal,” an ambitious economic stimulus plan unveiled by Representative Alexandria Ocasio-Cortez, a self-described democratic socialist. Suddenly even Jewish Democrats were abetting anti-Semitism and moderate Democrats in Republican districts were Trotskyites and Stalinists.

“Socialism is the greatest vulnerability by far that the House Democrats have,” Representative Tom Emmer of Minnesota, the chairman of the National Republican Congressional Committee, said in an interview, adding that he had also instructed his team to spotlight “all the extreme wild ideas” that Democrats espouse, “on a daily basis, on an hourly basis if it’s available.”

The spots are the first in what will be a national campaign, according to Zach Hunter, a spokesman for the fund. The stark ads, featuring stern-looking images of Ms. Ocasio-Cortez, offer a preview of how Republicans intend to vilify her in much the same way they have vilified Speaker Nancy Pelosi, caricaturing her as a radical from San Francisco.

Democrats see an insidious effort to use women and minorities, especially women of color, as the new symbols of the radical “other.” And they are calling out Republicans as hypocrites, noting that Mr. Trump and other Republicans trafficked in anti-Semitic tropes and racist dog whistles long before anyone noticed Ms. Omar’s Twitter feed.

“I guess they used that argument to its end, and so they have to find someone new,” Ms. Ocasio-Cortez said in a brief interview. “And who else to use except folks like myself and other freshmen congresswomen? We’re least like them in every way possible, so I think it’s a potent symbol.”

“Democrats have handed Republicans this messaging on a silver platter,” said Andy Surabian, a Republican strategist and former Trump White House official, adding that he believed socialism and Democrats’ stance on abortion were more powerful lines of attack than anti-Semitism. “All these controversies dovetail perfectly with the president’s messaging at the State of the Union.”

Riiight. For political reporters reporting on this GOP strategy, you need to balance your reporting against this stark reality.

The Republican Party, the “Party of Lincoln,” is dead. Its dead carcass was hollowed out by the far-right fringe parasites of xenophobic white nationalists and theocratic Christian nationalists. It is the party of white privilege, and white grievances. This is not your father’s GOP. Stop pretending that it is.

In 2016, the Republican Party abandoned all the principles it once stood for and embraced the personality cult of Donald Trump. They embraced a grifter, a con man, and a criminal who is also a Russian asset of Vladimir Putin. Trump is openly a racist and white nationalist, embracing white privilege, and white grievances. He is a sexist, misogynist, and a bigot. And Republicans are OK with that.

Republicans are also OK with Trump undermining every democratic norm, constitutional principle, and American alliance in pursuit of a crypto-fascist authoritarian regime under the autocratic leadership of Donald Trump, their “Dear Leader,” because of GOP tribalism. The GOP is now the Party of Trump. Republicans are the real radicals and the greatest threat to the survival of American democracy.

As political scientists Thomas Mann and Norman Ornstein warned in their seminal piece in 2012, Let’s just say it: The Republicans are the problem.

We have been studying Washington politics and Congress for more than 40 years, and never have we seen them this dysfunctional. In our past writings, we have criticized both parties when we believed it was warranted. Today, however, we have no choice but to acknowledge that the core of the problem lies with the Republican Party.

The GOP has become an insurgent outlier in American politics. It is ideologically extreme; scornful of compromise; unmoved by conventional understanding of facts, evidence and science; and dismissive of the legitimacy of its political opposition.

When one party moves this far from the mainstream, it makes it nearly impossible for the political system to deal constructively with the country’s challenges.

“Both sides do it” or “There is plenty of blame to go around” are the traditional refuges for an American news media intent on proving its lack of bias, while political scientists prefer generality and neutrality when discussing partisan polarization. Many self-styled bipartisan groups, in their search for common ground, propose solutions that move both sides to the center, a strategy that is simply untenable when one side is so far out of reach.

It is clear that the center of gravity in the Republican Party has shifted sharply to the right. Its once-legendary moderate and center-right legislators in the House and the Senate — think Bob Michel, Mickey Edwards, John Danforth, Chuck Hagel — are virtually extinct.

Mike Lofgren, a veteran Republican congressional staffer, wrote an anguished diatribe in 2011 about why he was ending his career on the Hill after nearly three decades. “The Republican Party is becoming less and less like a traditional political party in a representative democracy and becoming more like an apocalyptic cult, or one of the intensely ideological authoritarian parties of 20th century Europe,” he wrote on the Truthout Web site.

We understand the values of mainstream journalists, including the effort to report both sides of a story. But a balanced treatment of an unbalanced phenomenon distorts reality. If the political dynamics of Washington are unlikely to change anytime soon, at least we should change the way that reality is portrayed to the public.

The media, of course, ignored their prescient warning and focused on the triviality of the Reality TV show of Donald Trump in 2016, normalizing Trump’s abnormal behavior and his outrageous conduct as “entertaining.” The media failed miserably in its role as the “watchdog of democracy.”

The media is again failing the American public in its early coverage of the 2020 presidential campaign, normalizing Trump’s abnormal behavior and his outrageous conduct. The GOP campaign strategy outlined above is what every authoritarian regime has done throughout history: demonize the press, demonize their political opponents, scapegoat “others” (racial or religious minorities) as an enemy, and engage in fear mongering with appeals to identity tribalism. The media has a duty to call this out for what it is and to defend American democracy. Otherwise, you are complicit.