Home/Civil & Human Rights, Education, National Politics/The New York Times is helping the Dark Side of Politics by doing away with its Editorial Cartoons
Previous Next

As people in Arizona know from seeing the editorial cartoons of artists like Steve Benson and David Wayne Fitzsimmons, their caricatures (mostly humorous in tone) have tremendous historical and critical value.

Others have as well.

For example, the below cartoon from David Low at the outbreak of World War Two in Europe shows Hitler and Stalin jovially introducing themselves over the body of a dead Poland. 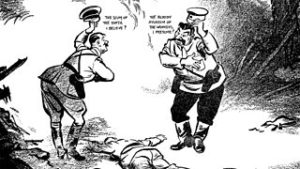 Another example is Herblock from the Washington Post making commentary on the issue of Civil Rights during the 1960s by publishing editorial cartoons like the one below. 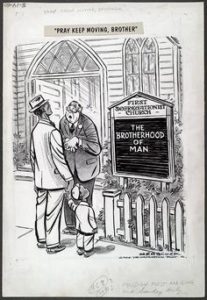 Then and now, editorial cartoons have had value in communicating the news, offering social commentary, and providing valuable primary source material for students and historians to examine and analyze the historical period of that era or consider the mindset of the people (or some of them) at that time.

For those reasons, the New York Times has erred by doing away with its editorial cartoon division.

The Times reasoning, partially in response to its erroneous publication of an obvious Anti-Semitic cartoon (there are more tasteful ways to caricature neo-fascists Individual One and soon to be indicted, Netanyahu) is short-sighted and threatens freedom of expression as it gives potential license for the lunatic fringe on both sides of the political spectrum to attack in a mob frenzy against any depictions they find objectionable.

Noted editorial cartoonists like Nick Anderson and Rob Rogers have lost their positions in part because of the views they expressed in their art. In Arizona, Pulitzer Prize winner Steve Benson was one of only two people let go by the Arizona Republic in a “cost-cutting” move. He now showcases his talents at the Arizona Mirror.

It would have been better for the Times to have adopted a screening process for its cartoon submittals to “weed out” the one in a million that crossed the line of decency.

As New York Times cartoonist Patrick Chappatte wrote following the Times decision:” Political cartoons were born with democracy. And they are challenged when freedom is.”

For a Democracy to flourish, the country needs an informed citizenry. One of the ways citizens are informed is its exposure to the free (and preferably unbiased) press. That includes informed commentary either through editorial columns or cartoons where readers can read the views from all sides of the political arena.

At a time when the KKK endorsed candidate in the White House decries the media (other than Fox or Infowars) as fake news and calls journalists “the enemy of the people” and when smaller news outlets are being devoured by larger ones or vanishing into oblivion, the need for as much information and insights, in worded and visual form, is more paramount than ever.

If people do not act to promote a free press, then we are in danger of having the emerging new global Authoritarian- Fascism, as activist DaShanne Stokes wrote, “… thrive in obscurity and darkness”

The New York Times should reexamine its decision and reinstitute its editorial cartoons.