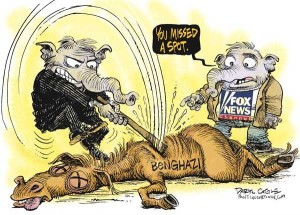 Earlier this week, we learned that the Benghazi!!! witch hunt is a bust.

Well, never let the facts get in the way of the fact-free world of FAUX News and the conservative media entertainment complex. “It’s our job to make shit up and create conspiracy theories!”

On the same day that the House Select Committee on Benghazi!!! released its report, Donald Trump’s lawyer accused Clinton of having “murdered an ambassador” in a tweet, the Trump weapon of choice. Presumably he meant Ambassador Chris Stevens, given the timing of his tweet.

Sure, why not. In May, the candidate himself tried to revive the “Vince Foster was murdered” by the Clintons conspiracy theory that has been a staple of the right-wing noise machine ever since Foster’s death. Donald Trump’s Irresponsible Claims About Vince Foster.

The committee report and the unhinged hyperbole from the conservative media entertainment complex elicited a response from Chris Stevens’s Family: Don’t Blame Hillary Clinton for Benghazi:

Dr. Anne Stevens, the sister of Ambassador Chris Stevens, has served as a family spokesperson since his death.

Whom do you fault for the lack of security that resulted in the death of your brother, in Benghazi?

It is clear, in hindsight, that the facility was not sufficiently protected by the State Department and the Defense Department. But what was the underlying cause? Perhaps if Congress had provided a budget to increase security for all missions around the world, then some of the requests for more security in Libya would have been granted. Certainly the State Department is underbudgeted.

I do not blame Hillary Clinton or Leon Panetta. They were balancing security efforts at embassies and missions around the world. And their staffs were doing their best to provide what they could with the resources they had. The Benghazi Mission was understaffed. We know that now. But, again, Chris knew that. It wasn’t a secret to him. He decided to take the risk to go there. It is not something they did to him. It is something he took on himself.

After years of congressional investigations, do you feel that your brother’s death has been politicized in Washington?

Yes! Definitely politicized. Every report I read that mentions him specifically has a political bent, an accusatory bent. One point that seems to be brought up again and again is the accusation that the attack was a response to the video. I could understand why that conclusion would be made, because it was right after the attack on the U.S. Embassy in Egypt. But, frankly, it doesn’t matter that that was the thinking, that night, about why the attack occurred. It’s irrelevant to bring that up again and again. It is done purely for political reasons.

It would be much more useful for Congress to focus on providing resources for security for all State Department facilities around the world—for increasing personnel, language capabilities, for increasing staff to build relationships, particularly in North Africa and the Middle East. I would love to hear they are drastically increasing the budget.

Yes, Congress appropriating adequate funding for embassies and state department personnel around the world. Congress, the one entity that the House Select Committee on Benghazi!!! did not blame. How convenient.

And now we have the spectacle of the merchants of death with the blood of innocents on their hands, the  National Rifle Association, taking the lead on Swiftboating Hillary Clinton on Benghazi!!! in a new ad. Steve Benen reports, NRA gets everything wrong in new attack ad:

[T]he presumptive Republican nominee is getting some help from a controversial ally: the NRA Political Victory Fund, the National Rifle Association’s political arm, is investing $2 million in a new attack ad blaming the 2012 attack in Benghazi on Hillary Clinton.

The spot features Mark Geist, a Marine veteran who survived the terrorist attack, apparently walking through a national cemetery. It will air in Colorado, Florida, Ohio, Nevada, Pennsylvania, and Virginia.

So, what’s wrong with the ad? Just about everything. First, the New York Daily News reports on the problem of using a national cemetery as a prop in a campaign attack ad.

Federal government officials dismissed the ad, stating that the NRA never requested to film on the solemn, hallowed ground — and would have been rejected if it had.

“Partisan activities are prohibited on national cemetery grounds as they are not compatible with preserving the dignity and tranquility of the national cemeteries as national shrines,” the Department of Veterans Affairs National Cemetery Administration, which maintains 134 national cemeteries, told The News in a statement.

Second, while the ad suggests Clinton was responsible for the attack in Benghazi, the star of the commercial is actually on record saying largely the opposite.

Third, just this week, the House Republicans’ own Benghazi report found no evidence — despite two years of investigating — that blames Clinton for the terrorism.

And finally, note that the ad features hundreds of cemetery tombstones, when the actual U.S. death toll in Benghazi was four people.

I don’t expect much from NRA attack ads, but this is low, even for the notorious gun group.

Oh Steve, this is everyday fare in the conservative media entertainment complex. GOP “big lie” propaganda thrives in an environment of ignorance, fear and hatred. This is just the beginning of the “Swift Boat” lies against Hillary Clinton.

The GOP propaganda machine has no choice but to engage in the politics of personal destruction because they have a deeply flawed presumptive nominee whom most Republicans agree is unfit to serve as president of the United States. And yet the GOP propaganda machine, the conservative media entertainment complex, is going to do everything they can to help elect this unfit buffoon president.