I posited the question the other day, “One has to wonder if this is not the actual goal of authoritarian Republicans — to destroy the rule of law, our constitutional government, and our long-cherished democratic institutions, norms and values — and replace it with a lawless authoritarian kleptocracy, like Russia.”

We now know that the answer to this question is a definitive “yes.” Donald Trump is using his pal Vladimir Putin’s playbook, “The how to guide to becoming an autocratic despot.”

President Trump took extraordinary steps on Thursday to give his incredibly corrupt Attorney General William P. Barr sweeping new authorities to conduct a review into how the 2016 Trump campaign’s ties to Russia were investigated, significantly escalating the administration’s efforts to “investigate the investigators” and potentially prosecute those who investigated his campaign’s multiple and repeated contacts with Russian operatives in the 2016 campaign. Trump Gives Attorney General Sweeping Power in Review of 2016 Campaign Inquiry:

In a directive, Mr. Trump ordered the C.I.A. and the country’s 15 other intelligence agencies to cooperate with the review and granted Mr. Barr the authority to unilaterally declassify their documents. The move — which occurred just hours after the president again declared that those who led the investigation committed treason — gave Mr. Barr immense leverage over the intelligence community and enormous power over what the public learns about the roots of the Russia investigation.

Mr. Barr, who has used the word “spying” to describe how the Trump campaign was investigated, has been deeply involved in the department’s review of how intelligence was collected on the campaign. Mr. Barr has told Congress that he personally authorized the review. While he has asked John H. Durham, the United States attorney in Connecticut, to spearhead it, a Justice Department official said that Mr. Barr has personally met with the heads of the intelligence agencies to discuss the review and that the project was a top priority after the release last month of the special counsel’s report.

One official, who spoke on the condition of anonymity to discuss classified matters, said previously that Mr. Barr wanted to know more about what foreign assets the C.I.A. had in Russia in 2016 and what those informants were telling the agency about how President Vladimir V. Putin of Russia sought to meddle in the 2016 election. 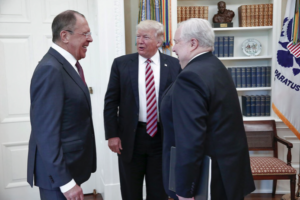 Just to be clear: Donald Trump has adopted a policy of “total obstruction” of congressional inquiries into any and all investigations, no witnesses, no documents, no nothing. At the same time, he is directing the intelligence agencies to cooperate with his new Roy Cohn, his incredibly corrupt Attorney General who is pursuing the “deep state” conspiracy theory of a “coup” propagated by Trump himself and his Minister of Propaganda at Fox News aka Trump TV, Sean Hannity, and the radical authoritarians of the GOP House Freedom (sic) Caucus led my Mark Meadows and “Gym” Jordan. 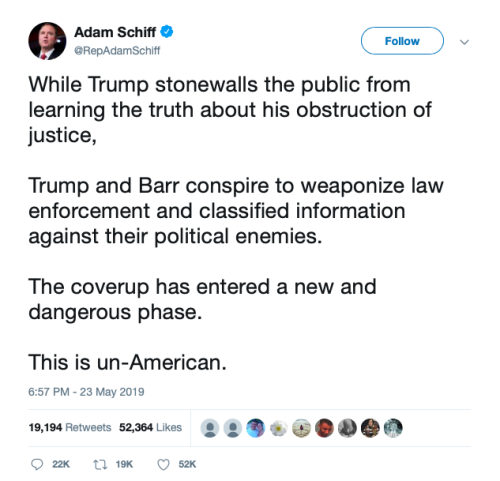 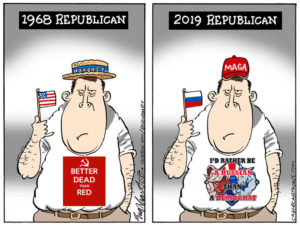 If Vladimir Putin wanted to take down the American intelligence agencies and their network in Russia, he could not have conceived of a better way to do it than to imbed his own Russian asset in the White House.

There was a “coup” alright, just not the false narrative one that Donald Trump is peddling. This is exactly what Putin would have wanted. And Donald Trump, William Barr and Republicans in Congress are all enabling it. WTF?

I have to agree with Josh Marshall on this, The Other Shoe Dropping:

For everyone who’s been worried about Attorney General Bill Barr’s lawless reign at the Department of Justice last night was the big moment. As you’ve likely already seen President Trump gave Barr blanket authority to access and declassify any and all classified information from the country’s dozen and a half intelligence agencies in his quest to “investigate the investigators” of the Russia scandal.There’s hardly any way to overstate just how big a deal this is or how dangerous it is in the hands of a corrupt official like Bill Barr.

First, this power is totally unprecedented. The President is the ultimate arbiter of what is and is not classified. There are processes in place and guidance he’s supposed to listen to to exercise that authority. But he doesn’t have to. Barr is free to disregard those rules, overrule the heads of the intelligence agencies in question in question or not even tell them what he’s doing.

There’s nothing sacrosanct about the judgment of the heads of these different agencies. The issue is that Barr has an agenda to help the President and punish his perceived enemies. Giving someone like that this kind of power is a recipe for disaster.

Barr has a proven record of selectively disclosing information with the aim of deceiving the public. That was what the Barr Letter was all about and he’s demonstrated that proclivity for deception ever since he took over the DOJ. This is the Barr Letter on steroids. Trump has given him the ability to selectively declassify information to create a narrative of events which supports the President. It goes without saying that if you can choose only the facts you want and sheer them of their context you can create almost any story you want. And that’s what Barr is about to do.

If anyone wants to declassify more information that clarifies the meaning of whatever Barr chose to declassify they won’t be able to. Because that’s up to the President or Bill Barr.

There’s a secondary part of this which doesn’t touch directly on propaganda creation. But it may be more important. This level of power basically gives Barr a whip hand over the entire Intelligence Community. And he seems to want to get his hands on the Russia desks especially. As the Times notes, “Mr. Barr wanted to know more about what foreign assets the C.I.A. had in Russia in 2016 and what those informants were telling the agency about how President Vladimir V. Putin of Russia sought to meddle in the 2016 election.” These are likely among the most closely held secrets the US government has. They will all but certainly be communicated directly to the President…

Who will then share this information with his pal Putin. And then those American assets will start “disappearing.”

Then there is Trump’s highly offensive attempt to redefine the meaning of “treason” to mean anyone in the chain of intelligence who investigated his campaign’s multiple and repeated contacts with Russian operatives in the 2016 campaign, i.e., the FBI, the intelligence agencies, the FISA courts, and up to and including President Obama. And Trump relishes the penalty for treason: death. Trump, not understanding treason, names people he thinks committed the capital crime:

During an impromptu press conference at the White House on Thursday, President Trump was asked by a reporter to be a bit more specific with one of the pejorative claims he’s been making in recent weeks.

“You’ve accused your adversaries of treason,” Alexander continued. “Who specifically are you accusing of treason?”

“Well,” Trump replied, “I think a number of people. And I think what you look is that they have unsuccessfully tried to take down the wrong person.”

Comey and McCabe are two of Trump’s favorite long-standing targets. Both ended up being fired from the FBI during his administration, the former in May 2017 — inadvertently kicking off the investigation by special counsel Robert S. Mueller III — and the latter last year shortly before he was eligible to retire with full benefits. Trump has long blamed McCabe in particular for his role in the investigations into members of Trump’s campaign team, investigations which began on Comey’s watch.

It’s important to pick out that more vague descriptor used by Trump though: “People probably higher than that.”

Who’s higher than the director of the FBI? Well, the attorney general who, in 2016 at the time of the start of the Russia probe was Loretta Lynch. And above that, the president. Trump has obliquely suggested in the past that former president Barack Obama had a direct role in calling for an investigation into Trump’s team, an implication for which he’s never offered any evidence. (In fact, his entire construct that his team was “spied on” is at best iffy.)

But notice what’s happened here: Trump’s gone from nodding at the idea that treason demands execution to hinting darkly that senior officials in his predecessor’s administration might have committed the crime.

It’s an absolutely ridiculous assertion, mind you. For all of Trump’s overheated rhetoric, none is as easily dismissed as this claim of “treason.” Why? Because, as an expert with whom we spoke in March explained, the constitutional definition of treason to which Alexander referred is very specific in its scope.

“You can commit treason in one of two ways,” Carlton F.W. Larson, professor of law at the University of California at Davis and author of the upcoming book “The Trials of Allegiance: Treason, Juries and the American Revolution,” said when we spoke by phone. “One is you can levy war against the United States, which is essentially raising an internal rebellion to overthrow the government. … The other would be adhering to the enemy, giving them aid and comfort. And ‘enemy’ is defined very precisely as foreign nations or groups with whom we are in a state of  declared war.”

So unless Comey and McCabe raised an army to take on the U.S. military or provided direct aid to countries who are officially at war with the U.S. — countries to be named later — they didn’t commit treason. By definition.

In fact, Larson said that Trump’s use of the term was precisely what the Founding Fathers were hoping to avoid.

“It was very clear,” he said: “One of the reasons to limit the offense the way it was done in Article III was to prevent it from being a political tool where people in power use it to suppress their political enemies.”

So there was no treason, by definition. Certainly a reassurance to the former FBI leaders.

If Trump and his Republicans allies are successful in destroying our constitutional democracy and replacing it with a lawless authoritarian kleptocracy, like Russia, Trump will possess the autocratic power to redefine “treason” to mean whatever he wants it to mean, and use it to imprison and execute his political opponents and his perceived enemies — just as Vladimir Putin does in Russia. Trump is telegraphing that this is what he really wants to do. We should believe him because he has been so “transparent” about it.

If we do not resist and defend the Constitution and American democracy, we will surely lose it. And then the dark night of Trumpism, the new American fascism will descend upon the land.