Steve Benen has a decent summary of the prosecution’s case over Wednesday and Thursday. You really must view the hours of video evidence presented with narration and timeline to get the full impact of this highly effective presentation of the evidence. The Impeachment Managers drew a straight line from Trump’s words and actions to the words and action of his violent Trump mob who sieged the Capitol. Even under the tougher standard of proof in a criminal trial for proving incitement of insurrection, an impartial jury of citizens called to jury duty doing their duty would be compelled to convict Donald Trump.

The one witness I would have called is Vice President Mike Pence, but he would have objected to a witness subpoena, taking up valuable time in court, only to likely have continued to be an ass-kissing Trump sycophant, Impeachment trial shows him under attack, but Pence remains loyal to Trump, even as the evidence showed how Trump incited his violent MAGA mob to hunt him down to “Hang Mike Pence!” They even erected a gallows for him.

Unfortunately, we are dealing with Republican senators with no sense of shame or commitment to their oath of office and doing their their duty as jurors. Their only motivation is getting primaried in their next election by some Trump/Qanon cult member. Doing justice and defending the Constitution, and defending American democracy against sedition and insurrection barely registers with them.

As House Impeachment Manager Rep. Jaime Raskin said to the jury on the opening day of the trial, “If that’s not an impeachable offense, then there is no such thing.” Which is exactly what Republicans are hoping to achieve, nullify the impeachment provisions of the U.S. Constitution only as applied to Republicans. You can bet Republicans will not hesitate to bring an impeachment against a Democratic president. In fact, the QAnon Queen Marjorie Taylor Greene has already filed retaliatory, and baseless Articles of Impeachment Against Biden. Kick this crazy chick’s sorry ass out of Congress.

The House impeachment managers wrapped up their presentation yesterday, and for those clinging to hope that perhaps Donald Trump deserved to be acquitted on the merits, it was a brutal two-day exercise. The New Republic‘s Matt Ford summarized matters nicely:

The House managers, for their part, did not merely connect the dots between pieces of evidence or bits of testimony. They just played video clips of what had happened in a stark, simple chronological order. All they needed was the footage of the year Trump spent crafting his “Big Lie” about election fraud, as well as footage of his followers’ unambiguous — and undisputed — belief that he wanted them to commit violence against Congress. They had both. The House managers did not present a theory of Trump’s guilt. They merely showed it.

I’m mindful, of course, of the fact that most Senate Republicans entered the proceedings with no intention of honoring their responsibilities. For these GOP “jurors,” the quality of the arguments, and the merits of the case, were irrelevant long before the trial got underway. Trump has an “R” after his name to denote his party affiliation, and as far as these senators are concerned, little else needs to be said.

But this does not change the fact that the Democratic impeachment managers proved their case beyond a reasonable doubt. The arguments floated in defense of the former president lay in ruins.

Maybe it’s unconstitutional to convict a former official? The claim has been discredited and rejected by a bipartisan majority. [56-44, that claim “has been put to bed.”]

Maybe Trump had a First Amendment right to incite an insurrectionist riot? This may be a favorite of Trump’s defense lawyers, but it’s been exposed as nonsense. Impeachment managers invested a fair amount of time yesterday explicitly explaining the irrelevance of the First Amendment in this case.

Maybe an impeachment conviction requires a statutory crime? The managers shredded that, too.

Maybe Trump didn’t know his followers would launch an attack on the Capitol? Of course he did. The impeachment managers documented the lengthy pattern in which Trump pleaded with his followers to come to D.C. on the day in which lawmakers would certify the results, in order to “stop the steal.” As the trial documented, he cultivated support from extremists for months for this express purpose, feeding them lies and stoking their misguided rage.

Maybe the Capitol attackers weren’t summoned, but merely came to D.C. on their own? After their arrests, one rioter after another explicitly declared that they were directed by their president. They were there at Trump’s request and instruction. During their attack, they repeatedly said they were following Trump’s instructions. 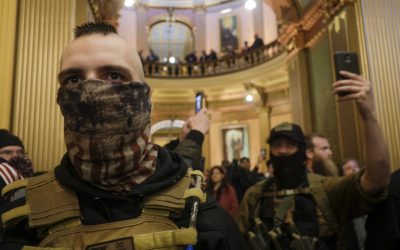 Maybe the riot was some kind of aberration? If only that were true. “These tactics were road tested,” Rep. Jamie Raskin (D-Md.) explained, after pointing to extensive evidence. [Trump’s tweets to “Liberate Michigan!” and other states from COVID Lockdowns, and the siege of the Michigan Capitol by armed militias. It was a road test of Trump’s “call and response” from his MAGA cult members. Some of these militia members plotted to kidnap the Governor of Michigan to try her and to execute her, exactly like the insurrectionists planned to do to Vice President Mike Pence.] “January 6 was a culmination of the president’s actions, not an aberration from them. The insurrection was the most violent and dangerous episode so far in Donald Trump’s continuing pattern and practice of inciting violence.”

Maybe Trump’s “fight” rhetoric was routine? It’s a ludicrous defense based on the idea that context has no meaning.

The former president’s lawyers have been allotted 16 hours to present their defense to the Senate, and according to many accounts, they may end up using as few as three hours. That would at least make a degree of sense: there is no credible defense for the indefensible.

As a Washington Post editorial put it, “Senators will bring disgrace upon their chamber if they fail to hold the former president accountable. No reasonable listener this week could fail to find him culpable for the Capitol assault.” E.J. Dionne added that the Democratic impeachment managers took great pains to “close off the escape hatches and back doors for Senate Republicans.”

In all likelihood, these GOP “jurors” will express nothing but indifference to Trump’s obvious guilt. The shame will follow them indefinitely.

But in the meantime, I hope they’ll remember a question Rep. Joe Neguse (D-Colo.) posed to senators yesterday: “We humbly, humbly ask you to convict President Trump for the crime for which he is overwhelmingly guilty of. Because if you don’t, if we pretend this didn’t happen or worse if we let it go unanswered, who’s to say it won’t happen again?”