When I saw this report in the Phoenix New Times the other day, “Jade Helm 15” Operation in Arizona by U.S. Army Worries Wackos, I really didn’t give it a second thought.

It was just another case of crAZy Tea-Publicans who waste their lives on the certifiably insane Alex Jones and his far-right conspiracy theories at Infowars. These are the kind of people who belong in a straight-jacket in a padded cell for their own safety. 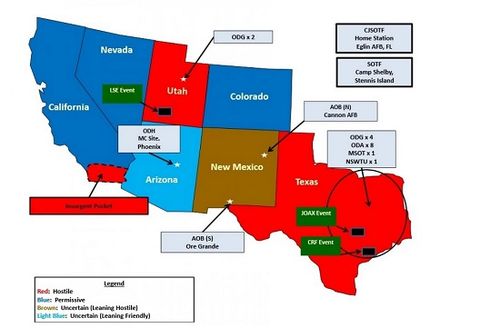 Sadly, I now have to give this crAZiness a second thought. Steve Benen reports on the The perils of political paranoia in Texas:

In too many parts of the country, what’s true is far less important than what far-right paranoia tells people might be true. Take the latest out of Texas, for example, where the Dallas Morning News published this strange report yesterday.

Gov. Greg Abbott ordered the Texas Guard to monitor federal military exercises in Texas after some citizens have lit up the Internet saying the maneuvers are actually the prelude to martial law. […]

Radio host and conspiracy theorist Alex Jones has been sending out warnings for weeks regarding the exercise, saying it is the U.S. military positioning itself to take over the states and declare martial law. Abbott apparently has heard the concern and ordered the Guard to monitor the training and U.S. military personnel.

At issue is a military exercise called “Jade Helm 15,” which will reportedly include about 1,200 special operations personnel, including Green Berets and Navy SEALs, conducting training drills throughout the Southwest, from Texas to California.

According to right-wing conspiracy theorists, however, the exercise is a secret scheme to impose martial law. According to the Houston Chronicle, the unhinged activists believe “Walmart is in on it,” and “secret underground tunnels” are somehow involved.

Indeed, every time officials try to explain to the public this is only a training exercise, the right-wing fringe perceives a smokescreen.

On Monday, command spokesman Lt. Col. Mark Lastoria attended a Bastrop County Commissioners Court meeting to answer community questions and was met with hostile fire. Lastoria, in response to some of the questions from the 150 who attended, sought to dispel fears that foreign fighters from the Islamic State were being brought in or that Texans’ guns would be confiscated, according to a report in the Austin American-Statesman. […]

“You may have issues with the administration. So be it. But this institution right here has been with you for over 200 years,” he was quoted as saying. “I’ve worn this uniform across five different administrations for 27 years.”

But the conspiracy theorists remain unconvinced, choosing to believe fringe online personalities instead.

Perhaps it shouldn’t come as too big a surprise, then, that Texas’ governor directed state forces to “monitor” the operation, in part to “address concerns of Texas citizens.”

What’s especially interesting to me is the frequency with which the line blurs between elected officials’ concerns and fringe crackpots’ conspiracy theories. Indeed, it was just a couple of months ago that Texas state lawmakers held a hearing about the non-existent threat of the United Nations taking control of the Alamo.

Soon after, legislation was introduced in Tennessee to prohibit “no-go zones” in the Volunteer State, not because they’re real, but because “some people” said they’re afraid of them.

Alex Jones is hardly the only right-wing nut-job conspiracy theorist out there. Ron Paul has made a living off of shaking down the rubes of their money for years. Now that his son, Rand Paul, the Aqua Buddha grifter is running for president, he wants a taste of this action as well.

Talking Points Memo reports, Rand: I’ll Look Into Whether The Military Is Planning A Texas Takeover:

Sen. Rand Paul (R-KY) said in a recent interview that he’d “look at” a planned U.S. military training exercise that conspiracy theorists believe may be a cover for the implementation of martial law.

Des Moines, Iowa radio host Jan Mickelson asked the Republican presidential candidate in an April 21 interview whether he was up to speed on the training exercise dubbed “Jade Helm” that’s scheduled to take place in several southwestern states.

“You know I’ve gotten a few questions about it on the road and I really don’t—” Paul responded. “I’m not sure about exactly what is going on with that.”

“It’s making some people nervous, but it doesn’t take much to make people nervous nowadays,” Mickelson said. “If you get a chance to, I’d like to know what the rest of the story is on that.”

“We’ll look at that also,” Paul assured him.

A spokesman for Paul did not immediately respond to a request for comment from TPM on Thursday.

Josh Marshall at Talking Points Memo snarks, “The White House insists it is not planning a military takeover of the country or Texas. But of course they’d say that.” After all, it’s a conspiracy dontcha know.

The fact-free world of the conspiracy mongering, hate mongering conservative media entertainment complex is one of the most destructive forces that exists in America today. It has always been with us, but it has been exacerbated by radio, television, the Internet and social media. It has created a “community” of like-minded nut-jobs where, in the past, these individual nut-jobs were isolated and would have kept to themselves out of fear of winding up in a straight-jacket in a padded cell for their own safety. Now they openly celebrate their teh crazy.

UPDATE 5/4/15: But of course . . . Dave Weigel at Bloomberg Politics reports that Sen. Ted “Calgary” Cruz (R-TX) is also down with teh crazy. Ted Cruz Says He Has Asked the Pentagon for Answers on Jade Helm 15. And “Walker Texas Ranger,” Chuck Norris: Don’t Trust The Gov’t On A Possible Military Takeover Of Texas.