But for some unexplored reasons these voters behave as if they only need to vote every four years, and fail to appear during mid-term elections. As Samuel L. Jackson said in his now famous video ad from 2012, “WAKE THE FUCK UP!”

Stan Greenberg of Democracy Corps for Women’s Voices Women Vote has a  new poll out today that illustrated the mid-term dropoff from 2012 in turnout among key voter groups. Greg Sargent breaks it down in today’s Morning Plum:

The poll — which was done by Stan Greenberg of Democracy Corps for Women’s Voices Women Vote — finds that voters nationwide in the Rising American Electorate (unmarried women, young voters, minorities) are significantly less likely to vote in 2014 than other voters (non-RAE voters) are.

This is the core of the Dem dilemma: RAE voters are increasingly key to the victorious Dem coalition in national elections, thanks to the diversifying electorate. But they are among the least likely to turn out in midterms, unlike more GOP-aligned non-RAE voters, such as middle-aged and older white males and married women. 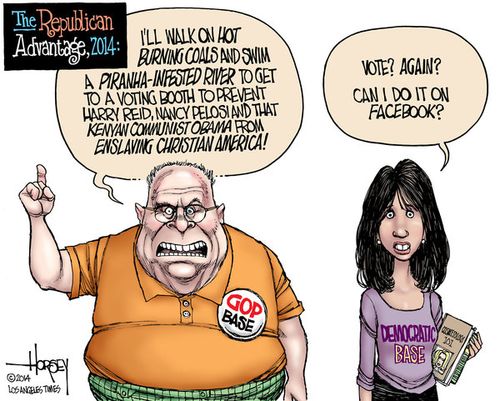 But the poll also suggests Dems may be able to offset this problem with a focus on concrete economic policies for working and middle class Americans — particularly women — such as equal pay and a minimum wage hike.

– Among RAE voters who say they are “likely” to vote in 2014, Dems hold a 25 point edge in the generic ballot matchup, 57-32. But that is down 10 points from the edge Dems held among these voters in 2012, when it was 35 points, 67-32. (See slide five.) That’s a substantial drop-off among voters Dems will absolutely need to offset their disadvantages on a map concentrated in states carried by Mitt Romney.

– Among those voters who will drop off from 2012 and not vote in 2014, Dems hold a big edge of 16 points, 49-33. In other words, the voters who are more likely to stay home are overwhelmingly Democratic voters. (See slide eight.)

The good news for Dems: Their issues are overwhelmingly popular with unmarried women (who are emerging as a key RAE constituency in these Senate races, because they tend to drop off faster than married women), particularly when economic proposals are packaged together into a broader agenda:

– 94 percent of unmarried women favor a combination of pay equity and protections ensuring insurance companies no longer charge women more than men, as Obamacare does, with 82 percent favoring it strongly. (See slide 13.)

– 75 percent of unmarried women favor a combination of pay equity and increasing the minimum wage, with 55 percent favoring it strongly.

“The turnout and support of unmarried women and the rest of the Rising American Electorate will determine the 2014 elections,” Page Gardner, president of Women’s Voices Women Vote, tells me. “This survey is a roadmap showing candidates how to succeed, by speaking about equal pay and an economic agenda that benefits women and their families. Our poll make clear that raising the minimum wage, ensuring equal pay for women and guaranteeing paid sick leave for working women are popular policies that will win elections.”

All elections are base voter elections. The party that wins an election is the party that turns out its base voters. There are more Democrats and Democratic “leaners” nationally than there are Republicans and Republican “leaners.” Republicans only win when Democrats stay home and do not turn out to vote. Period.

Yes, the GOP works hard to suppress Democratic voter turnout, but their voter suppression efforts can be overwhelmed by voter turnout, as it was in 2008 and 2012. You really have no one to blame but yourselves and your lame-ass excuses for not voting in mid-term elections. No more excuses!

If you want to end the dysfunctional less-than-do-nothing Congress, the worst Congress in American history; if you want to end the far-right radical extremist control of the Arizona legislature — then Democrats have to get off their asses and organize, mobilize and VOTE! The future is in your hands.