A recession is a normal part of the business cycle that generally occurs when GDP contracts for at least two quarters.

We are halfway there. U.S. gross domestic product fell at a 4.8 percent annual rate in the first quarter of the year, the worst quarterly contraction since 2008, when the country was in a deep recession (most of this contraction occurred in the second half of March after coronavirus lockdown orders). Worst Economy in a Decade. What’s Next? ‘Worst in Our Lifetime.’ “Economists expect figures from the [second] quarter, which will capture the shutdown’s impact more fully, to show that G.D.P. contracted at an annual rate of 30 percent or more, a scale not seen since the Great Depression.”

A depression, on the other hand, is commonly defined as an extreme recession that lasts three or more years or which leads to a decline in real gross domestic product (GDP) of at least 10 percent. We will be there when the second quarter GDP numbers are released in July.

A depression is characterized as a dramatic downturn in economic activity in conjunction with a sharp fall in growth, employment, and production. Well, we don’t have to wait for the second quarter data to pronounce the patient: the Trump Depression is already here.

To make matters even worse, this figure almost certainly understates the true situation. April unemployment numbers are released in May based on surveys that took place during the week that contained April 12. And since April 12 in the US, things have only gotten worse: The initial unemployment insurance claims figures released in the final two weeks of April indicate that the labor market continued to deteriorate at a rapid pace, albeit slightly less rapidly than in the first weeks. Ernie Tedeschi, a labor market economist, projected Thursday based on real-time data that the current unemployment rate is actually 20 percent. And in the jobs report, the Bureau of Labor Statistics said it believes murky classification of temporary unemployment in the household survey caused the official number to be about 5 percentage points lower.

[M]any employers have cut salaries and benefits even for workers who haven’t been laid off, so there are pockets of income loss that are worse than what you’d expect from the unemployment numbers. Others may still be working in restaurants or hotels but dealing with a precipitous decline in tips as fewer customers come in the door.

The big picture: The economy is at grave risk of experiencing big secondary and tertiary economic impacts separate from the hit to the labor market caused by the virus itself.

When people don’t have money, they don’t buy new cars or new appliances. They don’t remodel kitchens or buy restaurant meals. When incomes drop, state and local tax revenue drops, forcing layoffs and furloughs of teachers and firefighters who in turn need to cut back on their spending.

Vox continues its analysis, The state of employment in pandemic America, in 6 charts:

Here’s what we know so far about the coronavirus’s effects on the US labor economy, in six charts.

1) The unemployment rate is now at nearly 15 percent

The preliminary unemployment rate jumped to nearly 15 percent in April and total nonfarm payroll employment fell by 20.5 million, according to Friday’s Bureau of Labor Statistics jobs report data. To put that in perspective, the unemployment level had been at a longtime record low of 3.5 percent as recently as February, and it’s now higher than during the Great Recession. Job losses were most severe in the leisure and hospitality industries. In March, the Federal Reserve Bank of St. Louis predicted that the unemployment rate could eventually reach 32 percent — higher than levels seen during the Great Depression. [In 1933, unemployment peaked at 24.9%]. Note that jobs report data is based on the pay period that includes the day 12 of the month, so April’s numbers wouldn’t include unemployment that happened later in the month. Weekly unemployment insurance claim numbers suggest April’s rate is going to continue to rise. 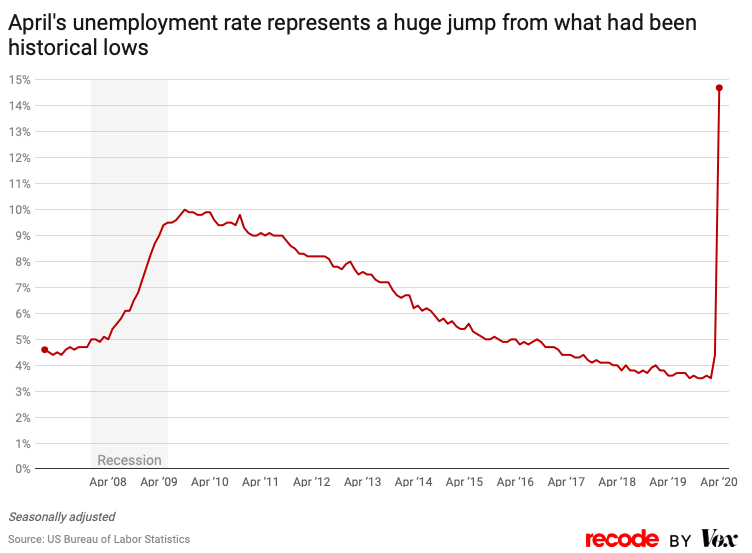 2) One in five American workers has filed for unemployment

On May 7, the Department of Labor reported an additional 3.2 million initial unemployment claims for the last week. [Note: These are the lucky ones who were able to actually get through antiquated state unemployment systems.] That means in the seven weeks since governments began shutting down businesses to prevent the spread of the coronavirus, more than 33 million people have gone on unemployment. That’s about one in five American workers. These past few weeks represent the highest level of unemployment claims on record. Prior to major shutdowns, the unemployment insurance claims figure was 280,000 in the week ending March 14. 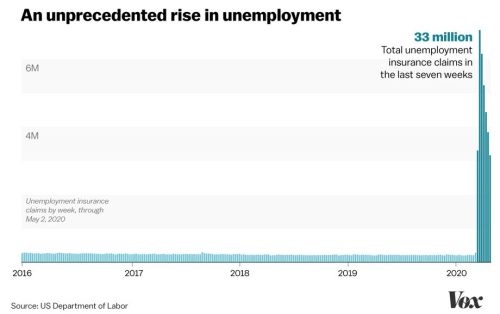 The economic pain of the coronavirus isn’t only evident in statistics from those who lost their jobs. Many Americans have seen their hours reduced from what they were a few months ago. The average workweek for private sector workers stayed pretty steady, rising slightly in April after declining to 34.1 hours in March from 34.4 hours in February. During the last recession, this number dipped to 33.7 hours per week. Again, this data reflects only through the pay period including April 12. 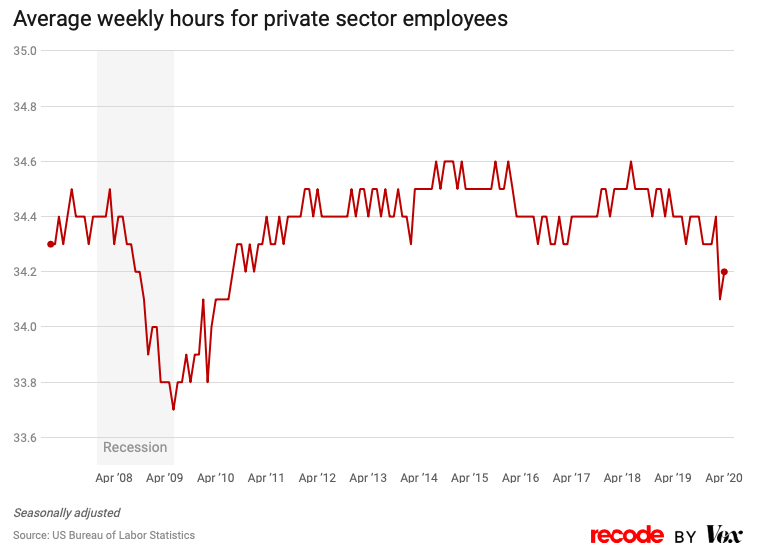 4) Job listings are down 40 percent from last year

The number of listings on Indeed, the largest US job site by traffic, is currently down 40 percent compared with last year. That’s bad news for the many newly unemployed and suggests the situation won’t be getting better soon. As Mark Muro, a senior fellow at Brookings Institution’s Metropolitan Policy Program, told Recode in March, when listings were down around 7 percent, “Posting a job is a forward-looking glimpse of managers’ sense of a business’s prospects. This is a vote of no confidence.” 5) Job hiring is down across industries

As a result of all the above indicators, hiring is down as well. In April, hiring across industries on the platform was down nearly 30 percent, compared with the same month a year earlier, and down 24 percent compared with March 2020. Hiring in recreation and travel took the hardest hit, down 60 percent compared to last year, as the industry has suffered from travel bans and stay-at-home directives. Segments like public safety, education, and hardware and networking have also seen declines in hiring, though not nearly as bad as jobs overall. 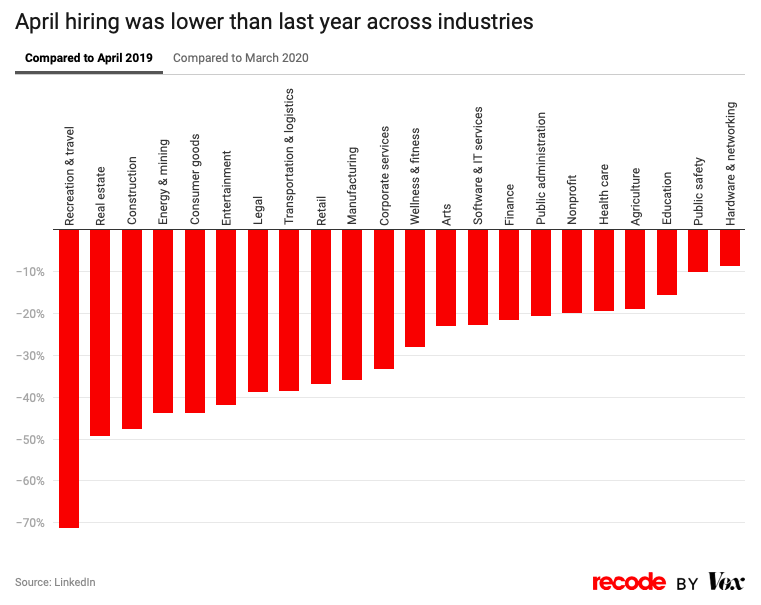 Working from home has allowed many businesses to attempt to continue business as usual. MIT has estimated that about a third of the workforce that had previously commuted to work was able to work from home during the pandemic. And it’s likely that when this is all over, many office workers, at least, will not return to their offices. In April, more than 1,000 public company transcripts mentioned the topic of working from home, mostly in conjunction with mentions of the coronavirus. That’s more than the entire last decade combined. 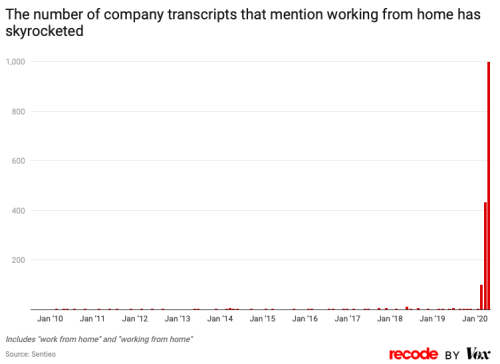 While stay-at-home measures have undoubtedly helped lessen the number of coronavirus cases and deaths in the US, they’ve also had serious economic repercussions. That’s been felt most by those who’ve lost their jobs, as companies try to cut down on costs amid a bleak economy, and automation is likely to rise. Of those who are still employed, many might not return to the office as they knew it, or at all. Those in the gig economy or who are essential workers have had to brave dangerous conditions, often without an increase in compensation, as their jobs become even more integral to American life.

Not included in those titanic rates are people who have left the labor force. In March that count was 1.63 million, a huge shift, but nothing like the 6.4 million tallied in April. Most of those people would still be in the workforce were it not for the shutdown. And many of those may not have been counted because they were out of work and hadn’t looked for a job in the past four weeks, which is the bureau’s definition of no longer in the work force even if the individuals still consider themselves part of it. The fact that so many left the labor force is one reason that the unemployment rate isn’t considerably higher. Nonetheless, said James Sweeney, chief economist at Credit Suisse Group AG a day ahead of the BLS release: “This might be the worst macroeconomic data report in U.S. history.” He may have to supersede that assessment when the May report comes out June 5.

You are going to hear a lot of bravado bullshit coming from the White House and its right-wing propaganda machine that we are going to see a quick economic turnaround in the coming months now that states are ending coronavirus lockdown measures, even as coronavirus infections continue to climb nationally because there is still no plan for test/trace/isolation.

We are going to see a series of outbreaks continue across the country and a “second wave” of the coronavirus pandemic. Most people are not going to be willing to risk their life or the life of a family member by going back to work, or eating out, or going shopping, etc., when it is unsafe to do so. There is not going to be anything resembling a quick economic turnaround until there is a vaccine widely available. As indicated above, the economy is at grave risk of experiencing big secondary and tertiary economic impacts separate from the hit to the labor market caused by the virus itself.