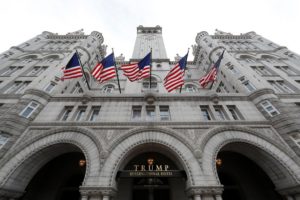 Over the weekend the New York Times and the Washington Post did some excellent investigative reporting into the shady finances of Donald Trump and his consigliere Michael Cohn. The more we learn about Cohn’s “pay to play” scheme, and the two pending lawsuits challenging Trump’s “pay tp play” scheme under the emoluments clauses of the U.S. Constitution, the more this feckless GOP-controlled Congress has an obligation to investigate Trump’s tax records and financial dealings as president to “drain the swamp”: this is the most corrupt administration in recent American history.

Steve Benen has a decent short summary, The closer one looks at Trump’s finances, the louder the questions become:

Last summer, Donald Trump sat down with the New York Times, which asked whether Special Counsel Robert Mueller will have crossed “a red line” if the investigation into the Russia scandal extends to include examinations of the resident’s finances. “I would say yeah. I would say yes,” he replied, adding, “I think that’s a violation.”

Naturally, this generated no shortage of speculation as to why Trump is so concerned about scrutiny of his finances. For that matter, there’s no reason to separate questions about the president’s finances with the Russia scandal – because as Rachel Maddow has explained on her show more than once, there’s an amazing number of people from Russia who’ve purchased Trump properties over the years. (My personal favorite is the story of Dmitry Rybolovlev, the fertilizer king, who purchased a derelict Florida estate from the future president at an extreme markup.)

Keep all of this in mind when reading this amazing report from the Washington Post over the weekend, As the ‘King of Debt,’ Trump borrowed to build his empire. Then he began spending hundreds of millions in cash, on Trump’s unexplained shift in strategy, evolving from someone who loved taking on debt and spending others’ money to someone who was suddenly flush with cash.

In the nine years before he ran for president, Donald Trump’s company spent more than $400 million in cash on new properties – including 14 transactions paid for in full, without borrowing from banks – during a buying binge that defied real estate industry practices and Trump’s own history as the self-described “King of Debt.”

Trump’s vast outlay of cash, tracked through public records and totaled publicly here for the first time, provides a new window into the president’s private company, which discloses few details about its finances.

The entire Post  piece is well worth your time – it’s an impressive piece of reporting, and I’m only touching on some of its revelations – but pay particular attention to the fact that Trump had one ironclad set of principles, which guided his entire business strategy, which he suddenly abandoned without explanation.

Barbara Res, who was a top executive for Trump throughout the 1980s and continued to work for him for most of the 1990s, told the Post, “He always used other people’s money. That’s for sure. Not cash. He always got somebody to put up funds for him. To put up the money. And he’d put up the brilliance.”

At face value, his willingness to abandon this approach seems difficult to understand. Trump’s entire business philosophy was tied to the belief that he could succeed by getting money from others – investors, banks, partners, et al – and putting it to good use. But he adopted an entirely new posture in 2006, as the real-estate bubble started to burst and not long before some of his enterprises went bankrupt, investing millions in cash on new properties, some of which continued to lose money after the purchases.

What was it exactly that led Trump to embrace an entirely new investment strategy, with liquid assets of unknown origins?

The article covers a lot of ground – it, too, is well worth your time – but this jumped out at me.

Like many of Mr. Cohen’s business dealings, the transactions were unconventional. His companies would buy a building, often in cash. Soon after, they would flip the building in another all-cash deal for four or five times the previous purchase price. The buyer was generally another limited liability company.

In October 2011, for example, a limited liability company listing as its address Mr. Cohen’s apartment at Trump Park Avenue purchased a building on Rivington Street on Manhattan’s Lower East Side for $2.1 million. In 2014, Mr. Cohen sold the building for $10 million in cash – nearly five times what he paid three years earlier.

That same day, Mr. Cohen sold three other Manhattan buildings, also entirely for cash. In total, the four buildings sold for $32 million – nearly triple what Mr. Cohen had paid for them in the span of no more than three years.

The more we learn about Trump World’s finances, the louder the questions become.

Cash deals in real estate, in particular from foreign buyers from countries known for corruption and on the Treasury’s watch list, is a big red flag for money laundering, something for which Donald Trump is known to have a good deal of experience. See, for example, Trump’s casino was a money laundering concern shortly after it opened, TRUMP MADE MILLIONS OF DOLLARS FROM DRUG MONEY LAUNDERING IN PANAMA: REPORT, Trump money laundering in the Netherlands: Paper trail could be the end, Is Money-Laundering the Real Trump Kompromat?

This is just a tease from a massive amount of reporting of publicly available information. It is likely just the tip of the iceberg of what is actually going on in the Trump empire. Hopefully Special Counsel Robert Mueller and his all-star team of financial crimes prosecutors and investigators are untangling the web of corruption in the Trump administration, something our GOP-controlled Congress has failed entirely to do in enabling the Trump Swamp.