Last month, after being denied bail on federal sex trafficking charges, Epstein was found unconscious in his jail cell with marks on his neck. Prison officials had been investigating the incident as a possible suicide attempt.

Epstein was placed on suicide watch after the incident on July 23 and received a daily psychiatric evaluation, according to a person familiar with his detention. He was removed from suicide watch on July 29. After His Suicide Watch Ended, Jeffrey Epstein Was Left to Look After Himself:

Had Jeffrey Epstein still been on suicide watch at the Metropolitan Correctional Center, regulations would have required him to remain under constant observation by trained “companion” inmates.

“They must be mature, reliable individuals who have credibility with both staff and inmates,” the regulations say of the companions, who are paid prison wages and rotate around the clock in shifts of no more than five hours so as to stay alert.

Regulations also would have required Epstein to be housed in a “suicide prevention room,” which “may not have fixtures or architectural features that would easily allow self-injury.”

And the Program Coordinator would have had to continue consulting with the Regional Psychology Administrator, as was required when Epstein first went on suicide watch and again when it extended beyond 72 hours.

Meanwhile, the inmate companions would have maintained their 24-hour watch. A companion would have only needed to sound an alert for the prison staff to spring into action.

But on July 29—six days after the incident that led to his placement on suicide watch and seems in hindsight to have more likely been an actual attempt to take his own life rather than a stunt resulting only in minor bruises around the neck—Epstein was deemed to be “no longer at imminent risk for suicide.” Regulations mandated a final evaluation by the Program Coordinator.

Reuters reports that prison guards skipped mandatory checks on Epstein prior to his suicide: “At the MCC, two jail guards are required to make separate checks on all prisoners every 30 minutes, but that procedure was not followed overnight, according to the source. In addition, every 15 minutes guards are required to make another check on prisoners who are on suicide watch.”

This would appear to be a total clusterfuck by the Department of Justice and the Federal Bureau of Prisons. Attorney General William Barr has some splainin’ to do.

The F.B.I. said it was investigating, and Attorney General William P. Barr said in a statement that a special inquiry would be opened into what happened.

“I was appalled to learn that Jeffrey Epstein was found dead early this morning from an apparent suicide while in federal custody,” Mr. Barr said. “Mr. Epstein’s death raises serious questions that must be answered.”

In addition to the F.B.I., the Inspector General, the Justice Department’s internal watchdog, will open an investigation into Mr. Epstein’s death, Mr. Barr said. The Metropolitan Correctional Center is run by the federal Bureau of Prisons.

News that convicted pedophile Jeffrey Epstein committed suicide in his Lower Manhattan jail cell on Saturday morning brought out the conspiracy theorists in force wondering how a prisoner on suicide watch could hang himself undetected.

Needless to say, many speculated — and rightly so — that more than a few rich and powerful men likely breathed a sigh of relief that the jet-setting millionaire would not come to trial or work out a plea deal that could involve names not already mentioned.

As one commenter speculated:

That was the general tenor on Twitter, see below: 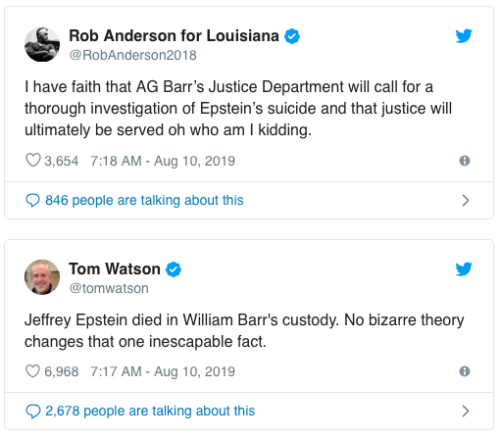 According to a report from the Daily Beast, White House aides admitted that — upon receiving notice that wealth manager and convicted pedophile Jeffrey Epstein committed suicide while incarcerated — Donald Trump would begin pushing conspiracy theories.

And they were right.

According to The Daily Beast, “One White House official said that as soon as Clinton conspiracy theories began bubbling up online about Epstein’s passing, this official and other senior aides to Donald Trump immediately assumed that the president, an avid, longtime conspiracy theorist, would very soon tweet or say something about it.”

“The aides, this official noted, began casually discussing and joking about what to do if Trump started going hard at the Clinton body-count conspiracy-theory-mongering,” the report continues. “The general consensus among the president’s advisers is there is nothing they can do except wait for him to move on to something else, and hope he doesn’t make this a big thing.”

One Trump advocate found the president jumping all over the Clinton conspiracy amusing, and said it was Trump’s way of stirring up his base.

“The Clinton body count stuff is up there with Kennedy assassination conspiracy when it comes to political reading. It’s too juicy to ignore,” explained former Rep. Jack Kingston (R-GA).

Moments after billionaire pedophile Jeffrey Epstein was announced dead in what law enforcement sources described as an apparent suicide in his New York City jail cell, conspiracy theories about his death erupted. By Saturday evening, President Donald Trump was retweeting the theories.

While some pointed to a history of negligence in New York City jails (though MCC is a federal facility), others were quick to claim various Epstein associates had done him in. On Saturday evening, Trump retweeted some of the conspiratorial claims, without evidence. (This from Terrance Williams, an actor, comedian, ad “commentator” on Twitter). 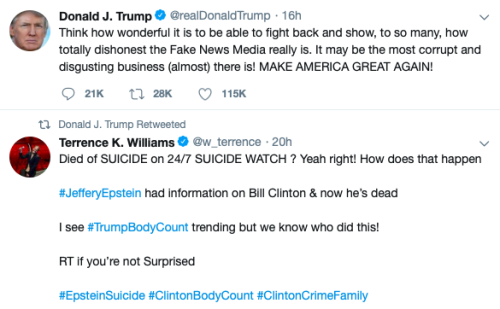 It’s not surprising that Epstein’s death would be such rich fodder for conspiracy theories; he had documented connections with the wealthy and powerful on both sides of the political aisle. Court filings by his accusers allege a plot in which Epstein and his associates recruited underage girls and forced them to have sex with Epstein’s associates. Reports of the alleged crime ring fed into other, more speculative theories, including those with a strong partisan bias that only implicate Epstein associates from one side of the political spectrum.

Questions over Epstein’s suicide watch fanned those flames on Saturday. Epstein had reportedly recently left suicide watch when he died on Saturday, raising questions about why he was not being monitored.

“Hillary’d!!” Lynne Patton, a Trump-appointed head of public housing in New York and New Jersey posted on Instagram shortly after Epstein was reported dead. “P.S. Let me know when I’m supposed to feel badly about this…”

Patton concluded the post with a hashtag alluding to a right-wing conspiracy theory that falsely claims the Clinton family orchestrated the death of a former deputy White House Counsel. (Patton is a former Trump family event planner, who’s falsely implied that she attended Yale.)

FOX Business host Lou Dobbs tweeted a similar version of the theory claiming that Epstein “Epstein should have been at least on Arkanside Watch,” a mashup of “suicide” and Bill Clinton’s home state of Arkansas.

Patton and Dobbs were far from the only social media user to implicate the Clintons in Epstein’s death. On Saturday morning, “Another Clinton,” “#ClintonBodyCount,” and “#ClintonCrimeFamily” trended on Twitter, alongside “‘Suicide’” (in quotation marks) and “Prince Andrew.”

Former President Bill Clinton was not named, although he has been linked to Epstein. Clinton took trips on Epstein’s plane in 2002 and 2003, and Epstein visited the Clinton White House, The Daily Beast previously reported.

The conspiratorial posts were not limited to the right. Epstein is also a former Trump associate, and was filmed discussing women with Trump at a party. The woman who accused Epstein of trafficking her at age 16 said she had been working at Trump’s Mar-a-Lago resort when Epstein recruited her.

“Something stinks to high heaven,” McCaskill wrote. “How does someone on suicide watch hang himself with no intervention? Impossible. Unless…..”

Joe Scarborough, an MSNBC host and former Republican congressman (now a registered independent) appeared to blame Russian interference for the death.“A guy who had information that would have destroyed rich and powerful men’s lives ends up dead in his jail cell. How predictably…Russian,” Scarborough tweeted. “He reportedly tried to kill himself two weeks ago. And is allowed to finish the job now? Bullshit.”

4) Black worked with Epstein, who may have been an MBS money manager.”

(Abramson also riffed on a different theory: “Understand that the reason Russian bots are all over the Internet making wild claims about a Clinton connection to the Epstein suicide is because key people in the United States and abroad know the Trump connection to Epstein is the one that matters, and is the real story here.”)

Followers of the far-right QAnon conspiracy theory suggested that Epstein faked his death. Believers in the theory circulated a picture of a corpse and questioned whether it looked like Epstein.

This the world that Silicon Valley and social media companies have given us. It is not for the betterment of mankind.

Kasman said he heard US Attorney General William Barr personally made a hush-hush trip to the MCC two weeks ago, about the time Epstein was found in his cell with bruises around his neck.

“When does that happen?” he asked. “The attorney general never visits jails. Something’s not right there.”

That’s uncorroborated hearsay from a mobster, but you can thank Rupert Murdoch for this kind of reporting.

Check out all the ways you can watch the 2020 Democratic...