The unmitigated gall of these people

Home/Education/The unmitigated gall of these people
Previous Next

The unmitigated gall of these people 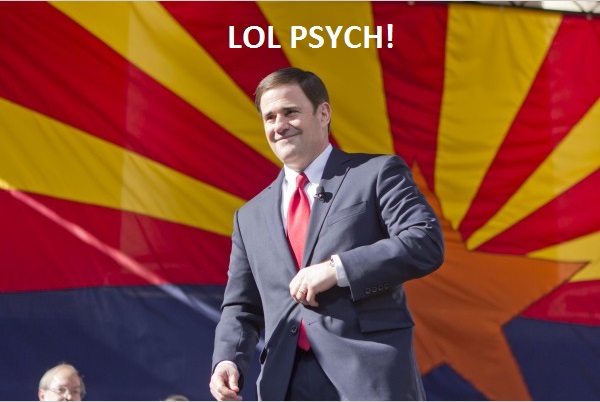 Governor Ducey’s team decided to take a Friday news dump on Arizona by releasing his proposed budget. One of the items people noticed right away was the $75 million cut to universities. Which is weird since didn’t we spend the whole 2014 general election being told how we shouldn’t vote for that dastardly Fred DuVal because he was entirely to blame for college tuition increases while he was on the Arizona Board of Regents? Remember ad after ad featuring stock photos of fresh-faced concerned-looking young people and the ominous voiceover darkly warning of more increases – that would break middle class families! – if DuVal got near the Capitol? Candidate Ducey promised several times to “put more money in the classroom”.

If you want to know how quickly they’ve dropped even the pretense of caring about struggling college students, take a look at this comment to the AZ Republic report on the proposed university cuts by a Kevin Calabrese, who appears to be some kind of Young Republican operative and Nathan Sproul flunkie.

Assuming that each of the three universities will have $25,000,000 less in funding, a tuition increase of around $150 per student would make up the difference.

It’s like September and October of 2014 never happened! I’m constantly astonished at their ability to lie and to bait and switch so flagrantly and seamlessly. It’s remarkable, really.