This is what has Rep. Martha McSally hiding in the chicken bunker

Home/AZ Politics/This is what has Rep. Martha McSally hiding in the chicken bunker
Previous Next

This is what has Rep. Martha McSally hiding in the chicken bunker

This is what has Rep. Martha McSally hiding in the chicken bunker:

Rep. Jason Chaffetz (R-Utah) represents one of the reddest districts of a deep-red state. As chairman of the House Committee on Oversight and Government Reform, he promised to continue his years-long witch hunt of Hillary Clinton if she was elected president, but now says he will not investigate President Trump‘s multiple conflicts of interests or tax returns (for possible violations of the Emoluments Clause of the Constitution). Chaffetz Won’t Investigate Trump Because He Only Cares About Investigating Democrats. 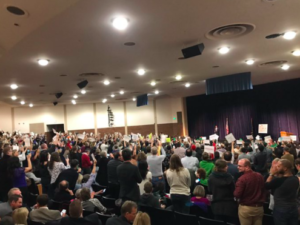 Chaffetz got a frosty reception in his home state on Feb. 9, at a town hall (video).

Angry constituents packed a high school auditorium, grilled the congressman with questions and peppered him with boos and chants while protesters amassed outside. “Do Your Job!” Hundreds of People Shout Down Jason Chaffetz Over Lack of Trump Probe:

At a town hall meeting on Thursday night held by Rep. Jason Chaffetz (R-Utah), the chair of the House Oversight Committee, the mood got rough, when hundreds of people demanded answers from Chaffetz regarding a host of controversies: his unwillingness to investigate President Donald Trump’s conflicts of interest, his support for Obamacare repeal, a proposal to sell off public lands, and more.

“You’re really not going to like this part,” Chaffetz said at one point. “The president under the law is exempt from the conflict of interests laws.”

That remark—and many of his other comments—was met with jeers, as people chanted, “Do your job!” and “We want to get rid of you!” The raucous event came amid complaints from Democrats on the committee that Chaffetz won’t investigate the Trump administration’s various global entanglements and possible ethics violations.

The angry crowd also blasted Chaffetz for a bill he introduced in January to sell off public lands and for his efforts to defund Planned Parenthood.

During a meeting with Trump in the Oval Office Tuesday, Chaffetz afterward said the president had instructed him not to raise the topic of “oversight”—to which he had replied “fair enough.” Some town hall attendees expressed anger over Chaffetz’s failure to confront the president on this point. Others threatened his current term would be his last.

The town hall meeting reportedly ended 40 minutes early, with Chaffetz refusing to take questions from the press as he departed.

As the Washington Post’s conservative blogger Jennifer Rubin says, “If Chaffetz wants to block and tackle for an administration that shows no respect for formal or informal ethical rules, the remedy is with the voters — and not just those in Utah’s 3rd Congressional District.” Jason Chaffetz is a walking advertisement for divided government.

Remember, this is a supposedly “safe” Tea-Publican from a “safe” red district. (Rep. McSally is from a “swing” district with a Democratic voter registration edge that voted for Hillary Clinton in November). The video above is not of Democratic activists hoping to “trap people in a political ambush for political theater” as Rep. McSally recently whined to the Arizona Daily Star, those are GOP constituents who voted for Chaffetz.

McSally almost certainly has angered a number of her GOP constituents as well as her Democratic constituents.

Tucson Weekly Editor Mari Herreras asks, McSally, remember when you were a lion?

I recall sitting in the Sabino High School auditorium about six years ago, listening to four Republican candidates explain why they were the best choice to fill the CD 8 seat left vacant by Congresswoman Gabrielle Giffords.

McSally, who didn’t win that race, told the crowd that she once took a personality test that compares people to animals, and she came out a lion. McSally said that’s “for people who are warriors and are leaders and want to get things done.”

According to this week’s The Skinny column by Jim Nintzel, McSally is avoiding—and has been for weeks now—a request by constituents to have an open town hall to hear what they have to say and hear what their congresswoman has to say in return:

McSally spokesman Patrick Ptak denies that there’s an effort to avoid having a town hall, but told The Skinny that McSally has been busy with work in Washington since Trump was sworn into office.

“We regularly hold town halls and are in the process of scheduling more in the weeks ahead,” Ptak said. “More announcements will come as we get those scheduled.”

Ptak pointed to a list of more than three dozen town halls McSally hosted in her first term after winning office in 2014. Of those, about 20 were at businesses, ranging from IBM and Raytheon to the American Red Cross and the Art Institute of Tucson. Another nine were at senior centers and five were tele-town halls, conducted as conference calls to a wide audience.

Another tele-town hall was scheduled for this week[.] 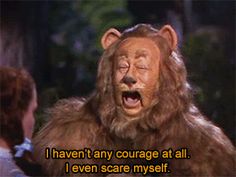 McSally has always described herself as a warrior, but ignoring calls to meet with constituents and have a town hall meeting isn’t, well, very warrior like, is it?

Folks from her office say it will happen, we just don’t know when or if it will be the kind of town hall people are asking for. If McSally really is on the fence, I guess I just want to remind her that she is a lion, after all, and unless she is of the cowardly variety, a town hall meeting should be easy.

David Safier at The Range blog of The Weekly makes the point that what this cowardly lion needs is courage, like her Democratic predecessors, Rep. Ron Barber and Rep. Gabrielle Giffords. Rep. Martha McSally, Former Rep. Ron Barber, and Courage:

McSally held a tele-townhall, a quiet event where people ask questions from their home phones and she answers from the safety of her office. One questioner asked why she hasn’t scheduled any recent face-to-face town halls. McSally defended herself by saying Democratic activists just want to use those events as political theater to ambush Republicans. And you know, she’s not wrong. Democrats do hope to score political points by holding her feet to the fire and making her as uncomfortable as they can. I admit, it takes courage to schedule an event knowing you’re going to be attacked verbally, to stand up in front of a group of constituents, many of them hostile to your ideas, and do your best to hold your own. But for someone who puts her 26 years in the Air Force at the top of her official biography, touting her courageous combat missions flying the A-10 Warthog in Iraq and her refusal to wear Muslim garb when she travelled off-base in Saudi Arabia, McSally is showing a distinct lack of courage under political fire.

By way of contrast, let me note an example of courage from her predecessor, Rep. Ron Barber. When Rep. Gabrielle Giffords was shot during her Congress on Your Corner event January 8, 2011, Barber was among 18 others shot at the event. Barber went on to win the congressional seat in 2012. He didn’t have to continue Gabby’s Congress on Your Corner tradition, but he chose to anyway, standing in the public square and taking questions and comments from constituents. Given his experience two years earlier, that had to be far more terrifying than facing a roomful of people at a town hall. His first of several Congress on Your Corner events was held four days after he was sworn in, a frightening echo of Gabby’s January 8 event which was held four days after she began her third term.

It’s also worth noting that Rep. Giffords stood in front of raucous, rowdy crowds during three town halls she held when the Tea Party was in full-on attack mode over the proposed Affordable Care Act. I attended one of them held in a packed high school auditorium. Republican activists were bussed in from around the Tucson area to disrupt the event. They stood and booed everyone who spoke in favor of the proposed health law, drowning out their comments. They cheered with equal fervor when someone spoke on their side, though they interrupted their cheering long enough to allow the speaker to be heard. Gabby stood her ground throughout the event.

I visited a demonstration of about 125 people outside her office Tuesday morning and talked to many attendees. They are Democrats, for the most part, and they are angry, in large measure at President Trump and his actions. But their demand is sincere: What they want is to face McSally and tell her how they feel.

Then-Rep. Gabrielle Giffords faced similar demands in 2010 from tea-party members, and she held three real town-hall meetings — live ones that anyone could attend — anyway.

“Gabby faced it,” said Ron Barber, who was Giffords’ district director and successor till McSally beat him in 2014. “It was ugly — and I thought dangerous at one point. The point I’m making is that she was not afraid, even in the face of a screaming mob, to let her constituents talk to her.”

“Courage” is not defined by McSally’s  press flak or campaign materials, but by her actions. As we have pointed out at this blog for years, McSally has consistently avoided answering questions from her constituents, strictly controlled her public events before friendly audiences, and has even  controlled and limited the number of debates in which she will participate. She has spent a lot of time hiding in the chicken bunker.