Under the order issued by U.S. District Judge Dana Sabraw in San Diego, TODAY is supposed to be the deadline for reuniting the more than 2,500 children who were taken from parents apprehended while crossing the border. Yeah, that didn’t happen. As deadline for family reunification arrives, reports of chaos, confusion as to immigrants’ next steps:

Government lawyers have conceded they will fail to reunite all the families by that deadline — hundreds of parents already have been deported without their children, and the government has been unable to locate many others. Officials said in court Tuesday they expect to have reunited just over 1,600 families by the deadline.

Despite the administration’s hardline stance, hundreds of those families have been released on immigration parole, pending hearings on their asylum claims, typically with the adults wearing ankle monitors. Scores of other families, however, have been sent to immigration detention centers, including two in Texas where at least 80 families are being held in custody.

Why some families have been released and others detained remains unclear, as is how long those detentions may last, according to lawyers for the families. Government officials have refused to provide answers.

Axios.com has a breakdown based upon the latest court filings from the Justice Department: 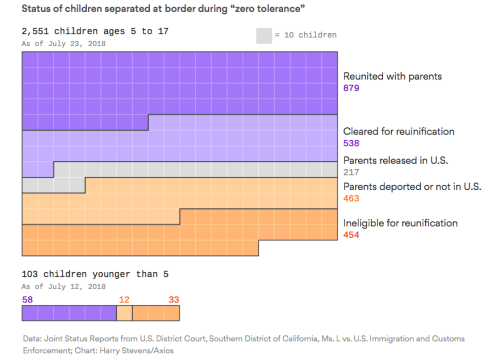 Some 900 parents are fighting final deportation orders. Lawyers for the American Civil Liberties Union have asked Sabraw to delay those deportations to give the parents more time to decide whether to leave the country with their children or separate from them and have the children continue to press for asylum claims of their own. Deportations of these families have been halted by the judge, for now.

Government lawyers say that at least 127 parents voluntarily agreed to leave their children behind. But in affidavits filed Wednesday, pro bono lawyers working at detention centers along the border said some parents believed they were signing forms to temporarily release their children to relatives in the U.S. Others were coerced or frightened, and many were given documents they could not read, the lawyers have said. Some of the families primarily speak indigenous languages and are not literate in Spanish or English.

The government has argued that families have had ample time and opportunity to discuss their legal options over phone calls or after being reunified. But ACLU attorney Lee Gelernt said in a Wednesday filing that the access to such communications has been overstated.

“These phone calls allow barely enough time for parents to get basic reassurance that their children are alive and cared for. They are wholly insufficient to allow the parent and child a meaningful opportunity to speak with each other about the grave decision they must make together,” Gelernt said. “And, in any event, they do not allow parents to consult with any attorney for their children, leaving their children—in the several minutes they have on the phone—with the impossible task of accurately explaining their own legal options to their parent.”

One father told an attorney that he’d last spoken to his son 20 days earlier, and that he’d signed a paper that he thought would allow them to reunite but was clearly mistaken. He cannot read nor write, speaks a Mayan dialect and was not provided an interpreter.

Many parents who signed away their right to reunification expressed confusion about how their own immigration cases were proceeding. Some didn’t even have final removal orders and some had passed credible fear interviews, an important step to pursuing an asylum claim. They told attorneys that they were never advised that they could fight their asylum claims and reunite with their children — that it was not an either/or situation.

“None of the fathers I spoke with claimed to have been furnished with a copy of the form, or forms, that they signed,” said New York attorney Sofia Reive, repeating a common complaint among attorneys visiting with such families. “Thus it was difficult for me and for them to understand what exactly they had signed.

“Each father expressed confusion and visible, extreme emotional distress because they do not know when they will see their children again. Almost all of the fathers I met with wept as they told me about being separated from their children,” said Reive.

The judge is expected to rule on the ACLU’s request for a seven-day waiting period as early as Friday, when both parties next appear in court.

More than 450 parents already have likely been deported without their children, government lawyers told Sabraw this week. The precise number, perhaps 463, remains “under review,” they said. An additional 64 were deemed ineligible to be reunited with children because they had criminal records or other reasons that government officials said made them unfit.

At least 217 parents were released into the U.S. without their children, government lawyers said. Both the government and volunteer lawyers for the ACLU were trying to locate them in efforts to reunite the families.

The continued confusion, Sabraw said in court this week, was the “unfortunate” result of a policy adopted “without forethought to reunification or keeping track of people.”

Along the Southwestern border, immigration lawyers have described a reunification process as chaotic and scurried as the separations themselves. With family reunions often taking place in the parking lots of detention centers, activist groups have flooded the Texas border to provide help to often-exhausted, traumatized parents and children.

Annunciation House in El Paso has assembled hospitality centers with beds, meals, showers and a change of clothing for families. So far, it has helped 250 families who were released from detention after being reunified, the group said in a statement.

In the Rio Grande Valley, to the southeast, Catholic Charities had taken in another 100 families on Wednesday, and hundreds of volunteers were cooking meals and soliciting food donations.

Lawyers groups, such as the American Immigration Council, have been taking donations to provide counsel to parents seeking asylum or other forms of immigration relief. But ensuring families have access and can connect with lawyers has been trying.

At least 57 children under 5 were reunited with families under the court order.

Hundreds more children remain in the hands of the government — and as many as 37 have not been matched with a parent. Congressional Democrats, immigrant rights advocates and lawyers continue to clamor for answers about what’s next for the separated families and other migrant children.

There are Fears that some migrant children in US will never be reunited with their parents as deadline looms: Children taken from their parents at the US-Mexico border may never find their families again, legal experts have warned, as authorities scramble to reunite relatives ahead of a court-imposed deadline.

Last week, four members of an advisory council to the Department of Homeland Security resigned over the Trump administration’s policy of separating children and their parents at the U.S. border. In announcing their resignation, they called the policy “morally repugnant, counter-productive and ill-considered.” ‘Morally repugnant’: Homeland Security advisory council members resign over immigration policies:

The group noted that the Department of Homeland Security did not consult its advisory council before implementing the policy, which separated more than 2,500 children until President Trump reversed his endorsement of the practice amid an international outcry and signed an order instructing the agency to stop doing so.

“Were we consulted, we would have observed that routinely taking children from migrant parents was morally repugnant, counter-productive and ill-considered,” the group wrote. “We cannot tolerate association with the immigration policies of this administration, nor the illusion that we are consulted on these matters.”

Holtzman, who like Martin was appointed by former DHS secretary Jeh Johnson during the Obama administration, wrote to Nielsen that under Trump, “DHS has been transformed into an agency that is making war on immigrants and refugees.”

In an interview, Holtzman said she did not believe the resignations would have an impact on Trump’s decision-making on immigration. But she added, “I do think it’s important for the American people to see that not everybody connected with the government is a brute, is a lawbreaker and that actually some of us do have a measure of conscience.”

Holtzman was a co-author of the Refugee Act of 1980, which ensured American laws met international standards on the admission and treatment of refugees. 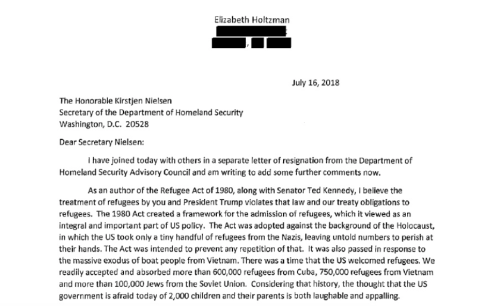 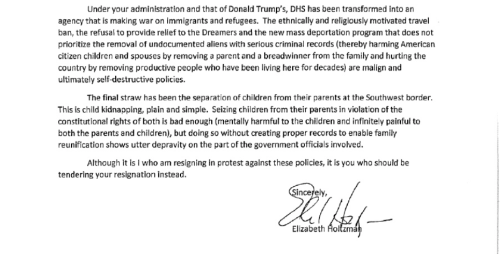