Oh no he didn’t … but of course he did. Trump tweets a meme of himself fiddling, drawing a comparison to Roman emperor Nero:

President Trump looked serene as he rested the left side of his face against the violin. The meme showed him with his eyes closed and seemingly relaxed playing the string instrument amid mounting concerns of the global spread of the novel coronavirus.

“My next piece is called,” the meme said in bold white letters, “nothing can stop what’s coming.”

When Trump tweeted the image on Sunday night, he said that while he appreciated the sentiment of the meme he was sharing from White House social media director Dan Scavino, he did not exactly understand the meaning behind it.“Who knows what this means, but it sounds good to me!” Trump tweeted. 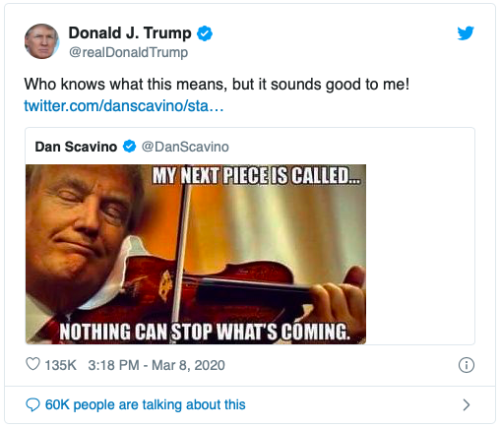 The symbolism of the image and language, however, was enough for many to form their own conclusions surrounding recent events. Trump sharing the image was looked at by critics as an allusion to the legend of Roman emperor Nero who fiddled as Rome burned around him.

Others pointed out that the line, “Nothing can stop what’s coming,” is a popular phrase linked to the far-right online conspiracy theory QAnon, whose followers have made their fringe presence known at the president’s rallies and have had their content promoted by Trump.

As The Washington Post’s Devlin Barrett noted, the QAnon slogan promoted by the president and Scavino on Sunday is “often used to suggest looming arrests of Trump’s critics, or similar vengeance.” 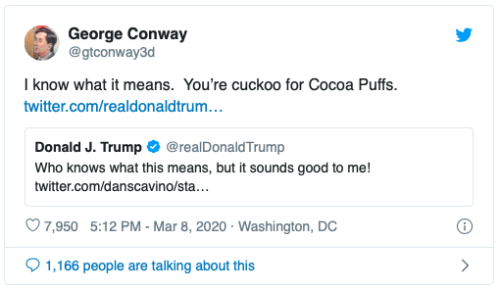 The meme came as the number of coronavirus cases in the United States topped 500 over the weekend, with the Dow expected to open down by as much as 1,200 points on Monday morning thanks to a new oil war sparked by the outbreak.

The CNBC headline this morning (above) just got worse as markets opened. Stock trading halted for 15 minutes after the S&P 500 craters 7%:

Stocks tumbled on Monday as investors braced for the economic fallout from the spreading coronavirus, while a shocking all-out oil price war added to the anxiety.

The Dow Jones Industrial Average tanked more than 1,800 points at the open. The S&P 500 dropped 6.8%. The sharp declines followed a roller-coaster week that saw the S&P 500 swing up or down more than 2.5% for four days straight.

The massive sell-off could trigger key market circuit breakers during regular trading hours. If the S&P 500 drops 7%, trading will pause for 15 minutes.

UPDATE: Trading has been paused by the circuit breakers.

While Monday’s drop is poised to be significant, it still wouldn’t crack the 20 worst days in the S&P 500.

It’s early. Anything can happen.

Investors continued to seek safer assets amid additional fears that the coronavirus will disrupt global supply chains and tip the economy into a recession. The yield on the benchmark 10-year Treasury note dropped below 0.5% for the first time ever, while the 30-year rate breached 1%.

Saudi Arabia on Saturday slashed official crude selling prices for April, in a sudden U-turn from previous attempts to support the oil market as the coronavirus hammers global demand. The move came after OPEC talks collapsed Friday, prompting some strategists to see oil prices crater to $20 this year.

“Crude has become a bigger problem for markets than the coronavirus,” Adam Crisafulli, founder of Vital Knowledge, said Sunday. “It will be virtually impossible for the [S&P 500] to sustainably bounce if Brent continues to crater,” he added.

Bank stocks are getting smashed as lower yields put pressure on their margins, while an oil crash could cause energy companies to default on their obligations. JPMorgan plunged 9.3% in premarket trading.

The rout took the S&P 500’s loss from its Feb. 19 record toward 20%, threatening to end the record-long bull market that began 11 years ago to the day. NYSE circuit breakers will halt trading for 15 minutes if the equity benchmark falls 7%, a move designed to limit panic that was last triggered during the 2008 financial crisis.

In a dramatic day across assets globally: 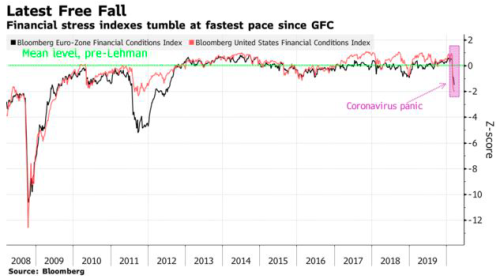 The oil-price crash, if sustained, would upend politics and budgets around the world, exacerbate strains in high-yield credit and add pressure on central bankers trying to avert a recession.

“It is pretty nuts right now,” said Amy Wu Silverman, equity derivatives strategist at RBC Capital Markets, in an email Monday. “It feels like ‘07-’08 when every weekend it felt like the bottom was falling out.”

Peter Coy at Bloomberg News writs, The U.S. May Already Be in a Recession:

Let’s just say it: The longest economic expansion in U.S. history may already be over, killed by Covid-19.

It might seem crazy to talk about a recession when jobs are plentiful. Today the Bureau of Labor Statistics announced a decline in the February unemployment rate to 3.5%, tying a 50-year low.

But a recession isn’t when things are bad. It’s when they aren’t quite as good as they were at the peak. (Conversely, an “expansion” begins when the economy hits bottom and starts back up.)

When economic historians look back, they may pick February as the peak of the expansion that began in June 2009. That would give it a longevity of 128 months, the longest in records maintained by the National Bureau of Economic Research going back to 1854.

This wouldn’t be the first time the U.S. was in a recession without knowing it. In the summer of 2008 policymakers of the Federal Reserve were still predicting decent economic growth for that year and the next—even though a recession had begun the previous December, as later determined by the business cycle dating committee of the National Bureau of Economic Research.

New research from State Street Associates and Massachusetts Institute of Technology indicates that the U.S. economy was vulnerable to a recession even before Covid-19 struck. In January the chance of recession over the next six months was about 70%, even though the stock market was then up about 22% over the previous year, it says.

The stock market’s sharp decline since January damages growth by making households feel poorer and businesses more pessimistic. The chance of a recession with stock prices where they were this week is around 75%, according to Will Kinlaw, a senior managing director and head of Cambridge, Mass.-based State Street Associates, the research unit of financial giant State Street Corp. If stocks give up all of their gains over the past 12 months, Kinlaw says, the likelihood of a recession will grow to 80%.

Covid-19 hit an economy that was less robust than it might have appeared. Nonfarm payroll employment was up 1.4% in January from a year earlier, which is OK. But industrial production was down 0.8% in January from a year earlier. And the Treasury yield curve was perilously close to inversion in January. (Inversion of the yield curve—in which long-term interest rates are lower than short-term ones—is a strong indicator of recession.)

The only strong indicator in January was the stock market, and now, thanks to the coronavirus, that indicator is flashing red as well.

While few economists have said the economy may already be in recession, some are beginning to say one is probably imminent. Mark Zandi, chief economist of Moody’s Analytics, says the chance of a recession this year is at least 50%.

In the financial markets, in contrast, recession talk is rampant. “This is what the start of a recession after a long bull market feels like,” John McClain, a portfolio manager at Diamond Hill Capital Management, told Bloomberg News today. “This is the first day of seeing some panic in the market.”

Kissing is frowned upon in the age of the coronavirus, but you might want to think about kissing goodbye to the longest economic expansion in U.S. history.

Unlike the 2008 financial crisis when there were still “adults in the room” who understood what needed to be done to prevent the financial system from imploding on itself, we now have a mentally and emotionally incompetent president surrounded by intellectually incompetent sycophant enablers who are not up to the job. There are no adults in the room this time. We are in trouble.

The benchmark S&P 500 plummeted as much as 8% on Monday, its biggest intraday drop since 2010, before closing 7.6% lower. The index’s sharp losses at the open prompted the first marketwide trading halt since the depths of the financial crisis in December 2008.

The negative open extended the stock-market sell-off into its third week. Equities tanked for seven days in a row to close out February as fears about the coronavirus outbreak’s economic toll caught up with stocks’ lofty valuations. Risk assets recovered in March’s first trading session before intense price swings saw the market close Friday having erased nearly all month-to-date gains.

The three major US indexes declined as investors digested the weekend’s oil-market turmoil. The commodity tanked the most since 1991 on Monday morning after Saudi Arabia’s surprise price cuts kicked off a production war with Russia. The move followed Russia’s refusal on Friday to curb oil production and prop up the coronavirus-rattled market.

Central banks around the world have issued emergency stimulus to counteract an economic hit caused by the outbreak. Though the Federal Reserve cut its benchmark interest rate by 50 basis points on March 3, Wall Street now expects the central bank to push its rate to 0% to further protect from a virus-fueled contraction.