Yesterday morning, “President Trump said he would not sign a carefully crafted GOP bill addressing the predicament of Dreamers, news that caught House Republicans by surprise and left the legislation on life support.” Trump crushes hopes for compromise DACA plan. “I’m looking at both of them,” Trump told “Fox & Friends” aka “Trump TV” in an interview Friday morning from the White House lawn. “I certainly wouldn’t sign the more moderate one.”

The White House said Friday that President Trump supports House legislation that closely tracks his priorities on border security and limiting legal immigration, walking back comments he made on national television rejecting the GOP bill.

The reversal came after hours of confusion on Capitol Hill, where Trump’s words roiled an already fragile internal debate between conservative and moderate House Republicans who have been trying to find an immigration compromise after months of false starts.

Shah said Trump, during his “Fox and Friends” interview, was referring to an effort led by moderate House Republicans to force a series of immigration votes over the objections of the GOP leadership. Another senior White House official said Trump misunderstood the question that was posed to him, which prompted the president to say that he “certainly wouldn’t sign the more moderate one.”

“The draft compromise bill released Thursday was written with White House input, including from top Trump [white nationalist] adviser Stephen Miller, and closely hews to the “four pillars” the administration set out in a January framework.” Alex Nowrasteh, the senior immigration policy analyst at the Cato Institute, says The DACA ‘compromise’ bill is the worst immigration legislation in a century. The Goodlatte-McSally bill is even worse.

It has to be noted that Trump used his interview on Trump TV and the impromptu press gaggle afterwards to shamelessly spew a shit-pile of lies about his zero tolerance border policy separating children from their parents announced by Attorney General Jeff Sessions on April 6, 2018. 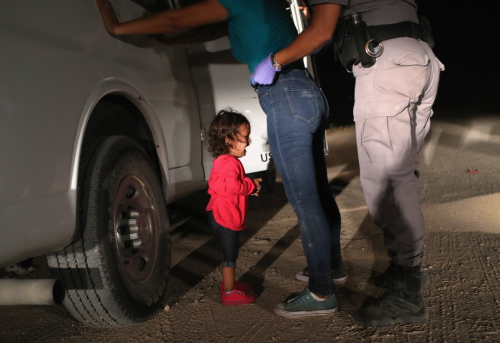 Trump and his evil GOP bastards in Congress have taken to claiming his child separation policy is because of a law passed by Democrats. This is a bald-faced lie that all Republicans are repeating as a talking point, and which has repeatedly been debunked. Five whoppers from President Trump’s impromptu news conference:

“I hate the children being taken away. The Democrats have to change their law. That’s their law.”

This is false. As part of its border crackdown, the Trump administration is separating undocumented immigrant children from their parents largely due to a “zero tolerance” policy implemented by Attorney General Jeff Sessions. No law requires these separations. The government must release rather than detain immigrant children under a 1997 federal consent decree and a bipartisan human-trafficking law from 2008. But neither of these requires family separations.

Philip Bump of the Washington Post explains, Why the Trump administration bears the blame for separating children from their families at the border:

“I hate the children being taken away,” he said. “The Democrats have to change their law. That’s their law.”

This has been debunked repeatedly, including by The Washington Post. There is no “Democrats’ law” that necessitates separating children from their parents. As people familiar with the rules regarding the handling of young people at the border made clear in interviews on Friday, the separation policy is a function of decisions made by Trump and his team. What’s more, the administration specifically implemented the policy to serve as a deterrent for those thinking about seeking entry to the United States.

Wendy Young is the president of Kids in Need of Defense, a nonprofit organization that provides immigrant children with pro bono legal support and that has criticized Trump’s immigration policies.

When we spoke to Young in May, though, she noted that the Trump administration policy was effectively creating unaccompanied minors by separating arriving children from their parents.

Hiroshi Motomura, Susan Westerberg Prager Professor of Law at the University of California at Los Angeles, explained by phone that those separations stem from a change in the treatment of the adults.

“The key shift here is to go to criminal prosecution of the parents that are caught, combined with the practice of not releasing them,” Motomura said. “So if they release them on bond of something like this, that would not require the separation.

”For a family, being released on bond allows parents and children to stay together. If no bond is granted, the child is separated from a parent because the parent goes into criminal detention. Because Flores means that children can’t be detained in such facilities, the Trump administration has argued that Flores necessitates that children and parents be separated.

Flores “doesn’t come close to saying what the administration says it says,” Motomura said. There have always been some criminal prosecutions for people who are crossing the border illegally, he added. “I just never heard that this resulted in a blanket policy of family separation in this way.”

“The reality is, even though theoretically they have the authority to do that, through the immigration laws, to prosecute the parent, in the past that was truly the exception to the rule,” Young said. “The administration stating that they’re required to do this law flies in the face of a long-standing history of treating families like families and recognizing that the children, whether attached to a family or arriving unaccompanied, have particular vulnerabilities that need to be addressed.”

Motomura also noted that key administration officials have themselves argued that the separation policy is meant to be a deterrent. That is, by mandating that children be taken away from parents upon arriving at the border, the hope is that fewer parents will even try to enter the United States. (So far, there doesn’t appear to be a deterrent effect.)

Neither Young nor Motomura indicated that policies advanced by Democratic lawmakers played a role in the new administration policy.

“They are imploding the system themselves,” she said. “It doesn’t have to happen.”

The government said on Friday that 1,995 children were separated from 1,940 adults at the U.S.-Mexico border between April 19 and May 31, as the Trump administration implements stricter border enforcement policies. U.S. government says nearly 2,000 child separations at Mexico border in under two months.

President Trump doesn’t hate that children are being taken away. This immoral man has zero empathy and compassion. He is cruelly using these children as hostages to get an immigration bill that funds his “big beautiful wall” on the Mexican border — you know, the one he falsely claimed that Mexico would pay for. Trump cites as a negotiating tool his policy of separating immigrant children from their parents:

President Trump has calculated that he will gain political leverage in congressional negotiations by continuing to enforce a policy he [falsely] claims to hate — separating immigrant parents from their young children at the southern border, according to White House officials.

On Friday, Trump suggested he would not change the policy unless Democrats agreed to his other [extortionary] immigration demands, which include funding a border wall, tightening the rules for border enforcement and curbing legal entry. He also is intent on pushing members of his party to vote for a compromise measure that would achieve those long-standing priorities.

Trump’s public acknowledgment that he was willing to let the policy continue as he pursued his political goals came as the president once again [falsely] blamed Democrats for a policy enacted and touted by his own administration.

The attempt to gain advantage from a practice the American Academy of Pediatrics describes as causing children “irreparable harm” sets up a high-stakes gambit for Trump, whose political career has long benefited from harsh rhetoric on immigration.

As James A. Coan, a psychology professor at the University of Virginia says, The Trump administration is committing violence against children. This is child abuse, and a violation of their human rights. UN calls on U.S. to stop separating migrant families:

The U.N. human rights office is calling on the Trump administration to “immediately halt” its policy of separating children from their parents after crossing U.S. border with Mexico.

Rights office spokeswoman Ravina Shamdasani scolded the U.S. for its “zero tolerance” policy in which some families have been separated after migration across the border.

The rights office said in a statement that “children should never be detained for reasons related to their own or their parents’ migration status. Detention is never in the best interests of the child and always constitutes a child rights violation.”

Shamdasani told a U.N. briefing Tuesday that the practice of separating families amounted to an “arbitrary and unlawful” interference in family life, calling it a “serious violation” of the rights of children.

The New York Daily News editorializes today, as should every newspaper in the country, Lying coward Trump: Administration separates children from their parents at the border, and he won’t even own up to his cruelty:

The only thing worse than the nauseating cruelty of President Trump’s immigration policy — captured perfectly by the agonizing stories of young children forcefully being separated from their parents at the border — is the craven dishonesty with which he attempts to sell it to the American people.

In January, Trump told a bipartisan group of House and Senate leaders that he’d sign any policy they put together to save from deportation the hundreds of thousands of undocumented “Dreamers” brought to the United States as minors. Watch it again on C-Span: He said he wanted a “bill of love.”

In subsequent weeks, Trump reneged — rejecting the bipartisan Deferred Action for Childhood Arrivals plan senators returned to the White House while insisting on increasingly restrictionist language on legal immigration. After moving the goalposts and paying off the refs, he then blamed Democrats for refusing to play ball.

That cynical deceitfulness has now metastasized. Friday, of a policy that has separated 2,000 children from their parents, Trump said, “I hate the children being taken away. The Democrats have to change their law. That’s their law.”

In March 2017, then-Secretary of Homeland Security John Kelly said he was considering expanding family separation. Last month, Attorney General Jeff Sessions vowed, “If you don’t want your child to be separated, then don’t bring them across the border illegally.”

But wait, there’s more. This week, House GOP leaders — facing a rebellion from moderates trying to force a DACA vote via a parliamentary device — announced that they would bring two bills for a vote. The White House previously indicated support for the more moderate option, which includes $25 billion for Trump’s wall, a path to legalization for Dreamers and supposedly ends family separation.

Friday, Trump flipped, saying he wouldn’t sign it, then flipped again. Given the track record, why believe anything this President says?