Last Friday, Donald Trump returned to his magical thinking about the COVID-19 pandemic from February when he said that the virus would just go away:

Feb. 10: “Now, the virus that we’re talking about having to do — you know, a lot of people think that goes away in April with the heat — as the heat comes in. Typically, that will go away in April. We’re in great shape though. We have 12 cases — 11 cases, and many of them are in good shape now.” — Trump at the White House.

Feb. 27: “It’s going to disappear. One day — it’s like a miracle — it will disappear.” — Trump at a White House meeting with African American leaders.

On May 8, with tens of thousands of Americans having already died, and many more who will die, Trump said the coronavirus will disappear without a vaccine. Fauci has said the opposite.

Trump offered his new comments about the potential vaccine Friday afternoon at the White House.

“I feel about vaccines like I feel about tests: This is going to go away without a vaccine,” Trump said.

“It’s going to go away, and we’re not going to see it again, hopefully, after a period of time.”

Trump said that there could be “flare-ups,” including in the fall, but that it would go away regardless.

“There are some viruses or flus that came and they went for a vaccine, and they never found the vaccine,” Trump said. “And they’ve disappeared. They never showed up again. They die, too, like everything else.”

Pressed on the claim, he doubled down.

Virtually every epidemiologist in the world will tell you that the only way to get the COVID-19 pandemic under control until there is a vaccine is to “test, trace, isolate, treat.” But yesterday, Trump revealingly said Coronavirus testing may be ‘overrated’ and reason for high U.S. case count:

President Donald Trump on Thursday said testing for coronavirus might be “overrated,” revisiting his concern early in the outbreak that testing for the disease would raise the nation’s case count.

“America has now conducted its 10 millionth test. That’s as of yesterday afternoon. Ten million tests we gave. Ten million,” Trump said from a stage at the warehouse event, which had the trappings of a campaign-style rally. “And CVS has just committed to establish up to 1,000 new coronavirus testing sites by the end of this month, and the 10 millionth will go up very, very rapidly.”

“And don’t forget, we have more cases than anybody in the world,” he added. “But why? Because we do more testing. When you test, you have a case. When you test, you find something is wrong with people. If we didn’t do any testing, we would have very few cases.”

Trump said the news media had refused to report his “common sense” explanation for the country’s high case numbers. He repeated the misleading claim that the U.S. has tested more people than other countries, sidestepping the reality that testing as a share of the population is lower than in other countries.

Note: Other countries, e.g., South Korea, Thailand and New Zealand, for example, employed “common sense” by doing a wide scale program of “test, trace, isolate, treat” at the first early signs of an outbreak when it is most effective. They did not waste many weeks denying that there there was a problem or that the virus would magically go away, allowing the virus to spread exponentially throughout the population.

The U.S. still does not have an aggressive testing policy, nor the capacity to do it. On Monday, Trump said the US is conducting about 300,000 tests per day. The Harvard Global Health Institute said the US should be testing at least 900,000 people a day by May 15. Trump says the US leads the world in testing. But it’s far behind in testing per capita, studies show. And Why Is There A Coronavirus Test Shortage? One Reason: We Don’t Have Enough Swabs.

Trump was roundly mocked on his favorite patform, Twitter. A sampling: 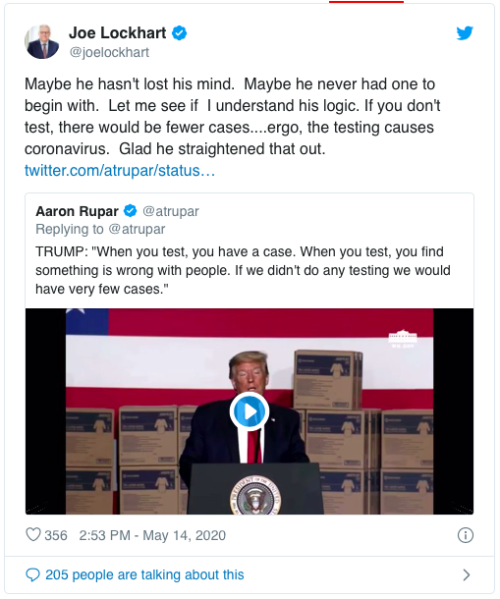 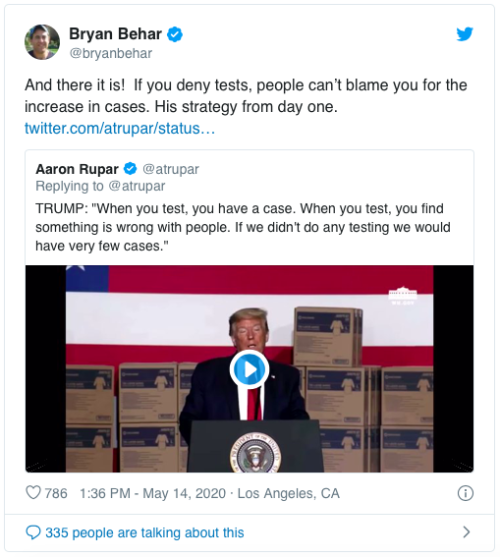 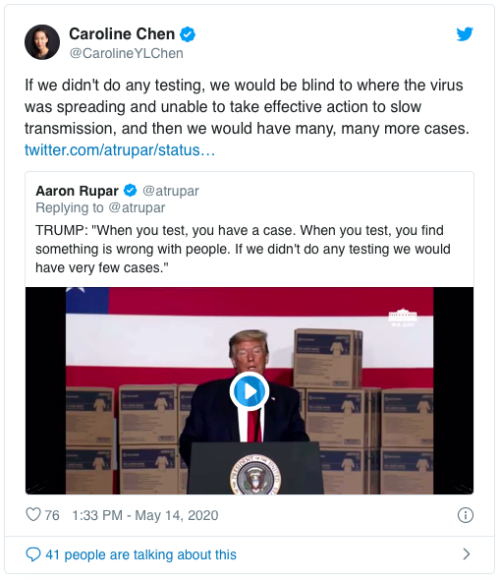 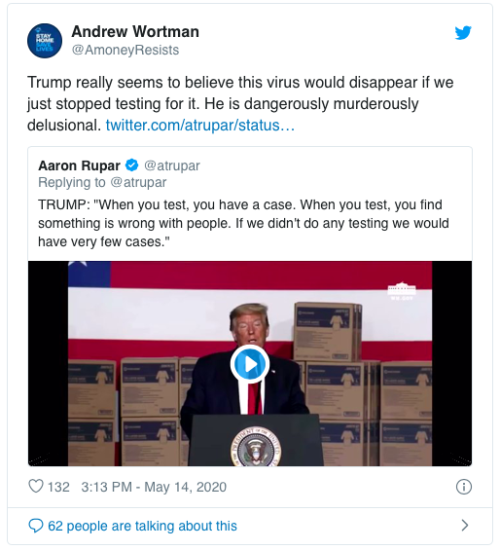 And by the way, that Abbott Labs test hailed by Trump in the video above? Abbott coronavirus test misses a large number of positive results caught by a rival firm, preliminary study says:

The Abbott coronavirus test hailed by President Trump and used by the White House failed to detect infected samples in a large number of cases that were caught by a rival firm, a preliminary study has found.

The speedy Abbott test, which is supposed to determine in five to 13 minutes whether a person has the virus, missed a third of the positive samples found by the diagnostic company Cepheid when both tests used nasopharyngeal swabs, according to the study done by a group from New York University. It missed more than 48 percent of cases when dry nasal swabs were run on Abbott machines, compared to nasopharyngeal swabs run on the Cepheid testing platform. Nasopharyngeal swabs penetrate deeply into the nasal passages, while dry nasal swabs are less invasive.

The study, while preliminary and not yet peer-reviewed, raised questions about a test that has been praised by Trump, who displayed it at a news conference in the Rose Garden on April 2 and said it created “a whole new ballgame.”

Maybe this explains Trump’s surprise last week when Vice President Pence’s press aid Katie Miller tested positive, when she had tested negative the day before: “She’s a wonderful young woman, Katie, she tested very good for a long period of time” … “And then all of the sudden today she tested positive.” WTF?

My theory for the reason that Trump continuously dismisses the severity and danger of COVID-19 is because he has contracted it but is asymptomatic. “What’s the big deal? I feel fine.” Maybe Trump is the reason why everyone in the White House and in the Secret Service have been testing positive in recent weeks — Trump is the asymptomatic super-spreader wandering around without a mask or social distancing spreading the virus. We’ll never know the truth because this is the most dishonest, least transparent administration in history.

Who is responsible for this clusterfuck of a coronavirus response from the White House? You guessed it, Trump princeling Jared Kushner. The Daily Beast has a summary of a Financial Times report (subscriber content), Trump Feared Testing Too Many People for Virus Would Spook Stock Markets, Says Report:

President Trump was wary of making preparations for the coronavirus pandemic because he was concerned doing so would sent the stock market into a panic, the Financial Times reports. In a quote attributed to an unnamed Trump confidant who is said to speak to the president frequently, it’s claimed: “Jared [Kushner] had been arguing that testing too many people, or ordering too many ventilators, would spook the markets and so we just shouldn’t do it… That advice worked far more powerfully on [Trump] than what the scientists were saying. He thinks they always exaggerate.” Elsewhere in the FT investigation into Trump’s handling of the coronavirus pandemic, an unnamed administration official is reported to have told the paper that trying to advise the president is like “bringing fruits to the volcano… You’re trying to appease a great force that’s impervious to reason.”

How did that worked out for you, boy genius? This privileged punk belongs in prison alongside his father for his criminal negligence.

This pair of grossly incompetent grifters and con men go around gaslighting Americans that their response to the COVID-19 pandemic has been a “great success” as the Trump body count soars daily, and they demand that they receive credit for their coronavirus response, because we have not (yet) reached their false metric of 2.2 million dead (an early estimate), so in Trump doublespeak this translates into “I have saved lives.” No, these people just haven’t died yet, give it time. And Trump doesn’t want to count the dead so that he never officially gets to his false metric.

Trump and Kushner are responsible for the Trump death cult, and 86,000 confirmed deaths as of this morning, and still climbing. Trump lied, people died. Hold him accountable.

It’s becoming more and more obvious that President Donald Trump has simply stopped dealing with the coronavirus pandemic, and has no particular plan for confronting its economic fallout, either. In both cases, he’s pretty much substituted wishful thinking for action. The Atlantic’s David Graham had a good item about this disengagement earlier in the week, followed by one from Ezra Klein arguing that “the White House does not have a plan, it does not have a framework, it does not have a philosophy, and it does not have a goal.”