Donald Trump’s impeachment lawyers took this to heart on Friday, pounding the table and yelling like hell because they were in the unenviable position of having to defend the indefensible. As the Washington Post editorializes, Trump’s lawyers had no defense because there is none.

Donald Trump’s impeachment lawyers were as dishonest as their despicable client, adopting his technique of deny, deflect and distract. For the Defense: Twisted Facts and Other Staples of the Trump Playbook. They presented no exculpatory evidence or any mitigating circumstances to excuse their client’s guilt.

Dana Milbank writes, On a bed of lies and rage, Trump’s defense rests.

1) Trump’s team argued that his Jan. 6 speech inciting the insurrection was constitutionally protected and therefore not subject to an impeachment proceeding.

When the violence was in progress, he allowed it to continue for hours, ignoring entreaties that he call off the mob. Even if his exhortations were protected speech, they — along with the rest of his misconduct — are impeachable.

2) Trump’s team aired video showing numerous Democrats using the word “fight” in all kinds of contexts (which were almost never included). That was supposed to show Trump’s use of the word while inciting the insurrection was somehow analogous. [False equivalency]. 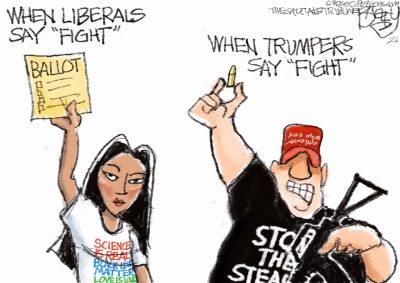 That’s also absurd: Trump’s efforts actually did incite the violent assault on the Capitol. Many rioters have confirmed this in their own words. As two researchers who closely examined the motives of the rioters recently concluded in the Atlantic:

The overwhelming reason for action, cited again and again in court documents, was that arrestees were following Trump’s orders to keep Congress from certifying Joe Biden as the presidential-election winner.

That completely destroys the false equivalence Trump’s lawyers tried to draw (indeed, the whole point of the equivalence was to erase this glaring problem they face).

Sargent’s colleague at The Post, Phillip Bump, adds A key part of Trump’s impeachment defense was already undercut by his own attorney: If all politicians use “fighting” language, why did only Trump’s supporters act on it?

This is silly: It entirely sidesteps Trump’s well known use of mob-speak (as his own former fixer Michael Cohen has explained) to communicate his intentions while maintaining plausible deniability for them. It also elides just how reckless it was for Trump to drive the enraged mob toward the Capitol, when he surely knew what the result almost certainly would be.

Indeed, Trump himself had gone to great lengths to bring about that result, and Trump’s lawyers sidestepped this, too. He spent weeks telling his supporters (in the form of the stolen-election big lie) that they were the victims of a monstrous injustice that they could only rectify by taking matters into their own hands (they were justified in using “very different rules,” as he put it), or their country would perish.

There is simply no question that Trump knew exactly how this might turn out. Not only that, Trump refused to call off the mob for hours after the violence started, which is strange behavior if he intended it to be peaceful. Which leads to…

4) Trump’s team argued he couldn’t have possibly incited the riot because some of the insurrectionists preplanned the assault. Trump’s lawyers showed a bunch of evidence designed to demonstrate this.

Donald Trump took over the planning for the rally, turned it into a march on the Capitol, and surreptitiously paid for many of the domestic terrorist groups to attend as his own personal paramilitary force. See, New York Times Exposé of Donald Trump’s Seditious Conspiracy For A Coup. His lawyers failed to address Trump’s hands-on role in the planning and financing of this attempted coup.

But it’s an absurd argument. It entirely erases from the story all of the public statements Trump made in the run-up to Jan. 6th.

The entire “Stop the Steal” movement, which culminated in Trump supporters from all over the country converging on the Capitol — leading to the assault — was relentlessly promoted by Trump’s propagandists and supporters, including Trump himself.

The last argument is particularly troubling. It shows Trump’s team feels no obligation to engage in any remotely serious way with the mountains of evidence that have piled up from the weeks leading up to the attack. Instead, they just keep robotically repeating that the speech on Jan. 6 alone couldn’t have possibly incited the attack. All those weeks are simply being erased [down the memory hole].

Yet despite the obvious hollowness of such arguments, virtually all GOP senators, perhaps with at most a few exceptions, will vote to acquit him. That they will not be even remotely troubled by the utter failure to engage with that entire backstory only confirms how firmly the fix is in.

The fact checkers were brutal on Team Trump’s mendacity.

More from The Post: Trump attorneys falsely claim he was denied ‘due process’.

Trump’s lawyers are looking at bar disciplinary proceedings for lack of candor to the tribunal. Rule 3.3: Candor Toward the Tribunal. Even defense lawyers can’t just lie.

Then there is this emerging story line from new evidence that Donald Trump set his violent mob on the Capitol to hunt down his own Vice President and to “hang Mike Pence!” from a gallows they erected. Trump was indifferent to the health and safety of his Vice President and his family, because he did not do what Trump had demanded of him, and Trump further inflamed his violent mob with his tweet after he knew that Mike Pence was in danger. The impeachment managers even had video of the rioters reading out Trump’s tweet the rioters before they went hunting for mike Pence – a direct through line of incitement.

CNN reports that Trump refused to call off the Capitol attack when House Republicans asked for help. pic.twitter.com/9uByBPqaW7

McCarthy called Trump pleading for him to stop the rioters.

I’ve spoken to multiple Republican members at the House who have knowledge of that call, who tell us that after Trump tried to say to Kevin these are not my people, it’s Antifa, Kevin McCarthy said to Trump no, it’s not Antifa these are your people.

After he said that Trump said to Mccarthy, quote, “Well, Kevin, I guess these people are more upset about the election than you are.”

House Republicans also described Trump as happy and facilitating the Capitol attack by failing to act.

House Republicans are going on the record and describing Trump and giddy and happy about the Capitol attack. They say that Trump knew what the rioters were doing and he supported them. pic.twitter.com/R93yDkM0B3

“This proves that the president knew very early on what the mob was doing and he knew members were at risk and he refused to act. It’s a violation of his oath of office to fail to come to the defense of congress and the constitutional process immediately. This shows that Trump knew what the rioters were doing, that he supported it, and that he facilitated it by failing to act.”

Sources close to former Vice President Pence said that Trump’s impeachment lawyers were lying when they said that Trump didn’t know that Pence was in danger during the Capitol attack.

People close to Mike Pence say Trump's lawyers lied at the impeachment trial when they claimed that Trump didn't know that Pence was in danger during the Capitol attack, according to @Acosta pic.twitter.com/QPQObtFzOL

That was a moment that stood out for a lot of people when Michael van Der Veen said during this impeachment trial today that at no point did Donald Trump know Mike pence was in danger on January 6th when he was rushed out of the danger by Secret Service, that’s not the case. We know that’s not the case.

I talked with a close source to the president that said that is not the case or that is not true. When I asked whether or not Michael van Der Veen was lying when he said that during this trial, this source close to the vice president said yes. Now, I will tell you, Anderson, aides to the former vice president are fuming over President Trump’s actions that day. They believe he did not do enough to make sure that vice president pence and his family were safe as they were essentially being rushed from danger on that day and it sounds as though because of what Michael van Der Veen said, there are lingering hard feelings and maybe some of those are hardening tonight.

So Donald Trump set his paramilitary force of domestic terrorists on his own Vice President because he did not do as he demanded, and if Pence and his family were killed as a result, Trump’s response would have been “Meh, shit happens.” If Trump’s violent mob had arrived in the Senate and House chambers just minutes earlier, they would have used those gallows to hang Pence and members of Congress as well. American democracy would have died that day.

Are the craven coward Republicans in the Senate even thinking about this reality? Or their duty to defend the Constitution and American democracy?

Of course, the Party of Trump sees violence as a means of maintaining their minority control over the majority of the country. A ‘Scary’ Survey Finding: 4 In 10 Republicans Say Political Violence May Be Necessary. It is true that Republicans have always condoned Trump’s violence. As Lisa Lerer writes at the New York Times, “Whether or not Mr. Trump is convicted, the extremism that flourished under his administration is embedded in our politics.” Donald Trump’s Impeachment Legacy: Violent Extremism. Some of these Republican senators with ambitions to become president may want to harness Trump’s paramilitary forces of domestic terrorists to advance their own ambition. Trump’s failed coup attempt was a training exercise for the next coup attempt, which may succeed in ending the American experiment in democracy.

As Dana Milbank writes, If Republican senators acquit Trump, they will own the violence that follows. They will be forever tethered to a seditious insurrectionist criminal president.

And then the District of Columbia and federal prosecutors need to build their case for a criminal indictment and prosecution.