The Washington Post today offered this brief analysis, Violent Minneapolis protests give Trump a chance to be the law-and-order candidate he ran as in 2016 (excerpt):

Trump described himself as the “law and order” candidate four times as he accepted the Republican presidential nomination at his adopted party’s convention in Cleveland in 2016. The speech came a few weeks after a gunman killed five Dallas law enforcement officers at the end of a vigil to honor two black men who had been fatally shot by police in Louisiana and Minnesota.

Advisers said at the time that Trump’s language was intended as an homage to Nixon, who ran very successfully on the law-and-order message during that tumultuous year of 1968, which included the assassinations of Martin Luther King Jr. and Robert F. Kennedy. The violence during the Democratic convention in Chicago that summer badly hurt Hubert Humphrey, who had become a national star by agitating for the party to include a desegregation plank in their platform during the 1948 convention – as the mayor of Minneapolis. Trump mimicked a lot of Nixonian rhetoric as he pursued the presidency, including the insistence that he, too, spoke for “the silent majority.”

The 73-year-old Trump came of age as a 20-something amid the turbulence of the late 1960s, and he’s always admired the brooding Nixon far more than the amiable Ronald Reagan. With the help of red-baiting Joe McCarthy henchman Roy Cohn, Trump battled a Justice Department lawsuit in the 1970s alleging racial discrimination against tenants in apartment buildings owned by the Trump family. As president, Trump has refused to apologize for the full-page ad he ran in 1989 calling for the reinstatement of the death penalty after the arrests of the Central Park Five and suggested the men might still be guilty, even though they were exonerated years ago.

Speaking to law enforcement officers on Long Island in July 2017, Trump appeared to sanction officers roughing up suspects after arresting them and while putting them into their vehicles. “Please don’t be too nice,” he said.

The difference between Richard Nixon and Donald Trump is that Nixon spoke in racist code language, a wink and a nod that every racist understood what he meant, but not overtly racist language.

Donald Trump has eschewed racist code, he just says it loud and proud using a bullhorn.

Trump’s Twitter feed, which for some inexplicable reason Twitter has not yet shut down, is filled with tweets today that leave little doubt he is now trying to incite violence, if not a race war, to begin in front of the White House tonight.

(You should note that Twitter has not added its warning tag about “glorifying violence” to these tweets today, unlike Friday’s tweet).

It began with a four-part tweet by Trump on Saturday morning, in which he warned protesters away from the White House with a threat of “the most vicious dogs, and most ominous weapons.”

The references to dogs harkens back to racist Sheriff Bull Connor in Birmingham, Alabama. No doubt when Trump saw these images growing up, he and his racist father shared a laugh and said “those uppity niggers got what they deserve!”

It is this next tweet which is garnering even more attention and concern on social media today (except from Jack Dorsey at Twitter).

A not so subtle message to his armed MAGA cult members to show up at the White House tonight to greet George Floyd protestors in an escalation from Nixon’s “hard hats” hippie punching anti-war protestors during the Hard Hat Riots in New York in 1970. 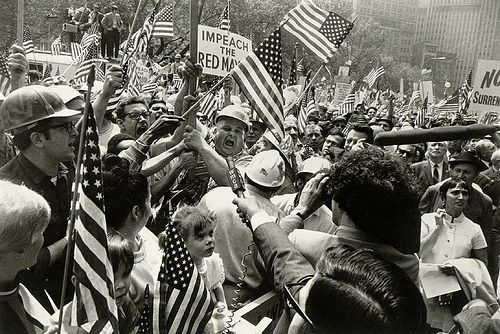 Even more ominous, it may be seen as a signal to his white nationalist supporters who have agitated for violent insurrection — a call to arms for “the boogaloo,” for which many far-right activists have been gearing up and advocating since last year. In Trump’s ‘LIBERATE’ tweets, extremists see a call to arms.

“Boogaloo” is a term used by extremists to refer to armed insurrection, a shortened version of “Civil War 2: Electric Boogaloo,” which was coined on the extremist message board 4chan. 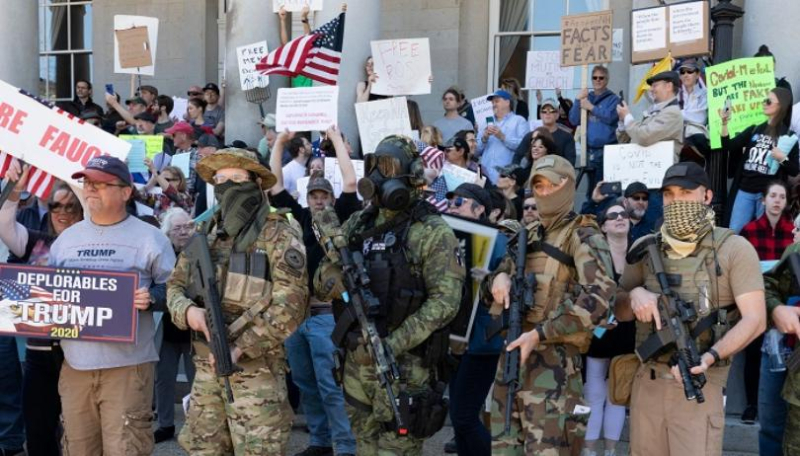 Tom Boggioni writes, Did Trump just signal his MAGA supporters to show up at the White House protests?

A comment Donald Trump made on Twitter has set off massive speculation Saturday morning with many wondering if the president is trying to encourage his fans to show up outside the White House on Saturday evening and confront protesters calling for justice for George Floyd.

In the tweet in question, the president wrote: “The professionally managed so-called ‘protesters’ at the White House had little to do with the memory of George Floyd. They were just there to cause trouble. The @SecretService handled them easily. Tonight, I understand, is MAGA NIGHT AT THE WHITE HOUSE???”

It is unclear what exactly the president is referring to, but many — including a former higher up in the FBI  — speculated that the president is calling for a counter-protest that could lead to even more violence. 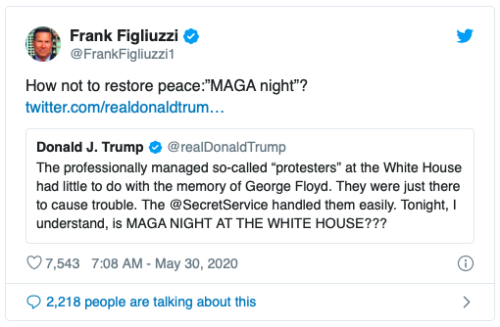 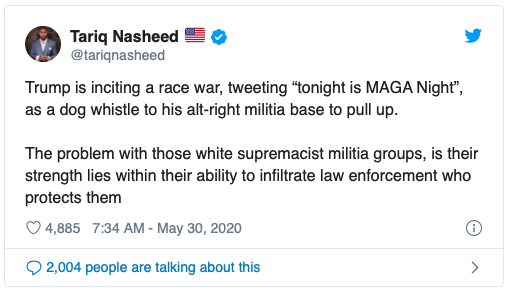 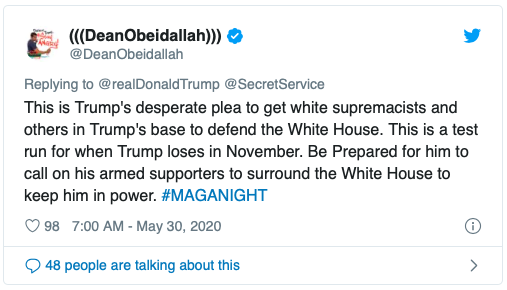 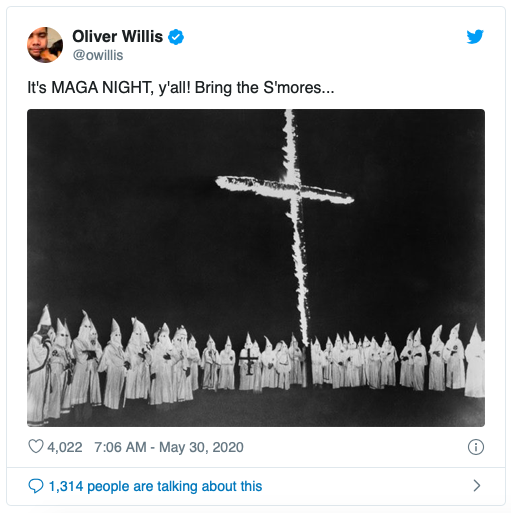 On his way to Florida to witness the SpaceX launch, Donald Trump stopped to talk to reporters where he dismissed a question about the intent of a Saturday morning tweet taken by many to encourage his followers to show up outside the White House on Saturday night and confront George Floyd protesters.

“Mr. President, are you — with your week today, are you concerned you might be stoking more racial violence?” the president was asked.

“No, not at all,” the president replied. “MAGA is ‘Make America Great Again.’ I have no idea if they were going to be here but I was just asking — I have no idea.”

“MAGA is ‘Make America Great Again’” he repeated. “By the way, they love African-American people. They love black people. MAGA loves the black people. I heard that MAGA wanted to be there. A lot of MAGA was going there be there. I have no idea if that’s true or not but they love our country.”

This is a man who likes to play with fire, but he wants to be able to distance himself from the consequences of his actions later: “I have no idea if they were going to be here but I was just asking — I have no idea.” The coward flew off to Florida rather than lead his “troops” at MAGA Night at the White House tonight.

In later tweets, Trump dismissed the George Floyd protestors, claiming that they are the right-wing’s favorite boogeyman, Antifa.  I would hasten to remind people that this country fought a world war to rid the world of fascism. Being anti-fascist is the American way. A crypto-fascist complaining about Americans being anti-fascist is un-American.

The reference to Generals Douglas MacArthur and George Patton are not about World War II, but rather to a violent conflict in Washington, D.C., in 1932, the “Bonus Army War,” an “army” of World War I veterans in Washington demanding payment of the bonus that they were promised but never paid during the Great Depression:

Army Chief of Staff and Major General Douglas MacArthur watched a brigade of steel-helmeted soldiers precisely align themselves in a straight four-column phalanx, bayonets affixed to rifles. He nodded his head in satisfaction. Discipline was wonderful. Up ahead, Major George Patton kicked his heels against his mount, and the big horse reared forward to signal a line of cavalry. The riders drew their sabers, and the animals stepped out in unison, hoofs smacking loudly on the street. Five Renault tanks lurched behind. Seven-ton relics from World War I and presumably just for show, the old machines nonetheless left little doubt as to the seriousness of the moment. On cue, at about 4:30 p.m. on July 28, 1932, the infantry began a slow, steady march forward. Completing the surreal atmosphere, a machine gun unit unlimbered, and its crew busily set up.

Up ahead, a group of weary civilians, many dressed in rags and ill-fitting, faded uniforms, waited in anticipation amid their sorry camp of tents and structures made from clapboard and sheets of tin covered in tar paper. Some loitered in the street. They had heard something was afoot — expected it after what happened earlier. Now, a murmur rose from the camp crowd. Upon seeing the Army’s menacing approach, they were momentarily stunned, disbelieving.

Recovering their senses, a few of the men cursed and sent bottles and bricks flying toward the troops — ineffective weapons against so formidable a force. The missiles shattered on impact on the hard pavement or bounced off the flanks of horses and soldiers. Undaunted, the roughly 600 troops maintained their discipline with tight-lipped determination. The extra training MacArthur had recently ordered was paying off.

Some of the camp inhabitants had already begun running from the oncoming soldiery, but angry packs held their ground, defiantly wielding clubs and iron bars, yelling profanities. An officer signaled, and the infantry halted to don masks and toss gas grenades. Forming into two assault waves, they continued their push. Clouds of stinging, gray fumes wafted through the air, forcing most of the remaining unarmed veterans to flee in panic. One particularly pesky truckload continued to throw debris, prompting a quick response from Patton: ‘Two of us charged at a gallop and [striking with the flat of our swords] had some nice work at close range with the occupants of the truck, most of whom could not sit down for some days.’

As cavalry dispersed a group of outnumbered veterans waving a U.S. flag, a shocked bystander, his face streaked with tears from the gas, accosted MacArthur as he rode along in a staff car. ‘The American flag means nothing to me after this,’ the man yelled. The general quieted him with a stern rebuke, ‘Put that man under arrest if he opens his mouth again.’ The energetic officer was in his element. One reporter observed, ‘General MacArthur, his chest glittering with medals, strode up and down Pennsylvania Avenue, flipping a riding crop against his neatly pressed breeches.’

MacArthur could not help being euphoric. If the tactics were not textbook, the results were everything he hoped for — a complete rout. The troops had exercised perfect restraint in completely clearing the downtown area without firing a shot. Within hours it was all over. Troopers set the abandoned camp ablaze as the former inhabitants retreated, demoralized and beaten, across the Third Street bridge.

It is more than a little disturbing that Trump’s tweets all allude to violent images of conflicts from America’s past, as if he is nostalgic for “the good old days” of such violent conflicts.

Hopefully nothing will come of this in Washington, D.C. or elsewhere this weekend. But if it does, you now know that the president of the United States is inciting violence against his own citizens whom he is sworn to protect, at the hands of a mob of MAGA cult followers.

UPDATE: Mark Sumner at Daily Kos has a good rundown of news reports that “outside agitators,” who appear to be highly organized white protestors, were behind the property damage at protests across the country last night. In Minnesota, those arrested were from out of state and not Minnesota residents. White supremacy groups are hoping to leverage George Floyd’s death into their longed-for ‘race war’.

In his ads, Joe Biden salutes Front Line Heroes who face the Perils of COVID 19 Everyday

Will Knight and Jonathan Mosher react to the Second Chance Initiative...