On Monday, a federal judge ruled more than $14 million should be awarded to a woman who was barraged with anti-Semitic and threatening messages online after a neo-Nazi blogger instructed his followers to target her and her family with a “troll storm.” A Judge Ruled A Neo-Nazi Blogger Should Pay $14 Million To A Woman Targeted In A Racist “Troll Storm”:

The ruling was handed down against Andrew Anglin, a white supremacist and publisher of the website The Daily Stormer. 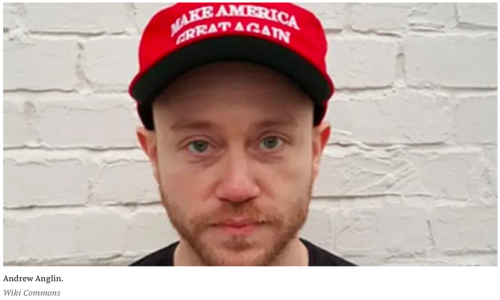 In his decision, judge Jeremiah Lynch found that Anglin “acted with actual malice” when he told followers: “Let’s Hit Em Up. Are y’all ready for an old fashioned Troll Storm? Because AYO – it’s time, fam.”

What followed were a series of racist and sometimes threatening messages to Montana real estate agent Tanya Gersh, her co-workers, and her family, including her 12-year-old son.

The recommended ruling against Anglin included more than $200,000 for lost earnings and medical expenses incurred by Gersh, $821,000 for future lost earnings, and $3 million for past and future pain and suffering.

The bulk of the judgment, however, was the state maximum of $10 million in punitive damages against the white supremacist for what the judge called “particularly egregious and reprehensible” behavior and to “punish Anglin and deter him from engaging in such conduct in the future.”

“The court today made clear that this type of conduct is intolerable in a civil society and that those who would engage in it must pay the price,” David Dinielli, deputy legal director at the Southern Poverty Law Center, who filed the suit on behalf of Gersh, said in a statement. “Even more, this ruling symbolizes a victory for our client, Tanya Gersh, who refused to cower in the face of Anglin’s hate.”

Chief Judge for the District of Montana, Dana Christensen, is expected to make a final judgment on the case and take Lynch’s ruling into consideration.

According to court documents, Anglin posted more than two dozen posts about Gersh, including publishing her contact information in an effort to get his readers to contact her and her family on social media and in person.

“This is the goylash,” read one of the hundreds of messages that were sent to Gersh during the harassment campaign. “You remember the last goylash, don’t you Tanya? Merry Christmas, you Christ killing Jew.”

The $14 million judgment could strike a devastating blow against Anglin, a prominent white supremacist who has aligned with other alt-right and white nationalist figures, and his website.

Which leads me to this. President Trump accuses Rep. Omar of supporting al-Qaeda:

The president accused Rep. Ilhan Omar (D-Minn.) of supporting the terrorist group behind the 9/11 attacks.

Omar, a Somali American and practicing Muslim, was elected to Congress in 2018. She’s a member of “the Squad,” an informal group of liberal Democrats that also includes Reps. Alexandria Ocasio-Cortez (N.Y.), Ayanna Pressley (Mass.) and Rashida Tlaib (Mich.).

Trump lashed out at the foursome in a Twitter statement Sunday, telling them to “go back” to their countries. Asked about those racist comments the next day, Trump alleged that Omar has voiced support for al-Qaeda. “When I think of al-Qaeda, I can hold my chest out,” Trump quoted Omar as saying.

He seemed to be referencing an interview Omar gave in 2013 to a local television show in Minnesota. But Trump completely twisted and falsely characterized Omar’s remarks.

Trump’s accusation, however, is that Omar sympathizes with al-Qaeda terrorists. It’s one thing to criticize U.S. policies and institutions, as Omar does. It’s entirely another thing to voice support for al-Qaeda. We found no evidence for that claim.

At one point, Trump quoted Omar as saying: “When I think of al-Qaeda, I can hold my chest out.”

As CNN noted, Trump appeared to be referring to “an Omar comment that has circulated this year in conservative media, including Fox News aka Trump TV.” It comes from a 2013 interview. Omar was a guest on “BelAhdan,” a Twin Cities PBS show about Middle East issues. She did not voice approval for al-Qaeda and in fact condemned terrorist acts as “evil” and “heinous.”

Omar said the Muslim community at large should not be held accountable for the actions of Islamic terrorists. “I think the general population needs to understand that there is a difference between the people that are carrying on the evil acts — because it is an evil act, and we do have evil people in this world — and then the normal people who carry on, the normal people, regular citizens who carry on their life,” she said.

Omar and the host, Ahmed Tharwat, suggested that radicalization and terrorist strikes are partly a reaction to the United States’ and other world powers’ “involvement in other countries’ affairs.”

After that, the discussion turned to the way some English speakers use or accentuate certain Arabic words for effect, whereas no one accentuates “America” or “England” or “the Army.”

Here’s what Omar said about that:

“I remember when I was in college I took a terrorism class. … We learned the ideology. The thing that was interesting in the class was every time the professor said ‘al-Qaeda,’ he sort of like, his shoulders went up, and you know — ‘al-Qaeda,’ ‘Hezbollah.’ …

Trump twisted these words beyond recognition to make an incendiary claim that Omar supports terrorists. Instead of proudly proclaiming support for al-Qaeda, Omar was recounting how her college professor would arch his shoulders and accentuate the name of the terrorist group for effect.

The White House did not respond to our questions, and the Trump campaign declined to comment.

Trump also pointed to Omar’s remarks at a March event hosted by the Council on American-Islamic Relations (CAIR). Omar arguably minimized the 9/11 terrorist attacks with the phrase “some people did something.”

She said, “CAIR was founded after 9/11 because they recognized that some people did something and that all of us were starting to lose access to our civil liberties.” (CAIR was founded in 1994, not in response to 9/11, as Omar claimed.)

As we found in this fact check, a full look at her 20-minute speech adds necessary context. Her remarks were part of a larger point about anti-Muslim discrimination, and they came after she listed some specific examples.

A longer look at what she said: “For far too long, we have lived with the discomfort of being a second-class citizen and, frankly, I’m tired of it, and every single Muslim in this country should be tired of it. CAIR was founded after 9/11 because they recognized that some people did something and that all of us were starting to lose access to our civil liberties.”

It’s not the first time Trump has launched an evidence-free accusation against Muslims in the United States. When he was a candidate for the Republican presidential nomination in 2015, Trump falsely claimed that television reports had shown “thousands” of Muslims cheering the destruction of the World Trade Center from rooftops in Jersey City.

“No one has been able to unearth any video of any such thing happening,” Chris Christie, who was then New Jersey’s governor, said at the time.

With no evidence, Trump accused a Muslim member of Congress of being an al-Qaeda supporter. He twisted Omar’s words beyond recognition to associate her with terrorists. He earns Four Pinocchios.

But here’s the problem: the people who live in the Epistemic closure of the ‘conservative misinformation feedback loop’ media bubble do not read fact checks, because their “Dear Leader” has told them them it is fake news. So all they know and believe are the lies of their “Dear Leader.”

Trump smears Rep. Ilhan Omar (D-Minn.) with “dezinformatsiya” to stoke Islamophobic bigotry against her on the basis of her faith — because she is a Muslim ipso facto she is a terrorist — something Fox News aka Trump TV has been doing ad naseam since 9/11. His purpose is to stoke fear and hatred among his MAGA cult followers.

Trump’s rhetoric can incite violence against the targets of his incendiary tweets from his more unhinged alt-right white nationalist supporters.

A number of Americans have been murdered since 9/11 simply for appearing to be Muslim to some unhinged religious bigot. One of the first victims of a hate crime after 9/11 was Balbir Singh Sodhi, a Sikh-American gas station owner in Mesa, Arizona. Balbir Singh Sodhi, who wore a beard and a turban in accordance with his Sikh faith, was mistaken for an Arab Muslim and murdered by 42-year-old Frank Silva Roque. Roque had reportedly told friends that he was “going to go out and shoot some towel-heads” the day of the attacks.

The cybersecurity expert noticed that President Trump’s Friday tweet — a video juxtaposing Rep. Ilhan Omar (D-Minn.) with footage of the twin towers falling on 9/11 — had generated a surge of activity from a sector of Twitter users he argues aren’t always taken seriously: the ones who incite violence.

The threatening messages made toward Omar were so severe they prompted House Speaker Nancy Pelosi (D-Calif.) to increase protection for the congresswoman.

I’m sure the death threats against Rep. Ilhan Omar have only increased since this past weekend with Trump’s racist Twitter storm against four Democratic members of Congress.

And let’s not forget that Trump regularly Encouraged Violence at his Nuremberg-style campaign rallies in 2016, and no doubt will do so again. He is playing with fire. Trump has the dangerous ability to unleash a wave of domestic terrorism from his unhinged alt-right white nationalist MAGA cult followers against individuals and minority groups he targets.

Sue his racist ass out of existence.