In November, the Washington Post’s Fact Checker Glenn Kessler commented that Donald “Trump has already earned more Four-Pinocchio ratings than any other candidate this year.” Trump’s outrageous claim that ‘thousands’ of New Jersey celebrated the 9/11 attacks.

Now PolitiFact (yes, I know), gives its much coveted Lie Of The Year Award to Donald Trump, for all of his 2015 campaign misstatements:

It’s the trope on Trump: He’s authentic, a straight-talker, less scripted than traditional politicians. That’s because Donald Trump doesn’t let facts slow him down. Bending the truth or being unhampered by accuracy is a strategy he has followed for years.

PolitiFact has been documenting Trump’s statements on our Truth-O-Meter, where we’ve rated 76 percent of them Mostly False, False or Pants on Fire, out of 77 statements checked. No other politician has as many statements rated so far down on the dial.

In considering our annual Lie of the Year, we found our only real contenders were Trump’s — his various statements also led our Readers’ Poll. But it was hard to single one out from the others. So we have rolled them into one big trophy.

To the candidate who says he’s all about winning, PolitiFact designates the many campaign misstatements of Donald Trump as our 2015 Lie of the Year.

Essentially “The Donald” is a lie machine, insert your quarter and out spews a torrent of lies. Remember, he is the leading candidate in the GOP primary and odds on favorite to win the GOP nomination.

Trump looked at the mendacity of Willard “Mittens” Romney in 2012 (Steve Benen chronicled 917 of Romney’s lies in his series “Chronicling Mitt’s Mendacity” in 2012. Other fact checkers had a banner year for fact checking as well) and said to himself, “What an amateur! What a loser! I am the best, most brilliant, most perfect liar of all time!” And so he is.

The modern-day Republican Party has become the manifestation of the insidious cancer that is the conservative media entertainment complex, the Mighty Wurlitzer of far-right conspiracy theories, paranoia, and conservative tribalism built upon a foundation of ignorance, intolerance, fear and hatred of “others.” It is a fact-free world where truthiness — the quality of stating concepts one wishes or believes to be true, rather than the facts — lives.

With this in mind, this story speaks to the shameless lack of self-awareness of Donald Trump. Trump demands apology from Clinton for calling him ISIS’ best recruiter:

At Saturday night’s debate, Clinton said that Trump is becoming “ISIS’ best recruiter,” a statement experts on the issue generally agree with. According to Rita Katz of the SITE Intelligence Group,  “When [Trump] says, ‘No Muslims should be allowed in America,’ they tell people, ‘We told you America hates Muslims and here is proof.'” But Trump is not taking it. He’s demanding an apology:

Actually Donald, the e-mail story has turned out to be a nothing burger like Benghazi!, as Steve Benen has documented. Latest Clinton email story fits a familiar pattern:

Last week, a pattern began to emerge. Every time there’s a new development in the saga surrounding Hillary Clinton’s email server management, the coverage follows a specific trajectory: (1) the public sees startling, provocative headlines that, at first blush, seem important; (2) pundits reflect on the degree to which the hard-to-identify “scandal” is lingering; (3) the new developments prove to be unimportant.

This pattern actually goes back to the earliest days of the Clinton campaign in 1992, and gave birth to the modern conservative media entertainment complex with a series of heavily hyped non-scandals collectively known as the Whitewater controversy, in which the only scandal that proved to be true was that Bill Clinton lied about an extramarital blow job.

This idea that Hillary Clinton “lies about everything” has been repeated by the the Mighty Wurlitzer of the right-wing noise machine so often that it has become ingrained in the consciousness of Americans who do not know nor care what the facts are (this is known as the big lie technique of propaganda.) 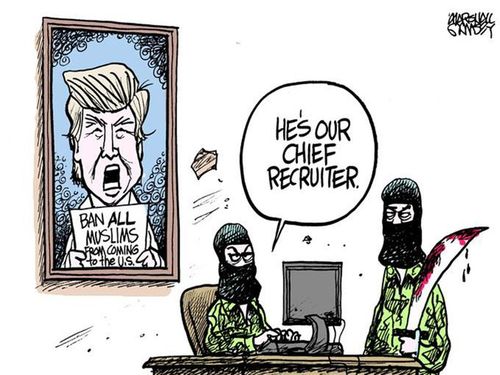 The underlying assumption of PolitiFact appears to be that ISIS has not made a recruitment video (for which they are infamous) using Trump, but that is not what Clinton said. She said that ISIS is “showing videos of Trump.” The fact checkers are looking for the wrong thing.

The Muslim world has access to the Internet, it would be naive and foolish to believe that they have not seen American news coverage of Donald Trump insulting Muslims and calling on banning Muslims. It is more probable than not that when an expert like Rita Katz of the SITE Intelligence Group says  “When [Trump] says, ‘No Muslims should be allowed in America,’ they tell people, ‘We told you America hates Muslims and here is proof,'” that this has occurred. Just because no American reporter has confirmed  having witnessed it — And why would they? They would be taken captive by ISIS — doesn’t mean that it has not happened. It almost certainly has.

The response to Trump from the Clinton campaign is the appropriate response. ‘Hell No’ Hillary Clinton Won’t Apologize to Trump:

A spokesman for Hillary Clinton said that she won’t apologize to Donald Trump for her comments at Saturday night’s debate that he is being used as a recruiting tool for ISIS.

“Hillary Clinton will not be apologizing to Donald Trump for correctly pointing out how his hateful rhetoric only helps ISIS recruit more terrorists,” he said.

“She’s not referring to a specific video, but he is being used in social media by ISIS as propaganda,” Palmieri explained.

As I said, ISIS does not need to make a video when the American news media are doing it for them with their incessant news coverage of every offensive and bigoted comment uttered by Donald Trump.  The news media (and their fact checkers) are conveniently overlooking their own videos.

UPDATE: By the way, last week Ted Koppel said almost exactly the same thing that Hillary Clinton said, and it was barely noticed by the media. Ted Koppel: Donald Trump ‘Is Recruiter-in-Chief For ISIS’:

Ted Koppel made a compelling argument that many in the media are afraid to draw when discussing Trump or ISIS. During this segment of the MTP panel, Koppel said it like it is.

CHUCK TODD: Yeah, you know, Ted, they’re actually very familiar. These are voters that have felt outcasted. Their parents probably felt like outcasts in the ’60s and ’70s during that social upheaval.

That’s what some of this is.

TED KOPPEL: But the irony is they think they’re being tough on ISIS and Trump thinks he’s being tough on ISIS. Senator Rubio in his interview with you touched on it very, very lightly. Donald Trump is, in effect, the Recruiter-in-Chief for ISIS. ISIS wants nothing more right now than to have the world divided into Judeo-Christian on one side and the Islamic world on the other. That’s exactly what Trump is doing for them. I think it’s time we start with thinking about what ISIS wants and then not doing it.