Trump plots to delegitimize the election to explain his defeat

Trump plots to delegitimize the election to explain his defeat

In the modern era, Republicans have always sought to delegitimize Democrats who win the presidency, from claiming that the Democrat “stole” the election (John Kennedy), to “Birthers” claiming that the Democrat was not qualified to be president (Barack Obama). Only Republicans are legitimately elected president, even when they are not (Bush v. Gore). Many Republicans believe that GOP stands for “God’s Own Party” and that God is on their side. Thus, Democrats are illegitimate (and heathen “devils” to boot). Trump calls Hillary Clinton ‘the devil’. 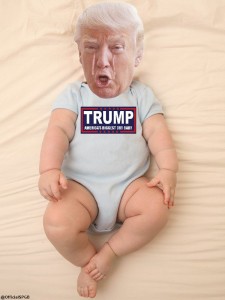 The short-fingered vulgarian Donald Trump has already begun laying the groundwork to explain his pending defeat — after promising his sycophant supporters that he would beat Hillary Clinton “easily” — by claiming that the election will be “rigged.” “I didn’t lose, it was stolen from me!”

It is perhaps not a coincidence that Trump has suddenly stopped tweeting about polls (which are now showing Clinton taking a meaningful lead) at precisely the moment that he is escalating his efforts to cast doubt, in advance, on the legitimacy of the general election’s outcome.

Trump and his supporters have now said in a series of new public remarks that the outcome of the election is likely to be “rigged.” Yesterday, on the campaign trail, Trump said: “I’m afraid the election’s going to be rigged. I have to be honest.”

Meanwhile, longtime Trump confidante [and GOP ratfucker] Roger Stone is explicitly encouraging Trump to make this case to his supporters. “I think we have widespread voter fraud, but the first thing that Trump needs to do is begin talking about it constantly,” Stone told a friendly interviewer, adding that Trump should start saying this: “If there’s voter fraud, this election will be illegitimate, the election of the winner will be illegitimate, we will have a constitutional crisis, widespread civil disobedience, and the government will no longer be the government.”

Stone also said: “I think he’s gotta put them on notice that their inauguration will be a rhetorical, and when I mean civil disobedience, not violence, but it will be a bloodbath.”

This GOP ratfucker is encouraging violence with “bloodbath” while trying to cover his ass by saying that he is not encouraging violence. This is how Roger Stone has operated for years. He is not just delegitimizing the election, but delegitimizing the federal government itself.  This is right-wing dog whistle incitement to revolution. How long will it be before Stone resorts to “Second Amendment remedies”? Oh yes, this GOP ratfucker will go there.

There’s been a lot of chatter on twitter to the effect that Trump is trying to delegitimize his potential loss in the eyes of his supporters. But I think this goes further than that: It’s also about delegitimizing the Hillary Clinton presidency, should she win.

Indeed, it bears recalling the GOP convention itself was to no small degree framed around this idea. The chants of “lock her up” at the convention, which were specifically encouraged and assented to by speakers on the stage, were at bottom about precisely that. Although a variety of investigations have failed to produce evidence of any criminal behavior by Clinton, those egged-on “lock her up” chants are about keeping hope alive, a hope that can be sustained deep into a Clinton presidency, if it comes to that. As Brian Beutler has argued, there’s a direct line from Trump’s birtherism to the “lock her up” chants — both are about denying the fundamental legitimacy of the opposition, in the most recent case in advance of her potential ascension to the presidency.

Now Trump and his top supporters have taken this a step further, explicitly saying that the process by which Clinton will have been elected, should she win, will itself be illegitimate. It is obvious that Trump will only amplify this idea if the polls continue to show that he is probably going to lose, and that Clinton is probably going to prevail.

Given that a sizable bloc of GOP voters is apparently willing to agree with Trump on pretty much everything, it’s plausible that a sizable bloc of them will be open to being convinced that the outcome of the presidential election was illegitimate — and that Clinton, should she win, is not legitimately the president. Trump will presumably have something of a national following after this is all over — one that remains deeply in thrall to Trumpism’s nativism, protectionism, white nationalism, and all-around deranged conspiracy-mongering — and it’s not hard to imagine Trump continuing to speak to that following by castigating President Clinton’s illegitimacy.

Paul Ryan and Mitch McConnell and other GOP leaders should be asked whether they think it is appropriate for Trump to be trying to convince millions of his supporters — millions of Republican voters — that the outcome of the presidential election is shaping up as a potentially illegitimate one.

Riiiight. Even when Barack Obama had an indisputable mandate with a landslide victory in 2008 and super-majorities in both chambers of Congress, what was the Republican response? Senate Minority Leader Mitch McConnell’s Top Priority was to Make Obama a One Term President. On Inauguration Day 2009, GOP conspirators plotted to block any and all legislation proposed by Obama, despite the fact that the country was in the worst economic catastrophe since the Great Depression and fighting two wars. The Republicans’ Plan For The New Pesident – Frontline; 9 Revelations From Robert Draper’s ‘Do Not Ask What Good We Do’.

The GOP is not a political party that feels obligated or constrained by election results, the law or the Constitution. It only cares about the raw exercise of power. This is what makes an authoritarian crypto-fascist like Donald Trump so dangerous.