The “Trump Slump” recession is coming, it is only a question of timing.

Stocks plunged Wednesday in the Dow Jones Industrial Average’s worst performance of 2019 after the bond market flashed a troubling signal about the U.S. economy. 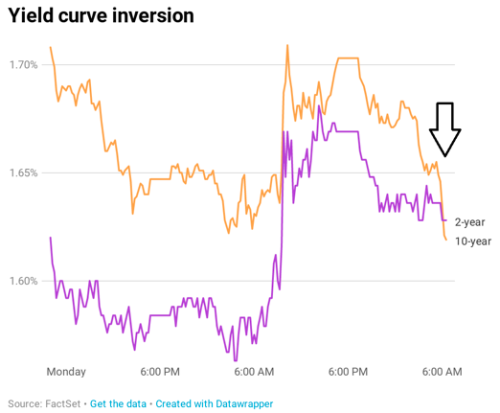 “The U.S. equity market is on borrowed time after the yield curve inverts,” said Bank of America technical strategist Stephen Suttmeier, in a note.

There have been five inversions of the 2-year and 10-year yields since 1978 and all were precursors to a recession, but there is a significant lag, according to data from Credit Suisse. A recession occurred, on average, 22 months after the inversion, Credit Suisse shows. And the S&P 500 actually enjoyed average returns of 15% 18 months after an inversion before it eventually turns.

Still, the signal spooked investors on Wednesday. The last time this key part of the yield curve inverted was during a period starting in December 2005, two years before the recession brought on by the financial crisis hit.

“Historically speaking the inversion of that benchmark yield curve measure means that we now must expect a recession anywhere from six-to-18 months from today which will drastically, and negatively, shift our medium-to-longer term outlook on the broader markets,” Tom Essaye, founder of The Sevens Report, said in a note on Wednesday. 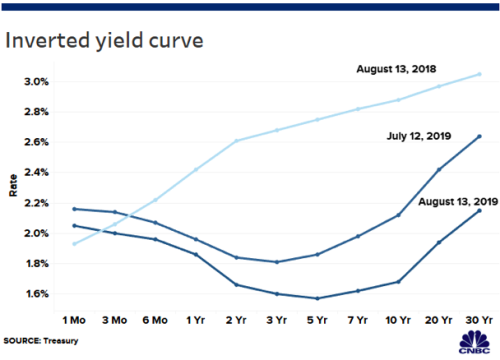 Of course, our Twitter-troll-in-chief is entirely clueless about economics. I guarantee you that he has no idea what an inverted yield curve is or what it means. 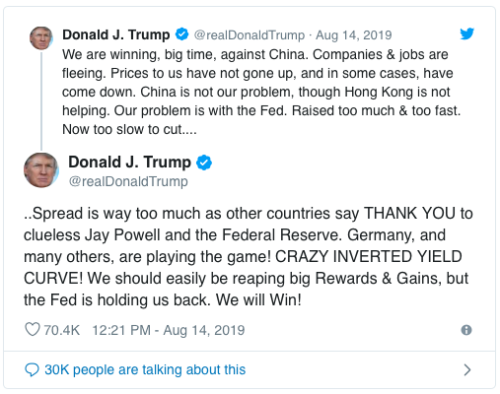 August has been a volatile month for the stock market so far. Including Wednesday, the Dow has moved more than 200 points in either direction on seven occasions. On August 5, the Dow plunged 767 points, or 2.9%. It then recovered some of those losses until Wednesday’s shellacking.

Some of the largest stock market declines of all time have occurred during the Trump administration. 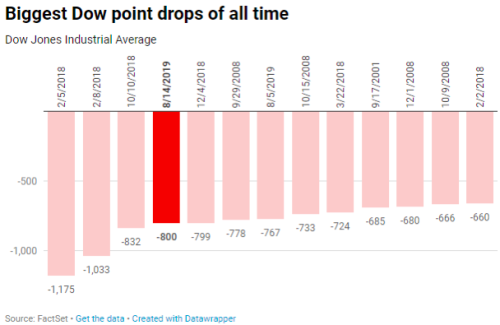 Investors are increasingly worried about a global economic slowdown as weaker-than-expected data in China deepened the gloom in the world’s second-largest economy. Official data published Wednesday showed growth of China’s industrial output slowed to 4.8% in July from a year earlier, the weakest growth in 17 years.

Adding to the fears on Wednesday was Germany’s negative GDP print, which raised the risk that Europe’s largest economy is on the verge of falling into a recession. Euro zone GDP also grew by just 0.2% quarter on quarter, a significant slowdown from the 0.4% growth in the first quarter.

The Washington Post reported that 9 key countries are on the verge of recession, driving fears the U.S. could follow.

So naturally our economics ignoramus Twitter-troll-in-chief has fallen back on his go to move: “It’s all a conspiracy by the “fake news” media. They’re all out to get me!” In Economic Warning Signals, Trump Sees Signs of a Conspiracy:

President Trump, confronting perhaps the most ominous economic signs of his time in office, has unleashed what is by now a familiar response: lashing out at what he believes is a conspiracy of forces arrayed against him.

He has insisted that his own handpicked Federal Reserve chair, Jerome H. Powell, is intentionally acting against him. He has said other countries, including allies, are working to hurt American economic interests. And he has accused the news media of trying to create a recession.

“The Fake News Media is doing everything they can to crash the economy because they think that will be bad for me and my re-election,” Mr. Trump tweeted last week. “The problem they have is that the economy is way too strong and we will soon be winning big on Trade, and everyone knows that, including China!”

Mr. Trump has been agitated in discussions of the economy, and by the news media’s reporting of warnings of a possible recession. He has said forces that do not want him to win have been overstating the damage his trade war has caused, according to people who have spoken with him. And several aides agree with him that the news media is overplaying the economic fears, adding to his feeling of being justified, people close to the president said.

Be forewarned, there are no adults in the room, only a bunch of yes men who will tell the Twitter-troll-in-chief only what he wants to hear in classic “Baghdad Bob” fashion. When the economy goes south, and it will, there are no professionals on the Trump team who know what to do and who will be able to convince Trump to take the steps necessary to lessen the impact of recession.

Catherine Rampell of the Washington Post accurately observes, Trump has a dream team for mismanaging a recession:

If indeed we have a downturn, Trump might or might not be the cause; the exact triggers of recession are often hard to pinpoint. But you know what would unequivocally be his fault, rather than fickle fortune?

If things go south, this administration doesn’t have a plan. It never had a plan. And it doesn’t have competent personnel in place to come up with a plan.

Trump’s economic brain trust consists of a guy who plays an economist on TV, a crank  who has been disowned by the (real) economics profession and the producer of “The Lego Batman Movie.”

For those unfamiliar with this particular dream team, the first person on that list is National Economic Council Director Larry Kudlow, an affable former CNBC personality. Kudlow has one skill that actually could be useful in a crisis: being able to communicate clearly to financial markets. That skill has been rendered moot, however, by Trump’s inability to settle on any consistent message worthy of communicating.

Next is senior White House aide and trade adviser Peter Navarro. When profiled in the New Yorker in 2016, Navarro could not name a single other economist who agreed with his views on trade. More recently, he suggested the Wall Street Journal editorial page sounded communist.

That’s a first, for sure.

And finally, there’s Treasury Secretary Steven Mnuchin. Bankrolling “Suicide Squad” and other movies — whatever their artistic merits — and earning the coveted title of greatest sycophant in Cabinet history bear little relevance to rescuing the world from economic crisis.

Moreover, Mnuchin’s Treasury Department is rife with vacancies. Many senior jobs lack even a nominee. There is likewise no nominee for the Senate-confirmed job of chair of the Council of Economic Advisers. The acting chair is a health expert.

As Rampell observes, “The only competent economic policymakers we have right now are over at the Fed, an institution that Trump is spending all his energy trying to discredit … In other words, regardless of what the Fed does, Trump is eroding its credibility just when we need it most.”

Rampell concludes, “Trump — like the rest of us — had better hope and pray that we don’t have a recession anytime soon. Because if we do, it’s gonna be bad.”

Trump sent his “Baghdad Bob” economic team out on the Sunday morning bobblehead shows this weekend to reassure everyone that this is “the bestest economy evah!” and that there is no reason to be concerned about a coming recession.

Catherine Rampell’s associate at the Washington Post, James Downie picks up the thread from there. The Trump economic team: Men without a plan:

So, faced with the Sunday talk shows, the Trump White House sent out National Economic Council Director Larry Kudlow and trade adviser Peter Navarro. On Friday, my colleague Catherine Rampell described the pair, along with Treasury Secretary Steven Mnuchin, as Trump’s “dream team” of economic mismanagement; on Sunday, they showed why.

On NBC’s “Meet the Press,” host Chuck Todd asked Kudlow to assess Wall Street fears about the economy. “I don’t see a recession,” answered Kudlow. “And let me add just one theme, Chuck. … Let’s not be afraid of optimism.” He cited strong “consumer numbers,” low oil prices and low interest rates and predicted “the economy’s going to be very good in 2019.”

That may sound good. But given that we’re well into 2019, Kudlow’s silence about 2020 is concerning. Furthermore, Kudlow’s confidence has some eerie echoes with the last downturn, as Todd pointed out:

But, you know, you actually said that in 2007 right before the second-worst downturn in American history. This is what you wrote. “There’s no recession coming.” This is in December of ’07. “The pessimistas were wrong. It’s not going to happen. The Bush boom is alive and well. It’s finishing up its sixth consecutive year with more to come.”

Here’s the problem: Kudlow and others failed to see a recession coming because they refused to believe housing and other markets could really collapse. Others learned from that mistake; it seems Kudlow hasn’t.

Critics argue that Kudlow has a notoriously poor record as an economic prognosticator, and that he tends to focus on questions of abolishing taxes at the expense of most other things in his analyses. The adviser promoted this view on Fox News Sunday, claiming the White House is “looking at” a middle-class tax cut, as he brushed aside a question about negative impacts of Trump’s economic policy by praising supply-side economics.

As for Navarro, he was asked on CBS’s “Face the Nation” to explain a presidential contradiction: If tariffs don’t really hurt U.S. consumers, as Trump likes to claim, then why did he delay tariffs until Dec. 15 out of concern for hurting consumers? “I was there in the Oval Office when a group of business people came in and made the following very persuasive argument,” Navarro replied. “They had already bought everything that was going to be on our shelves, but they’d done it in dollar contracts, which means they weren’t able to shift the burden back to the Chinese.”

[I]t’s worth noting that Navarro holds some extremely niche views on how the economy works, and many economists and members of the business community don’t consider his appraisals reliable.

On State of the Union, for example, Navarro maintained — despite being presented with studies that found otherwise — that Trump’s tariffs on Chinese goods are “not hurting anybody here. They’re hurting China.”

But there is in fact plenty of evidence that the US’s tariffs on Chinese goods (border taxes on imports) have cost domestic businesses billions of dollars by forcing them to raise prices for consumers and costing them sales as a result.

Whether another recession is coming is an open question: Strong consumer spending and low unemployment may continue to keep things afloat. But all Navarro’s and Kudlow’s answers offered was more evidence that, if the economy does go south, this administration is acting without thinking. Kudlow is wrong: No one is “afraid of optimism.” We’re afraid of the team in the White House.