For decades, federal prosecutors have been told not to mount election fraud investigations in the final months before an election for fear they could depress voter turnout or erode confidence in the results. Now, the Justice Department has lifted that prohibition weeks before the presidential election.

A Justice Department lawyer in Washington said in a memo to prosecutors last Friday that they could investigate suspicions of election fraud before votes are tabulated. That reversed a decades-long policy that largely forbade aggressively conducting such inquiries during campaigns to keep their existence from becoming public and possibly “chilling legitimate voting and campaign activities” or “interjecting the investigation itself as an issue” for voters.

The memo creates “an exception to the general non-interference with elections policy” for suspicions of election fraud, particularly misconduct by federal government workers, including postal workers or military employees; both groups transport mail-in ballots. The exception allows investigators to take overt investigative steps, like questioning witnesses, that were previously off limits in such inquiries until after election results were certified.

The move also allows prosecutors to make more of a spectacle of election fraud in the weeks before the vote on Nov. 3. The U.S. attorney in New Jersey, Craig Carpenito, promoted an arrest on Wednesday of a postal worker suspected of discarding mail, including dozens of ballots, which were found and put back in the mail.

This is how anecdotal reports get conflated into an overarching narrative by the GOP propaganda machine. This was the latest of several anecdotal reports that, after investigation, amounted to nothing. About those ‘ballots’ that Trump said were found ‘in a river’…:

No Wisconsin absentee ballots were found in mail discovered in a ditch in the Fox Valley last week, the state’s top election official said Thursday.

Meagan Wolfe, director of the Wisconsin Elections Commission, told reporters during a virtual news conference, “There was mail found outside of Appleton and that mail did not include any Wisconsin ballots.”

The New York Times noted this week, “It is remarkable, but not at all accidental, that a narrative built from minor incidents, gross exaggeration and outright fabrication is now at the center of the effort to re-elect the president.”

The New York Times reviewed portions of the memo. ProPublica earlier reported details of it on Wednesday.

A longtime standard at the Justice Department keeps investigators from taking any action related to an election or candidates within a couple of months of Election Day out of the concern that even the perception of law enforcement involvement could erode confidence in the vote. The former F.B.I. director James B. Comey was widely criticized in 2016 for announcing the bureau’s decision not to recommend charges in its inquiry into Hillary Clinton’s email server and reopening the case 11 days before Mr. Trump’s upset win.

The Justice Department said that the new memo was not a political act and that no political appointee directed, prepared or issued it.

Bullshit! This has William Barr’s fingerprints all over it. Earlier this year Attorney General Barr Issued New Rules For Politically Sensitive Investigations:

Attorney General William Barr has issued new restrictions on opening investigations into politically sensitive individuals or entities, including a requirement that he approve any inquiry into a presidential candidate or campaign.

Barr’s memo says investigations, including preliminary ones, into a presidential or vice presidential candidate, their campaigns or staff cannot be opened without the written approval of the attorney general.

It also says that an investigation into a congressional candidate or campaign cannot be opened without first notifying the assistant attorney general and the respective U.S. attorney in the district involved.

So yes, this is “a political act” that a “political appointee directed” and had to approve pursuant to Barr’s own directive.

The new guidance stoked fears that Mr. Trump’s political appointees, led by Mr. Barr, were wielding the power of the Justice Department to help his re-election bid. Democrats, civil rights lawyers and former department officials from Republican and Democratic administrations have been on alert this year for unusual political moves by the department in service of the president’s relentless — and false — claims that the United States’ election system is being undermined by pervasive fraud.

Specifically, they have been wary of late-breaking cases based on voter fraud accusations that create more headlines than substantive charges.[See above]. Republicans have sought for years to push the notion that there is a voter fraud problem in the United States, despite little evidence to back up their claims.

Democrats and election and legal experts have said Mr. Trump and Mr. Barr are laying the groundwork to claim that the election was rigged if the president loses.

The Justice Department could “build a narrative, despite the absence of any evidence, of fraud in mail-in voting so Trump can challenge the election results if he loses,” said Joyce Vance, a former U.S. attorney in Alabama under the Obama administration

Three former American Bar Association presidents, as well as several former judges and state and local bar leaders, are offering support to any Justice Department officials who resign or speak out against evidence of politicization in the waning weeks of the 2020 presidential election.

“The public and these professionals should know that if they stand up to such misuse — whether via resignation, public statements, or other forms of expressive dissent — they will have broad support in the legal profession, whose best traditions they will be upholding,” the attorneys and judges wrote in an open letter signed by 600 attorneys, judges and DOJ alumni issued Thursday.

The letter is meant to lend backing to officials like James Herbert, a veteran assistant U.S. attorney from Massachusetts, who wrote a scathing letter assailing Attorney General William Barr in the Boston Globe last month, as well as prosecutors who have withdrawn from cases amid concerns about political interference.

Former heads of the Texas, Illinois, Boston and Washington, D.C., bar signed on as well.

The lawyers say Barr has enabled President Donald Trump’s false claims about alleged voter fraud, raised the specter of releasing politically explosive documents in the heat of the 2020 presidential campaign and routinely intervened in cases affecting allies of the president.

“We support DOJ attorneys and personnel who stand by their oaths and the Department of Justice’s duty to do justice for the public by not participating in partisan misuse of the DOJ,” they write. “They honor the rule of law, our profession, and the country as we face this crucial test for our democracy.“

“Presiding over a federal courtroom for 37 years, I relied on a nonpartisan, independent Justice Department,” said Henderson, the retired federal district judge appointed by Carter. “I fear that under Attorney General Barr, that trust has been shredded.” 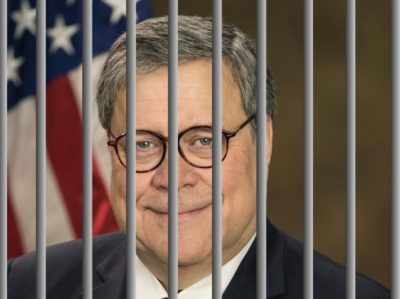 Yes, it has. Barr has turned his Department of “Injustice” into the Trump legal defense team, acting as his consigliere and personal “fixer.” Now he is acting as a member of the Trump reelection campaign.

No Attorney General has so disgraced the Department, and Barr has done so twice, as George H. W. Bush’s Attorney General, dubbed the “Coverup General” in 1992 by William Safire (Essay; Justice Corrupts Justice), and doubled-down under Donald Trump, big time.

For his decades of political corruption in service to Republican presidents, “Billie belongs behind Barrs.”