The Mad King Donald is doubling down on his fantasy of an “Easter miracle” end to the coronavirus pandemic. The New York Post reports, Trump sticks to Easter reopening despite skepticism:

President Trump says he still wants to reopen the country on Easter — even if all states can’t meet his “beautiful timeline.”

But health authorities and lawmakers remain skeptical of Trump’s vision to return life to normal in less than three weeks for the April 12 Christian holiday.

So why would Mad King Donald ignore all the medical experts’ dire warnings about a rapidly expanding coronavirus pandemic that is already beginning to overwhelm the ability of hospitals to care for the sick before the pandemic has reached its apex? Because for this malignant narcissist, it is always all about him:

He added: “I’m not going to do anything rash or hastily — I don’t do that. But the country wants to get back to work.”

The president allowed that his symbolically ideal Easter reopening might only work in less-impacted regions.

“There’s big sections of our country that are very, you know little affected by what’s taking place, then there are other sections that are very heavily affected,” Trump said. “I would say by Easter we’ll have a recommendation.”

Luckily for America, in our federalist system of government Mad King Donald has no authority to order businesses to reopen and workers to return to work. That power resides with the states governors and local municipal governments. States reject Trump calls to reopen economy by Easter.

But because Mad King Donald may influence the behavior of certain Republican governors and mayors, Nicholas Kristof and Stuart A. Thompson explain what would happen if states did follow his plan to “open the country for business” by Easter. Trump Wants to ‘Reopen America.’ Here’s What Happens if We Do.

President Trump says he wants the United States “raring to go” in two and a half weeks, on Easter, with “packed churches all over our country.” He and many other political conservatives suggest that we are responding to something like the flu with remedies that may be more devastating than the disease.

We created this interactive model with epidemiologists to show why quickly returning to normal could be a historic mistake that would lead to an explosion of infections, hospitalizations and deaths. 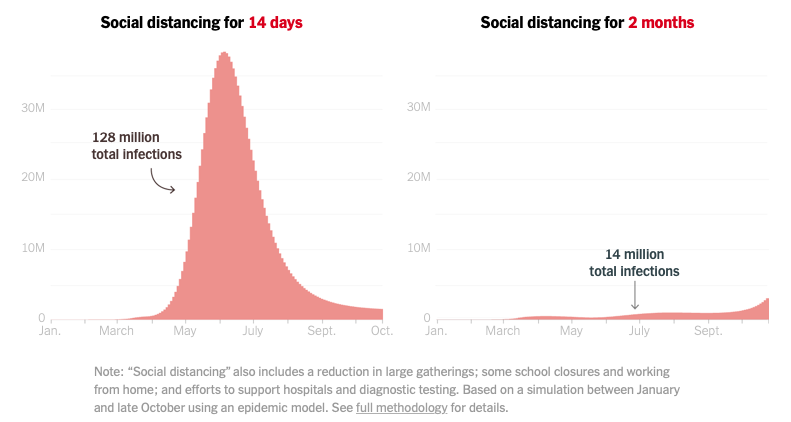 Instead, health experts advise giving current business closures and social distancing a month to slow the pandemic, buying time to roll out mass testing and equip doctors with protective equipment. Then, depending on where we are, we can think about easing up — while prepared for a new burst of infections that will then require a new clampdown.

Play with this interactive model below by moving the slider to change the length of time that controls are in effect, and you’ll see the impact on lives lost. (Go to link).

Using the length of time you chose, the model suggests that 126.5 million people could contract the coronavirus across the United States between January and late October (with 37.8 million at the peak on June 5). More than 1.3 million people would die under these conditions and 125 million people would recover. Tweak the settings, and these numbers will change.

These numbers offer a false precision, for we don’t understand Covid-19 well enough to model it exactly. But they do suggest the point that epidemiologists are making: For all the yearning for a return to normalcy, that is risky so long as a virus is raging and we are unprotected.

“Anyone advising the end of social distancing now needs to fully understand what the country will look like if we do that,” cautioned Dr. Tom Inglesby, a health security expert at Johns Hopkins University. “Covid would spread widely, rapidly, terribly, and could kill potentially millions in the year ahead, with huge social and economic impact.”

Whatever we do, the pain of both disease and business and school closures may be enormous. During the Great Depression, the unemployment rate in the United States reached 25 percent; today, the president of the Federal Reserve Bank of St. Louis, James Bullard, warns that it might reach 30 percent. People may lose their jobs, savings and homes; they will go without parties, weddings, funerals and graduations that give life connectedness and meaning. But we know quite a bit about how to ease economic pain: We can send out checks to individuals, and we can incentivize companies to keep workers on the payrolls. Both steps are part of legislation being considered in Washington.

Some prominent conservatives have suggested that it is worth sacrificing some elderly people to keep the economy moving. “I’d rather die than kill the country,” Glenn Beck told viewers.

But that view reflects two fallacies. First, the fundamental force damaging the economy is not the rulebook on social distancing but rather an out-of-control virus, and the best way to protect the economy is to rein in the pandemic. Second, while these critics speak nobly about sacrificing themselves, the policies they advocate would more likely lead to the deaths of many other people who are older and in poorer shape.

It is a false choice to say that we must accept the deaths of senior citizens to keep small businesses going. And any easing of social distancing should be based on data.

Dr. Larry Brilliant, an epidemiologist who is a veteran of the eradication of smallpox and is now the chairman of an organization called Ending Pandemics, warned that if Trump sends everyone back to work by Easter, “I think history would judge it an error of epic proportions.”

If Covid-19 is as fearsome as some believe, our model suggests a grim possibility: It may be that the only way to control it sustainably is with an economic pause too long to be politically sustainable. In that case, we may be headed for a year of alternating periods of easing and tightening economic activity, with the pandemic rising whenever we ease and subsiding whenever we tighten.

Dr. David N. Fisman, a University of Toronto epidemiologist who helped us build this model, suggests that for the next year we may have to tighten social distancing whenever I.C.U. capacity is stretched, and then loosen it when the situation improves. “This gives the economy and the population ‘breaks’ so that people can breathe and businesses can operate,” Fisman said.

There are some hopeful signs that social distancing and business closures can turn the tide, and not just in South Korea and Singapore. In Italy, confirmed new cases have started to drop. And the number of positive test results conducted by the University of Washington, in hard-hit Seattle, has stabilized.

Trump seems to be pushing for a relaxation of restrictions partly based on his repeated comparisons of Covid-19 to the flu, warning that “we cannot let the cure be worse than the problem itself.” Meanwhile, the Fox News medical correspondent Dr. Marc Siegel scoffed this month about the coronavirus: “worst-case scenario, it could be the flu.”

Modeling the virus underscores why epidemiologists emphasize that this is not the flu and why we should not expect a return to normal within weeks.

One gauge of a virus is how contagious it is. The flu has an infectiousness measure (or R0) of only about 1.5, meaning that each sick person infects on average 1.5 others. In contrast, Covid-19 without social distancing appears to have an R0 of perhaps 2.5.

A second gauge of a virus is how often infected people must be hospitalized. With the seasonal flu that’s roughly 1 percent; with the coronavirus, estimates range from 5 percent to 20 percent.

A third measure is lethality, the “case fatality rate,” or percentage of people who contract an illness who eventually die of it. For the flu, this is about 0.1 percent. For Covid-19, there are enormous uncertainties but even in optimal circumstances it may be 10 times greater, roughly 1 percent — although it has been much higher than that in countries like Italy with older populations and overburdened hospitals.

Here is the full model. You can play with the sliders and see how outcomes change. (Go to link).

We asked Dr. Tara C. Smith, an epidemiologist at Kent State University, what she would advise a bride and groom whose long-planned wedding is imminent, especially if they can’t afford to reschedule. “They should think about putting other people at risk,” she said, “and what would they think if there was an outbreak because of something happy like a wedding.”

These are not questions we wrestle with each flu season.

We’re living through an extraordinary time, forced to make difficult trade-offs with uncertain information — and one lesson of past pandemics is that early “knowledge” of diseases is often wrong. Yet another lesson of history is the value of responding to pandemics early and firmly. In the 1918 flu pandemic, those cities like St. Louis, Mo., that acted decisively saved many lives. In this crisis, parts of the world like South Korea and Taiwan that acted resolutely have managed far better than those that were more relaxed, like Italy, Iran and the United States.

That’s why epidemiologists and public health experts warn against relaxing too soon. Dr. Peter J. Hotez, a global health expert at Baylor College of Medicine, calls for maintaining controls for at least another month and then reassessing.

Life is about making difficult decisions in the context of uncertainty, and we hope this model will help you appreciate the trade-offs — and the significance of sustained efforts for social distancing not only by the president but also by each of us in our own lives.

There is new data which suggests the Covid-19 coronavirus may have seasonal properties, much like the flu, waning in the hot summer months and giving a false sense it is ended, but comes roaring back with a new wave of infections in the fall, following the pattern of the 1918-19 flu pandemic. Fauci says US needs to be prepared for coronavirus to be cyclical:

Americans need to be prepared for the possibility that COVID-19 could become a seasonal disease, Dr. Anthony Fauci warned Wednesday.

Fauci told reporters during a White House briefing that more cases of the disease caused by the novel coronavirus have begun to appear in the Southern Hemisphere, which is transitioning into colder seasons.

If there is an outbreak in the Southern Hemisphere, Fauci said “it will be inevitable” that the disease will make a comeback even if it is temporarily stopped.

New studies show that warm, humid weather might slow the virus — which could mean the pandemic will ease in the coming summer months in North America and Europe.

But Fauci said America needs to be ready in case it comes back in the fall.

“I know we’ll be successful in putting this down now, but we really need to be prepared for another cycle,” Fauci said.

He added that the current steps being taken, such as fast-tracking potential vaccines and drug treatments, will be essential to stopping the virus a second time.

Listen to the medical experts, not the ravings of the pathological narcissist Mad King Donald, whose only interest is his own self-interest.

Yuma Judge Orders Disclosure of Those Testing Positive for COVID-19

An Idea for Students to Make Up for Lost Learning Time:...

Tempe Mayor-Elect Corey Woods Prepares for his Inauguration on July 2,...

Sheriff Chris Nanos would like to serve the People of Pima...