On Monday, February 10, 2020, the Trump Administration released its proposed budget for 2021.

If passed, it would launch a New Reactionary Dark Age for the American People by cutting vital programs for the countries most vulnerable and further exploding the national debt.

Among the proposals for cuts are:

Overall, the Environmental Protection Agency would receive a 27 percent budget cut. Housing and Urban Development would be reduced by 15 percent. Health and Human Services would be lowered by nine percent. Agriculture, Energy, and Education would be brought down eight percent. State and United States Aid programs would be slashed 21 percent. 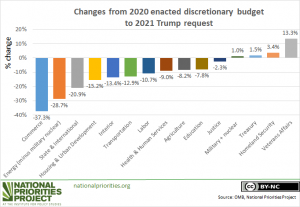 The only areas that would receive an increase are N.A.S.A. (which may actually be a good thing,) Defense, Veterans Affairs, and, thanks to the failed tax cuts, the Nation’s debt.

People should note that there is no inclusion of the large infrastructure program that Mr. Trump promised in his campaign in this budget.

This is not a budget that would take America forward. It is mean spirited, lacks a forward vision, betrays the American Dream and Ideal, and would plunge the country into stagnation.

What possible benefit to the country would result from starving children not getting proper health care from the proposed cuts in C.H.I.P. and the Food Stamp program?

How does the population live well when they are increasingly exposed to dirtier water and air?

How does the nation progress when cuts are made to scientific research?

How does the nation remain fiscally viable when the nation’s debt grows well beyond sustainable levels?

NEVER LET REPUBLICANS GET AWAY WITH SAYING AGAIN THEY CARE ABOUT THE DEFICIT.

The Arizona Democratic Party and candidates for Congress have voiced their concerns for this horrible budget proposal.

Brad Bainum of the Arizona Democratic Party issued a statement which read:

“While U.S. Sen. Martha McSally silently stands by Washington Republican’s push to cap and cut Medicaid funding, a report from KJZZ highlights how the proposal could lead to reduced care for Arizona patients, including limits on access to care and prescription drug coverage.”

“Republicans’ proposal to block grant Medicaid has been criticized by groups like the AARP, which has warned it “could lead to loss of services or coverage,” and by the American Medical Association, which has said the GOP plan “would increase the number of uninsured.”

“AHCCCS, Arizona’s Medicaid program, provides health care coverage for 2 in 5 kids, 1 in 3 people with a disability, and 3 in 5 nursing home residents in Arizona.”

“After Saturday, tweeting that he “wouldn’t touch” Arizonans’ earned benefits, Donald Trump yesterday released a budget that takes an ax to vital programs that working families rely on — including AHCCCS and the Children’s Health Insurance Program. Republicans have been pushing for such cuts since they passed huge tax cuts for profitable corporations and the wealthiest Americans, that have largely left working for families comparatively behind, but helped dozens of Fortune 500 corporations pay $0 in federal income tax.”

“These cuts are no surprise, as Trump is clearly hell-bent on pursuing deep cuts to these vital programs. Just last month, Trump opened the door to future cuts to Social Security and Medicare. And last year, Trump’s FY2020 budget request proposed cutting $575 billion from Medicare and spending $26 billion less on Social Security programs.”

“Arizonans can’t rely on Donald Trump to take care of their hard-earned benefits. Trump’s FY21 budget proposal prioritizes his rich donors and special interest groups while demonstrating how little he cares about hardworking Arizonans. Democrats are ready to fight tooth and nail to protect these vital programs and ensure the well-being of every Arizonan.”

“Maria Teresa Kumar did a tweet about these horrible cuts. Now I have been going around Congressional District 4 and I see people struggling. Arizona also has 100,000 abandoned mines. You notice every one of these cuts hurts AZ04, Arizona and our nation. I mean No and Low-income people and Native Americans. It hurts babies to seniors. What kind of future do we want? My opponent Rep. Paul Gosar
is not fighting against this. Why?”

“This is Trump’s and my opponent Andy Biggs’ plan. This isn’t a policy or combating fraud and corruption. This is a death sentence for our most vulnerable. This is stripping away opportunities for our families. This is wrong.”

Dr. Hiral Tipirneni, one of the candidates for Arizona Congressional District Six,  posted her views of the budget on Facebook, writing:

Michael Muscato, one of the candidates for the Democratic Congressional District Eight Nomination stated:

“Arizona’s 8th District has historically prided itself on being a community of Christian values, the Constitution, and fiscal responsibility. Those three topics have for my entire life being the “pillars” of the Republican Party. One little problem though…the leadership of that Political party is locking people in cages, stomping all over our Constitution, and increasing our national debt and deficit faster than any other administration before it…during a “Huge” economy…”

“Cuts to Social Security, Medicare & Medicaid will be devastating to Arizonans, those living on fixed incomes, and Americans of ALL political parties. Entitlements are not social security, Medicare, & Medicaid. The only entitlements in our government are Trump, Lesko & the rest in power seeking to cut programs that support our most vulnerable Americans. More shockingly is how devastating this budget will be for members of the Republican Party who voted Lesko and Trump in under their promise not to touch Social Security and Medicare…”

“When someone tells you who they are, listen the first time.”

“The only solution now is to vote them out in November.”

“The planned deficit is too high and will result in a further unacceptable increase to the national debt, and cuts can be found in other areas than the social safety net”

Fortunately, with a Democratically controlled House and enough Republicans in both chambers of Congress worrying about their uphill battle for reelection, this draconian budget from the President of Betrayal, like the others he has proposed, will never see final passage.

Its publication does provide a wonderful opportunity for Democrats (along with the inappropriate intervention of Bill (Roy Cohn) Barr into the Roger Stone case) to draw further contrasts with the 2016 Popular Vote Loser and his Trump Zone-Fox Island-Republican cult followers on how they would take the country in a different and more inclusive and forward direction.

The campaign ads really write themselves if the Democrats know what to do with this gift.

There is not a moment to lose.