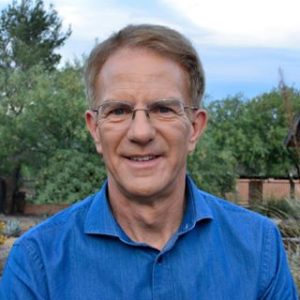 “Paul Durham is a solar energy advocate, an attorney who spent two decades helping to grow businesses, and a strong believer in the value of community. Since moving here in the early aughts, he has been very active in Tucson. Paul volunteers in leadership roles with El Grupo Youth Cycling, the Pima County Democratic Party and the Tucson-Pima County Metropolitan Energy Commission, where he has worked to promote solar energy.

A graduate of the University of Washington and Stanford Law School, Paul has two decades of business law under his belt, advising businesses large and small and helping them grow. While working full-time, he attended evening classes at the University of Colorado, where he received an MBA with concentrations in finance and organizational behavior. Paul has also studied Spanish at immersion schools in Mexico and Guatemala.

Growing up in eastern Washington State, Paul learned the value of education from his dad, who was an elementary school principal. Perhaps because of his deep belief in education, Paul has always been a progressive. In 2004, he worked full-time on John Kerry’s Presidential campaign. He managed Nina Trasoff’s 2005 campaign for Tucson City Council and served as her Chief of Staff after she was elected. He has also volunteered as treasurer for the Pima County Democratic Party.

On August 5, the Arizona Daily Star endorsed Canyon Fence Company businessman/attorney Tom Tom Tronsdal.  The third candidate in this race is former Mansfeld Middle School teacher Felicia Chew, a political newcomer. The winner of the Dem primary will face off with Independent Gary Watson in the General Election on Nov. 7, 2017.
The City of Tucson primary is on August 29, 2017 and early ballots went out on August 9, 2017.  Vote wisely on or before August 29.
Advertisement