You knew that “Teleprompter Trump” being forced to read from a hostage statement prepared for him on Monday — a “low-energy, vacant-eyed mouthing of the words written for him condemning white supremacists this week,” as Joe Biden so accurately described on Wednesday — would not last.

“Twitter Trump” used the tragedy of a mass shootings in El Paso, Texas and Dayton, Ohio not to be the “consoler-in-chief” as other presidents have done, but as a campaign event for his reality TV show reelection campaign.

Trump’s propaganda media team strictly controlled the event — the traveling press corps was not allowed to observe Trump’s visit with the victims who remained hospitalized — yet the Trump White House filmed his visit for use in campaign ads the same say.

Per the NY Times, “Dan Scavino, the president’s social media director, posted pictures on Twitter. “The President was treated like a Rock Star inside the hospital, which was all caught on video,” he tweeted. “They all loved seeing their great President!”

Per the Washington Post, “The White House distributed its own photos of Trump smiling for pictures with first responders, along with a slickly produced video, helping make the president the center of attention.”

The images you saw on news broadcasts came from Trump’s propaganda media team, not from an independent free press.

Twitter Trump previewed his day by rage tweeting overnight at former El Paso congressman Beto O’Rourke who has been hammering him as a white supremacist. ‘Be quiet!’: Trump claims Beto O’Rourke uses a ‘phony name to indicate Hispanic heritage’. “The attack, which raised the discredited claim that O’Rourke adopted a Spanish-language nickname as a political tactic, struck a jarring tone barely 24 hours after Trump called for bipartisan cooperation in the wake of two mass shootings over the weekend that claimed at least 31 lives.”

On a day intended to show empathy and compassion for cities scarred by a weekend of gun violence, it quickly devolved into an occasion for rage-fueled broadsides against Democrats and the news media. New York Times, Trump Uses a Day of Healing to Deepen the Nation’s Divisions.

On a day when President Trump vowed to tone down his rhetoric and help the country heal following two mass slayings, he did just the opposite — lacing his visits Wednesday to El Paso and Dayton, Ohio, with a flurry of attacks on local leaders and memorializing his trips with grinning thumbs-up photos. Washington Post, Trump attacks local leaders as he visits two cities grieving from mass shootings.

“The result was the latest example of Mr. Trump’s penchant for inflaming divisions at moments when other presidents have tried to soothe them, and further proof of his staff’s inability to persuade him to follow the norms of presidential behavior.”

Senator Sherrod Brown and Dayton Mayor Nan Whaley described the visit by the president and first lady in favorable terms.

Whaley added: “I think the victims and the first responders were grateful that the president of the United States came to Dayton.”

Both Brown and Whaley, however, were also sharply critical of Trump’s divisive rhetoric and Republican resistance to gun-control legislation.

Trump screamed at his aides on his way to El Paso as he melted down over Dems’ criticism: report:

According to The New York Times, Trump shouted at his aides as his plane headed to El Paso, accusing them of not doing enough to defend him from criticism. This came after Sen. Sherrod Brown (D-OH), who accompanied Trump during his visit to Dayton, said that some of the survivors in the hospital privately said they don’t support the president.

Following the Ohio visit, Trump’s social media director Dan Scavino lashed out at Brown, saying that the president was in fact treated like a “rock star.” Trump himself later attacked Brown as a “failed presidential candidate (0%).” (Brown is not running for president.) 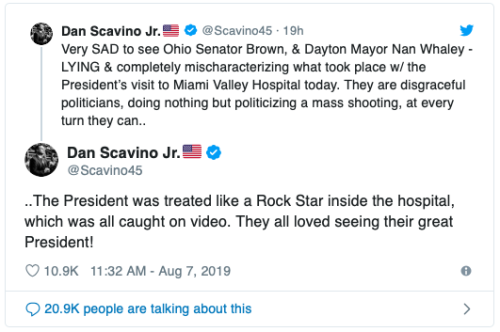 Scavino added on Twitter, “They are disgraceful politicians, doing nothing but politicizing a mass shooting, at every turn they can.” Talk about your classic case of psychological projection!

Trump and his aides go on bizarre attack after hospital visit over something that didn’t happen:

While it’s not unusual for Trump and his team to lash out at critics, these remarks were particularly bizarre, because Brown and Whaley didn’t say anything that contradicted Scavino’s claims.

Whaley herself said: “I think the victims and the first responders were grateful that the President of the United States came to Dayton.”

Trump, too, jumped on the bandwagon in the attack on Brown and Whaley: 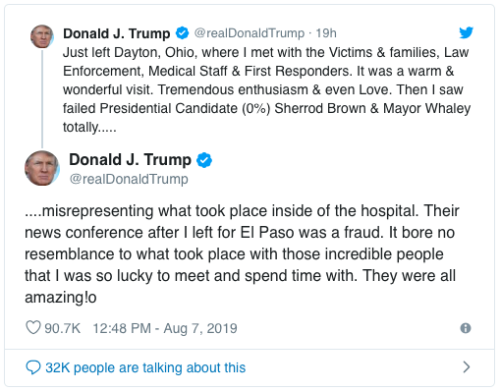 (While Brown considered running for president this year, he declined to get in the race, so Trump’s claim that he is a “failed” candidate is flatly false.)

Whaley and Brown have both been critical of the president, so it’s not too surprising that the White House would target them. But they did not criticize him for his actual appearance in the hospital, which is what Trump and aides [were] bizarrely fixated on.

When Whaley first saw Trump’s tweets criticizing her and Brown, she paused for a moment to read them on a cellphone and said, “I don’t — I mean, I’m really confused. We said he was treated, like, very well. So, I don’t know why they’re talking about ‘misrepresenting.’

“Oh, well, you know,” the mayor added with a shrug. “He lives in his world of Twitter.”

Whaley later responded to Trump’s comments about her and Brown by calling him “a bully and a coward.” She said on CNN, “It’s fine that he wants to bully me and Sen. Brown. We’re okay. We can take it.”

Trump’s reception in El Paso was less hospitable. According to the report from the Washington Post, eight surviving victims of the mass shooting in El Paso refused to meet with both Donald Trump and Sen. Ted Cruz (R-TX) during their visit to the hospital on Wednesday.

None of the eight victims of the El Paso mass shooting still being treated at University Medical Center agreed to meet with the president,” the reports states, with a spokesperson for the hospital stating, “This is a very sensitive time in their lives. Some of them said they didn’t want to meet with the president, some of them didn’t want any visitors.

Before Trump’s visit Wednesday, however, some of the hospitalized victims accepted visits from a number of city and county elected officials, as well as Reps. Veronica Escobar (D-Tex.) and Jesús “Chuy” García (D-Ill.).

Trump offered his own affirmation on Twitter: “It was a warm & wonderful visit. Tremendous enthusiasm & even Love.”

After departing from El Paso, Mr. Trump was on the attack again. Reflecting his anger over television coverage of his day, which prominently featured the protests in both cities, he tweeted that the “Fake News” media “worked overtime trying to disparage me and the two trips, but it just didn’t work. The love, respect & enthusiasm were there for all to see.”

“It’s all about me!” Trump’s narcissistic personality disorder is truly disturbing.

Moments after boarding Air Force One and departing El Paso Wednesday, Trump swiped at Rep. Joaquin Castro (D-TX) who, on Tuesday, came under criticism for tweeting a list of president’s donors in his district. In a tweet misspelling the congressman’s name as “Juaquin,” Trump went after both the Texas representative and his twin brother — presidential candidate Julian Castro. Trump Attacks Texas Democrat at El Paso Shooting Scene. 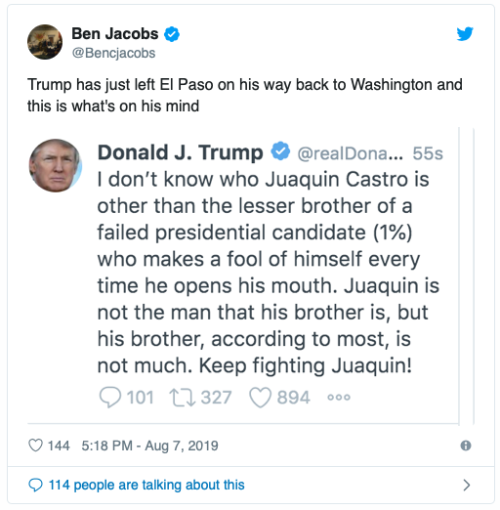 President Trump on Wednesday renewed his criticism of Fox News anchor Shepard Smith, arguing that “Fake News CNN is better” and saying that he now tunes in to the conservative news outlet One America News Network whenever he gets the chance.

Smith acknowledged Trump’s tweet during his show Wednesday, saying, “Good afternoon, Mr. President. It’s nice to have you with us.”

What this demonstrates is that Trump is a reality TV show producer who wants to control every aspect of the propaganda production that he is selling you, but when the reality-based media reports the truth of what is actually occurring, he becomes unhinged and enraged that they question his propaganda production.

So to review, after saying that he would not engage in partisan attacks on his political opponents earlier in the morning, Twitter Trump managed to attack:

If he owned a dog, Trump would have kicked his dog upon returning home to the White House in a fit of rage.

In his prepared hostage speech on Monday, Trump tried to claim that the gunmen in El Paso and Dayton suffered from mental illness, without evidence.

But we have clear evidence right before our eyes that President Donald Trump is mentally and emotionally unbalanced, and exhibits the same anger and rage that the gunmen exhibited in carrying out their heinous crimes. If Trump owned a gun, who would be subject to the “red flag” laws that some in Congress are proposing.

When is that craven coward Vice President Mike Pence going to do his constitutional duty and convene the cabinet to invoke the 25th Amendment to remove this mentally and emotionally incompetent man who is “unable to discharge the powers and duties of his office” from the presidency, and force Trump to seek a psychological evaluation in order to regain his office?

Mesnard’s Pre Existing Bill is lacking but Democrats can build on...