Remember when Donald Trump met with Russian Foreign Minister Sergey Lavrov and then-Russian Ambassador to the US Sergey Kislyak in the Oval office the day after he fired his FBI director James Comey? (above) Trump told Russian officials, “I just fired the head of the FBI. He was crazy, a real nut job,” based on a document read to the New York Times by an official. “I faced great pressure because of Russia. That’s taken off.”

That’s not all that Russian asset Donald Trump did. Trump shared highly classified information with the Russian foreign minister and Russian ambassador to the US in the White House meeting, The Washington Post reported. The intelligence relates to what is known as a special access program, or SAP, which covers some of the most classified information and is protected with unique access and security protocols.

Trump’s then-national security adviser H.R. McMaster, who participated in the meeting, tried to reassure that “At no time were intelligence sources or methods discussed and the President did not disclose any military operations that weren’t already publicly known,” he said. “I was in the room. It didn’t happen.”

The United States Intelligence Community wasn’t buying that. CNN reports an Exclusive: US extracted top spy from inside Russia in 2017:

In a previously undisclosed secret mission in 2017, the United States successfully extracted from Russia one of its highest-level covert sources inside the Russian government, multiple Trump administration officials with direct knowledge told CNN.

A person directly involved in the discussions said that the removal of the Russian was driven, in part, by concerns that President Donald Trump and his administration repeatedly mishandled classified intelligence and could contribute to exposing the covert source as a spy.

The decision to carry out the extraction occurred soon after a May 2017 meeting in the Oval Office in which Trump discussed highly classified intelligence with Russian Foreign Minister Sergey Lavrov and then-Russian Ambassador to the US Sergey Kislyak. The intelligence, concerning ISIS in Syria, had been provided by Israel.

At the time, then-CIA Director Mike Pompeo told other senior Trump administration officials that too much information was coming out regarding the covert source, known as an asset. An extraction, or “exfiltration” as such an operation is referred to by intelligence officials, is an extraordinary remedy when US intelligence believes an asset is in immediate danger.

A US official said before the secret operation there was media speculation about the existence of such a covert source, and such coverage or public speculation poses risks to the safety of anyone a foreign government suspects may be involved. This official did not identify any public reporting to that effect at the time of this decision and CNN could not find any related reference in media reports.

Asked for comment, Brittany Bramell, the CIA director of public affairs, told CNN: “CNN’s narrative that the Central Intelligence Agency makes life-or-death decisions based on anything other than objective analysis and sound collection is simply false. Misguided speculation that the President’s handling of our nation’s most sensitive intelligence—which he has access to each and every day—drove an alleged exfiltration operation is inaccurate.”

A spokesperson for Secretary of State Mike Pompeo declined to comment. White House press secretary Stephanie Grisham said, “CNN’s reporting is not only incorrect, it has the potential to put lives in danger.” 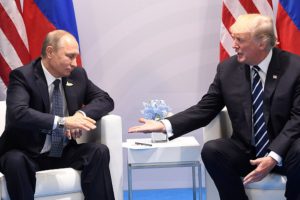 Those concerns continued to grow in the period after Trump’s Oval Office meeting with Kislyak and Lavrov. Weeks after the decision to extract the spy, in July 2017, Trump met privately with Russian President Vladimir Putin at the G20 summit in Hamburg and took the unusual step of confiscating the interpreter’s notes. Afterward, intelligence officials again expressed concern that the President may have improperly discussed classified intelligence with Russia, according to an intelligence source with knowledge of the intelligence community’s response to the Trump-Putin meeting.

Knowledge of the Russian covert source’s existence was highly restricted within the US government and intelligence agencies. According to one source, there was “no equal alternative” inside the Russian government, providing both insight and information on Putin.

CNN is withholding several details about the spy to reduce the risk of the person’s identification.

The secret removal of the high-level Russian asset has left the US without one of its key sources on the inner workings of the Kremlin and the plans and thinking of the Russian president at a time when tensions between the two nations have been growing. The US intelligence community considers Russia one of the two greatest threats to US national security, along with China.

“The impact would be huge because it is so hard to develop sources like that in any denied area, particularly Russia, because the surveillance and security there is so stringent,” a former senior intelligence official told CNN. “You can’t reacquire a capability like that overnight.”

The decision to pull the asset out of Russia was the culmination of months of mounting fear within the intelligence community.

In the first months of his administration, Trump’s handling of classified intelligence further concerned intelligence officials. Ultimately, they decided to launch the difficult operation to remove an asset who had been working for the US for years.

The President was informed in advance of the extraction, along with a small number of senior officials. Details of the extraction itself remain secret and the whereabouts of the asset today are unknown to CNN.

Most recently, Donald Trump may have shared classified material on Twitter when he tweeted what appears to be a a surveillance photo from a US satellite or drone. While the president possesses the ability to declassify material at will, security experts warned that publishing the material could give adversaries valuable information about the US’ intelligence gathering capabilities. Experts worry Trump revealed US secrets when he tweeted a photo of an Iranian launch site:

The image shows the aftermath of a failed Iranian rocket launch; despite growing tensions between Iran and the US, Trump disavowed any American meddling in his tweet. 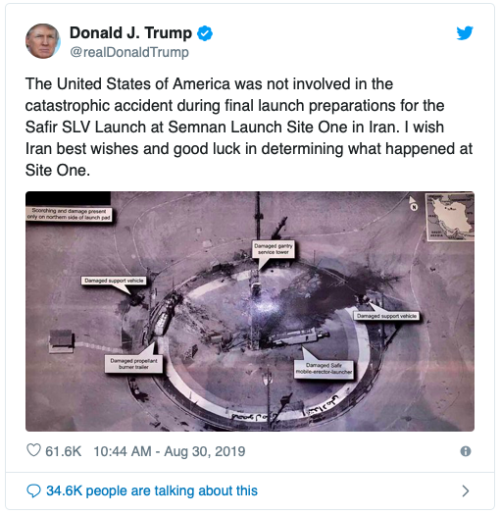 The rocket, which Iranians hoped would carry a satellite into space, exploded on its launch pad at the Imam Khomeini Space Center in northern Iran, about 200 miles east of Tehran on Thursday.

The problem was a technical one, an unnamed Iranian official told Reuters. But the president’s tweet appeared to have come from a desire to make it clear that the incident was not linked to US military activity or sabotage. Iran had not publicly accused the US of interfering in the launch ahead of Trump’s tweet, and did not do so after; however, the US does in fact have a program that aims to sabotage Iranian missile development.

It is not completely clear where the image Trump shared came from. Security experts told NPR that, given the image’s angle and the time at which it was taken, it could have been taken by the USA-224 American spy satellite. Other experts believe the image actually came from a military drone.

Either way, such images are usually kept classified in order to occlude US intelligence gathering methods and capabilities. The CIA, the director of national intelligence, and the State Department referred questions to the White House when asked about the photograph by CNN, and the National Security Council declined to comment. A defense official told CNBC that the photograph was included in the president’s intelligence briefing Friday.

Trump refused to confirm whether he’d tweeted a photograph from his security briefing while speaking to reporters Friday before boarding Marine One; instead, he defended his choice to share the image.

“We had a photo, and I released it, which I have the absolute right to do,” he said.

When asked explicitly where the photograph came from, Trump said, “You’ll have to figure that one out yourself.”

Experts at home have been critical of Trump’s tweet

In light of this ongoing international tumult, Trump’s decision to share the image of the failed rocket launch is provocative.

While Trump has said he wanted to make it clear the US had not sabotaged the Iranian launch, he also either purposefully or inadvertently demonstrated what kinds of intelligence the US is capable of gathering.

You can be certain that our adversaries have taken note and are analyzing how to respond accordingly.

Imagery NPR shared of the launch Thursday was indicative of the kind of technology publicly available for monitoring and surveillance — it published images from a commercial satellite imagery company called Planet, in partnership with the Middlebury Institute of International Studies, that simply showed a plume of smoke billowing from a recently-painted, blue launchpad.

The image that Trump shared was of higher quality, however. It revealed substantially greater detail, including a Farsi phrase written on the pad: “National Product, National Power.” A black rectangle in one corner of the image may have concealed the classification of the photograph.

Ankit Panda, an adjunct senior fellow at the Federation of American Scientists specializing in satellite imagery, told NPR that the tweet reveals “some pretty amazing capabilities that the public simply wasn’t privy to before this.”

Nuclear expert Joshua Pollack told CNBC, “This will have global repercussions,” giving the US’ adversaries valuable insight into the capabilities of its intelligence gathering technology, and called Trump’s decision to tweet the photo “so reckless.”

The experts fear that by studying the image, Iran and other actors might now be better able to obscure their activities — particularly any nuclear activities — from the US.

Saturday, Trump defended his actions on Twitter, while also attacking a few of his habitual foils and members of the US intelligence community. 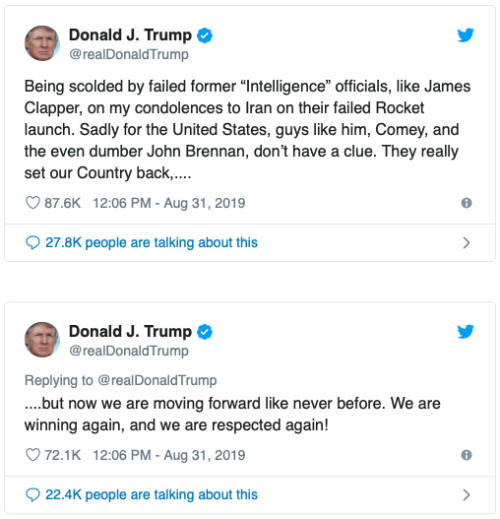 The tweets echo the stance the president took with reporters Friday; unconcerned by criticism over security concerns, Trump said “We’ll see what happens.”

That sounds like some kind of veiled threat to me.

Paul Waldman of The Post writes, A shocking CNN scoop confirms: Officials are defending our country from Trump. Donald Trump needs to be removed from office.