Back in June, Donald Trump and his “new Roy Cohn” fixer at the Trump “Injustice” Department, William “Coverup” Barr, promoted the conspiracy theory that foreign actors could tamper with those ballots. Trump and Barr say mail-in voting will lead to fraud. Experts say that’s not true: 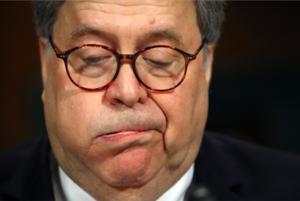 In an interview with Fox News on Sunday, Attorney General Bill Barr said mail-in voting “absolutely opens the floodgates to fraud” and claimed that “a foreign country could print up tens of thousands of counterfeit ballots, and (it would) be very hard for us to detect which was the right and which was the wrong ballot.”

In an interview with the New York Times, the attorney general said a number of foreign countries “could easily make counterfeit ballots, put names on them, send them in.” In a string of tweets on Monday, President Trump followed suit, claiming the 2020 election would be “rigged” because “millions of mail-in ballots will be printed by foreign countries.”

“Bill Barr is a liar. Our nation’s chief law enforcement officer is trying to burn down American democracy to prop up a corrupt impeached executive,” he tweeted. “Barr’s debasement of our justice system and his assaults on American democracy have been so relentless I’ve been calling for his impeachment and the revocation of his law licenses since last year.”

The plan to interfere with mail-in ballots is not coming from a hostile foreign adversary.

That call is coming from inside the White House (a paean to horror movies).

It is the RNC and the Trump campaign, in particular the Twitter-troll-in-chief himself, who are trying to undermine mail-in ballots and sow confusion and doubt about the integrity of the election. Donald Trump has made it abundantly clear that he will declare victory on the night of Election Day, even if he is losing badly by a landslide, and he will contest the election as “rigged” and a “fraud.” Trump’s assault on election integrity forces question: What would happen if he refused to accept a loss? Disputing the result in November if he loses will lead to an unprecedented test of American democracy.

Just to be clear, the Republican interference with mail-in ballots (voter suppression, interference with the mail) is not only a violation of federal law but is an impeachable offense of the highest order. Alexander Hamilton warned specifically about a foreign power’s ability to cultivate a president or another top official. In Federalist Paper Number 68, published in 1788, Hamilton wrote: 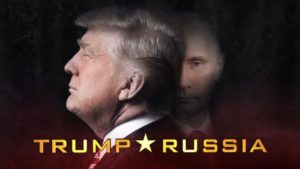 These most deadly adversaries of republican government might naturally have been expected to make their approaches from more than one quarter, but chiefly from the desire in foreign powers to gain an improper ascendant in our councils. How could they better gratify this, than by raising a creature of their own to the chief magistry of the Union?

Putin doesn’t need to attack our elections from Russia when his Kremlin candidate in the White House can use the levers of power of the U.S. Government to pull an inside job.

On Wednesday, the U.S. intelligence community dismissed Trump’s and Barr’s conspiracy theory about hostile foreign powers manipulating mail-in ballots, and effectively called them the liars that they are. Election security officials see no sign of foreign threat to mail-in voting:

Foreign governments such as Russia and China continue to try to interfere in the upcoming U.S. election, but officials have seen no evidence of countries trying to manipulate or manufacture mail-in ballots, officials said Wednesday.

With less than 70 days left until Election Day, federal authorities are ramping up their efforts to keep state and local election systems secure, particularly in light of Russian interference in the 2016 presidential race, which led to criticism that the government had been slow and soft in its response.

In seeking to assure the public that federal, state and local governments are paying far closer attention to the dangers of hacking and misinformation, officials said Wednesday that they have also not seen any indications that foreign governments are trying to tamper with what is expected to be an unprecedented amount of mail-in voting this year.

“We have no information or intelligence that any nation or state actor is engaging in any kind of activity to undermine any part of the mail-in vote or ballots,” said one senior federal official, who like other officials at a briefing Wednesday for reporters spoke on the condition of anonymity.

Deputy Attorney General Jeffrey A. Rosen made a similar point at a separate appearance Wednesday. (Directly contradicting his boss).

“We have yet to see any activity intended to prevent voting or to change votes, and we continue to think that it would be extraordinarily difficult for foreign adversaries to change vote tallies,” Rosen said in remarks to the Center for Strategic and International Studies, a Washington think tank.

Those assurances are in contrast to statements by President Trump, who has repeatedly argued that mail-in voting is so ripe for abuse that he would block additional funds for the U.S. Postal Service to handle a surge in mail ballots this year.

U.S. officials insisted Wednesday that they are ramping up their security efforts but have not seen a similar increase in effort on the part of foreign-nation hackers. Instead, they said, what they have seen are persistent efforts to penetrate state or local election computer systems. Mostly, officials said, those efforts have been unsuccessful and have not been similar to the intensity of 2016 attacks on, for example, election systems in Illinois.

“We haven’t seen to date a ramp-up in activity targeting election infrastructure over, say, the last few months,” said one federal election security official. Nor has there been the kind of public dumping of thousands of hacked emails that had already occurred by this point in the 2016 campaign. U.S. officials have said the 2018 midterm elections did not suffer the scale and scope of foreign interference, though U.S. officials did move to disrupt a major Russian troll factory that year.

The federal government has pledged to do more than in past years to guard against hacking and other types of interference targeting American elections. The country’s top military cybersecurity agencies are sending experts abroadto better search for malicious software on the computers of U.S. allies, in the hope that such real-world intelligence-gathering may help them better defend American computer networks.

In his speech, Rosen laid out the lengthy history of foreign interference in U.S. elections, stretching back to the time of Thomas Jefferson. The practice is not new, he said, but its most effective antidote is vigilance by voters.

He conceded that when it comes to propaganda and misinformation, it can be difficult for the average American to discern at any given moment what is legitimate and what is fake, and whether such deceptions are being delivered by foreign actors.

Especially when that propaganda and misinformation is being propagated by Donald Trump and the Republican Party and its allies.

“One of the difficulties today we face is sometimes, we can’t tell if a source is domestic or foreign,” Rosen said. He urged the public to “be careful, be skeptical, be knowledgeable, be informed.”

Greg Sargent at The Post adds, Trump’s corruption of the election just took a hit. But there’s still a problem. (excerpt):

The basic facts about how vote-by-mail works, and what would be required to actually pull off something like that, render the whole notion utterly absurd.

It’s a good thing that intelligence officials weighed in to set the record straight. Nonetheless, this raises a few cautionary points.

First, this is an object lesson in how a president who is determined to corrupt literally everything in sight can grotesquely distort public debate beyond recognition.

As it happens, there is an actual threat posed by foreign powers that is related to vote-by-mail. As Rep. Adam B. Schiff (D-Calif.) and some experts have pointed out, there is a danger that Russian disinformation might try to amplify Trump’s lies about mail-in balloting.

This could be done both to undermine voters’ confidence in our political system (a key reason for the original Russian electoral sabotage effort), or to try to foment civil unrest if Trump does try to cast millions of mail ballots as part of a plot to steal the election away from him.

Yet, as far as I can tell, the intelligence officials didn’t address this threat. Instead, they focused on Trump’s wildly unhinged theories about foreign powers hijacking vote-by-mail. Again, it’s good that those are getting debunked. But it’s crazy that they are the ones framing the debate.

Second, it’s still not clear how shackled intelligence officials will be in getting good information out to the public.

As it is, they have announced that Russia is indeed currently trying to interfere in our election. But they may be both muting their warnings and possibly withholding information that might give the public a clearer picture of what’s really happening.

Right now, a key reason Trump is attacking vote-by-mail, in addition to laying the groundwork to contest a losing result, is to get voters to conclude that their own mail ballots might not be counted, so they don’t use vote-by-mail at all (and, Trump hopes, don’t vote in person because of pandemic conditions, either).

So voters ideally need to hear more reassurances from officials — at, say, the Department of Homeland Security — that vote-by-mail is safe and secure (in addition to hearing it won’t get hijacked by a foreign power).

“When you have a president who distorts facts and intelligence relentlessly, the role of the intelligence community in speaking directly to the public takes on unusual, added importance,” Joshua Geltzer, a senior National Security Council official from 2015 to 2017, told me.

“People need to hear this directly and fully, rather than mediated and with Trump weighing in on Twitter to distort it again,” Geltzer continued. “He has so dirtied the waters on this that it will take every piece of our government trying to establish what truth is to even begin overcoming his falsity.”

What’s more, if Trump does go through with his openly advertised intention to declare countless outstanding mail ballots illegitimate on and after Election Day — whether because of foreign-or domestic-invented voter fraud — will intelligence officials be in a position to sufficiently rebut those assertions?

“There’s every reason to expect that Trump will try to muzzle and shackle and silence those who try to undermine his claims,” Geltzer told me.

No question, it’s good that Trump’s efforts to corrupt the election with disinformation took this hit. But there’s still a lot to worry about.

Donald Trump has has been a liar and a cheater his entire life. He cheated in 2016 and lied about it, and now he is cheating again and lying about it.