(Update) Action Alert: you have until September 30 to kill this zombie ‘Trumpcare’ bill

Home/COVID-19 & Healthcare/(Update) Action Alert: you have until September 30 to kill this zombie ‘Trumpcare’ bill
Previous Next

(Update) Action Alert: you have until September 30 to kill this zombie ‘Trumpcare’ bill

Yesterday I posted an Action Alert: you have until September 30 to kill this zombie ‘Trumpcare’ bill. 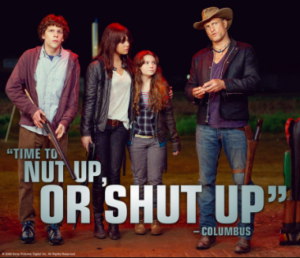 Among opinion leaders, progressive voices like the Washington Post’s E.J. Dionne and the New York Times’ Paul Krugman both devoted their columns today to warning the public that the threat to the existing health care system is quite real. 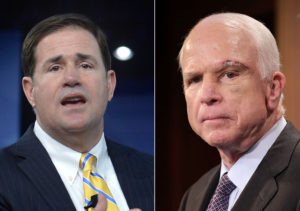 Dylan Scott at Vox.com reports that Governor Doug Ducey, the ice cream man hired by Koch industries to run their Southwest subsidiary formerly known as the state of Arizona, has announced his support for the zombie “Trumpcare” bill — before he has any idea of what its effects are — potentially giving cover to Senator John McCain to once again demonstrate that he is not a man of principles — “regular order! “– but a partisan political hack. John McCain might have just received permission to vote for Obamacare repeal:

The governor’s position matters because Sen. John McCain (R-AZ) has said his governor’s support was necessary for the senator to back the plan, which would bring it one vote closer to the magical number of 50.

Ducey said that he would support the bill from Sens. Bill Cassidy (R-LA) and Lindsey Graham (R-SC), which would turn much of Obamacare’s funding into block grants for states with few strings attached. The bill would also place a federal spending cap on Medicaid, which is jointly funded by the states and feds, for the first time. That has caused many governors, who administer Medicaid, to balk.

McCain has frequently conditioned his support for any Obamacare repeal bill on Ducey’s blessing.

McCain will be one of the most closely watched votes on Cassidy-Graham, along with Sens. Susan Collins, Lisa Murkowski, and Rand Paul. Senate Republicans need 50 of their 52 members to pass the bill.

Jordan Weissman at Slate reports, As Usual, Republicans Won’t Have Any Clue What Their New Obamacare Repeal Bill Does Before They Vote on It:

Once again, it appears Republicans are about to vote on a bill to repeal Obamacare before anybody can figure out what the legislation actually does. On Monday afternoon, the Congressional Budget Office announced it would not able to complete a full score of the legislation submitted by Sens. Lindsey Graham and Bill Cassidy, to which the Senate GOP has now pinned its hopes. Instead, it will release a “preliminary” estimate more or less analyzing whether the plan meets the bare minimum requirements to pass through the budget reconciliation process. That forecast will not include specific numbers about the bill’s “effects on the deficit, health insurance coverage, or premiums.” Those won’t be available “for at least several weeks.”

Republicans need to vote on Graham-Cassidy before Sept. 30, when the reconciliation instructions they are relying on to pass repeal with just 50 Senate votes (plus Vice President Mike Pence’s tie-breaker) will expire. Thus, it looks like the GOP will attempt to pass a bill remaking much of the U.S. health care system without any even-handed, third-party analysis to rely upon. Cassidy’s office has reportedly been producing its own analyses of the bill’s impact; I’m sure they’re incredibly reliable.

Voting blind on Graham-Cassidy would be a good order of magnitude more irresponsible than the House’s shenanigans, though. Many lower-chamber Republicans chose to support repeal on the assumption that the Senate would change, and maybe even improve, whatever bill they passed. If the Senate votes for Graham-Cassidy, on the other hand, the House won’t be able to change it once the end-of-the-month deadline passes. Lawmakers will either have to pass the thing wholesale or effectively shoot it down (technically they could send it back to the Senate with changes, but at that point the bill would require 60 votes to pass). Maybe they’ll wait to find out what the bill does first, but I wouldn’t bet on it.

Weissman continues, Republicans Are Taking One Last Shot at Repealing Obamacare, and It’s Their Most Extreme Bill Yet:

There is pretty much one thing you need to understand about the last-minute Obamacare repeal bill Republicans are currently attempting to pass before a drop-dead deadline at the end of September. Of the three major pieces of health care legislation the GOP has considered this year, this one appears to be the most extreme—the closest the party could come to ending the Affordable Care Act without actually replacing it.

The [zombie “Trumpcare” bill], put forth by Sens. Lindsey Graham of South Carolina and Bill Cassidy of Louisiana, is different and in many ways more frightening [than the previous two bills]. It repeals Obamacare but does not replace it in any meaningful sense. Instead, the bill would take the money that the government currently spends on the ACA’s premium subsidies and Medicaid expansion and dispenses it back to states in the form of block grants that they could use to fund their own health care experiments, whatever those might be. These grants would likely grow more slowly than the cost of insurance or medical care, thus cutting federal health spending by $239 billion over a decade. The law would also give states the right to waive most of Obamacare’s key regulations, including those that prevent insurers from charging more to people based on their health, so long as they explain their plan to “maintain access to adequate and affordable health insurance coverage for individuals with pre-existing coverage.” (It’s not clear if that plan has to be realistic.)

Some liberal states might try to preserve a system similar to Obamacare in a Graham-Cassidy world—like how Massachusetts had Romneycare before the country had Obamacare. But it would be hard, if not impossible, to replicate the real thing. That’s because the bill’s funding formula is designed not only to shrink federal spending on health care but to shift dollars from predominantly Democratic states that expanded Medicaid under Obamacare to predominantly Republican states that did not [i.e., red state Welfare]. It’ll be a smaller pie overall, and places like New York and California that are inclined to expand health coverage will be getting a smaller slice. 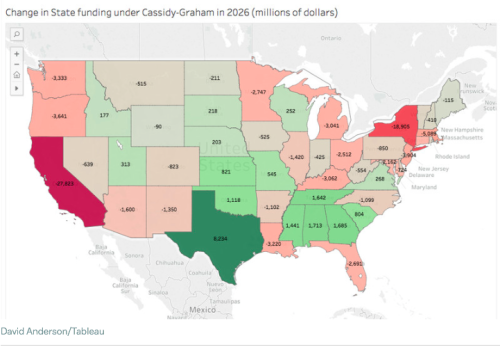 As for states that are generally tight-fisted about safety-net spending? Who knows what they’ll do. Graham-Cassidy lists six different ways states can use their block grant money—but the spending categories are purposely broad, and it’s entirely conceivable that an Alabama or Mississippi would use its money to supplant some of their existing state spending or patch budget holes. This has been a chronic problem with Temporary Assistance for Needy Families, which turned cash welfare into a block grant program in the 1990s, and may be the closest parallel to what Republicans are now angling to do to Obamacare.

Worse yet, it’s a slush fund with a self-destruct function. Graham-Cassidy does not appropriate any money for its block grants after 2026. The cash just disappears.

Finally, all of this is paired with a cap-and-cut approach to traditional Medicaid that is just as draconian as what the most recent Senate bill proposed.

[W]hat we know about the bill already is frightening enough. And in many ways, it’s the perfect capstone to the entire Obamacare repeal process, in which Republicans have struggled to find any sort of coherent substitute for the health care law they want to dismantle. Republicans promised to repeal and replace Obamacare. By lining up behind Graham-Cassidy, they’ve essentially shrugged and said, “Let’s not and say we did.”

The new Republican plan to repeal Obamacare would bring preexisting conditions back to the individual market, allowing insurers to charge sick people higher premiums — or deny them coverage outright.

“You can be charged more for a specific condition,” says Chris Sloan, a senior manager at the health research firm Avalere, of the Cassidy-Graham plan that has begun to gain traction on Capitol Hill.

The new bill has been championed by its sponsors, Sens. Bill Cassidy (R-LA) and Lindsey Graham (R-SC), as giving states more flexibility in how they run their health care systems. One of those flexibilities includes a waiver system that would let states opt out of many key Obamacare regulations.

Those waivers do have some guardrails. The bill says states cannot tether an individual’s premiums to “sex or membership in a protected class under the Constitution of the United States.”

Anything else — a cancer diagnosis, a history of breast cancer, a mild case of asthma — is fair game. In states that did pursue and receive these waivers, health plans would have full authority to charge sicker patients higher premiums to offset their costs.

Outside experts, however, question how strong these protections actually are. For one thing, there is no definition in the bill of what counts as “affordable” coverage. This would largely be left up to future bureaucrats in Washington to decide.

“You could stretch the definition pretty broadly of what counts,” says Sloan. “Maybe you fund a high-risk pool that only allows in some number of people, and that counts. It’s a pretty wide space.”

What’s more, that language does not outlaw discrimination against sick patients. An individual with a history of asthma, for example, could see health insurance plans that want to charge her 10 percent more because they expect she’ll have higher health care costs.

Is that discrimination against a preexisting condition? Absolutely. Does it bar her from getting “affordable” coverage? We don’t really know. That depends a lot on who that person is and what income they make.

The Affordable Care Act offers much clearer-cut outcomes for someone in that situation. An asthma patient wouldn’t face higher premiums under current law. The Affordable Care Act also includes definitions, in law, of what’s reasonable for an individual to spend on premiums given his or her income. It lays all of that out, so you can get a pretty good picture of what the individual market looks like under the law.

That doesn’t exist in Cassidy-Graham. There aren’t definitions of key terms like “adequate” or “affordable.” There is a door swung open to an insurance market that discriminates against sicker patients, with few consumer protections to ensure those people get coverage.

Organizations defending “Obamacare” need to fire up their activist base to write, telephone and email their senators to oppose this zombie “Trumpcare” bill. It’s time for more Senate office sit-ins and earned media events. Do all you can to kill this terrible bill.