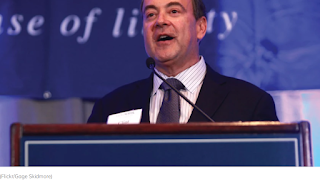 Although the “audit” was conducted by the GOP-controlled State Senate, Rep. Bolick was involved in the post-election maneuverings at the Legislature and received national publicity for her proposed 2021 bill which would permit legislators to nullify Arizona’s popular presidential vote.

Arizona’s Law requested and received a copy of the recusal letter addressed to parties in the case this afternoon.

“Following our conference on the Petition for Review in this matter, I learned that my wife, Representative Shawnna Bolick, was a recipient of e-mail correspondence listed in the privilege log. According, i recuse myself from all future proceedings in this matter.”

The first time the public records cases reached the Arizona Supreme Court was in August 2021, and this is now the fifth time the matters have been in front of the Justices. This time does have to do with the privilege log referenced in the recusal letter.

The Arizona Supreme Court also currently have other cases potentially involving his wife, including the attorneys’ fees award against the Arizona GOP – in which the party’s attorneys are claiming that the Superior Court Judge should be disqualified because he has made contributions to Democrats. Earlier this week, Arizona’s Law reported on a Court of Appeals case regarding Rep. Bolick and others who attend ALEC conferences; that case is likely to be appealed to the Supreme Court. Cases involving educational funding (Prop. 208, Prop. 307) are also either in front of the court or are likely to be.

The political/legal power couple has been the subject of recusal discussion in the past, including in the numerous cases involving the State Legislature. Rep. Bolick is the Chair of the House Ways & Means Committee. Justice Bolick did recuse himself in 2020 when the Court considered Rep. Bolick’s use of a private mailbox on her nomination paper and petitions.

(To read the recusal letter, please head over to Arizona’s Law, where this article by Paul Weich was initially posted.)